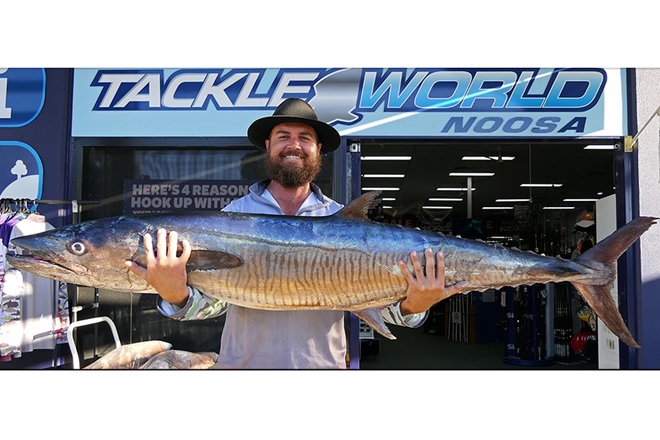 Ben Robertson from Coolum trailered his boat up to Double Island Point on Saturday and spent the morning out on the reef. Unfortunately, apart from one bust-off, nothing much happened until about 11am (which was bang on high tide) but then this 28.5kg spanish mackerel nailed his pilchard floater and made his day. Photo: fishingnoosa.com.au

With some absolutely perfect days over last weekend, anglers were out in force.

Starting with the Noosa River; anglers were out early fishing the last of the run out tide in pursuit of large flathead. Woods bay, Munna point and the river mouth have all recorded good catches with ganged pillies and Entice 3 inch Vibe plastics doing the damage. Fishing the upper reaches was also worth a look with some big girls coming from the first ski run. Sweet whiting have also been in good numbers in the river with the bigger fish feeding hard around the Frying Pan and the mouth or Weyba Creek. Live worms and fresh yabbies rigged on an instinct size 6 bloodworm hooks with a light sinker has enticed some good elbow slappers. Plenty of trevally have also been taken with the night fishing on the incoming tide really firing, darker coloured surface walkers have been good for the surface anglers while live baits have been getting slammed for the bait anglers. Fishing areas like Munna point, Woods Bays and the back of the Noosa Sound have all seen results. Mangrove Jacks are also still in good numbers, fishing around pontoons and structure with live baits or large cut baits like mullet or bonito has seen some great results, for the lure anglers the new Flick Prawn from River2Sea has been worth the money as it is a proven performer.

On the offshore scene, Sunshine reef has seen some very nice snapper, maori cod, trout and sweetlip caught on Squid and Pillies fished on Paternoster rigs.  The live baits have been good for spanish mackerel and Yellowtail Kingfish. Out on Chardon’s reef; Cod, good snapper and the odd jew have been taken on weighted pillies. Live baits under Balloons at about 12 feet have been the undoing of a few Spanish mackerel and wahoo. Hall reef saw longtail tuna and spanish mackerel feeding on the surface, try slugs in the 20 to 40 grams or stickbaits like the Jackson Kaiken 110mm. Up on North Reef, good numbers of gold-spot wrasse, snapper and pearl perch are being caught on weighted flesh baits like Salted bonito fillets and Mullet. Mid water swimmers like tuna, spanish and spotted mackerel and cobia have been smashing unweighted live baits floated out the back of the boat through a good burley trail. For those that did the run to the Hards or the Barwon Banks were well rewarded with plenty of quality snapper, pearl perch, cobia, sweetlip, and cod.

With the weather so good, plenty of angers have been fishing the rocks, Noosa National Park has been very popular with anglers and has seen some outstanding results. Cobia, jew, snapper and sweetlip have all come from the bait anglers whilst those throwing slugs and stick baits tangled with mackerel long tail and mack tuna. On the beaches strip baits of salted bonito or fresh mullet have accounted for good catches of dart, jew and some big bream. Trevally have also been surfing the waves chasing small bait fish so casting slugs and plastic’s has picked up some good fish. Whiting are still plentiful all the way up the coast as are dart, worm’s prawns and pippies are all ideal baits.

In the fresh water; Lake McDonald has been good for small saratoga and bass on Ecogear ZX blades fished around the weed edges. Bass have been hitting surface frogs like the Zman finesse frogs fished over the lily pads near the botanical gardens. In Lake Borumba, bass have been taken on Ecogear grass minnows fished in and around the weeds. Saratoga are being caught on surface using lures like the Strada 70mm Dancer and Zerek Gandalf Frog.

Davo’s Social Fishing Comp is on again starting Friday 25th of May with entries available at any of our Davo’s Tackle Outlets. Come in and grab an information sheet at any of our stores.