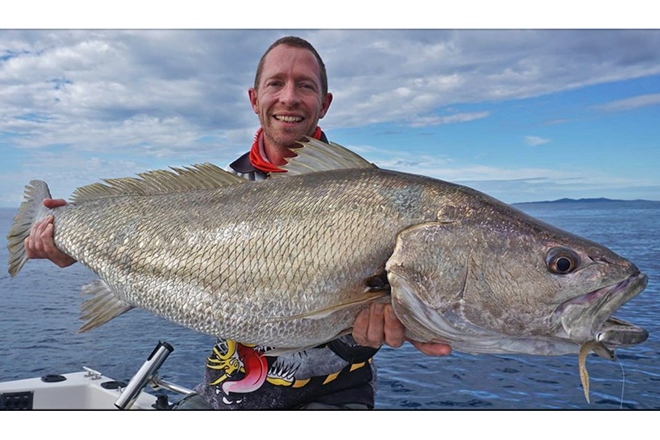 Perfect days to be on the water around Noosa

With the exceptional weather we have been having around Noosa, the offshore anglers have had a field day. The only negative is the grinners. These green-eyed devils are in huge numbers and will be the first on your bait, with their multiple rows of needle teeth they are leader destroyers and one will see you re-rigging. On the plus side they make excellent burley so whip a couple of fillets off them and chop them up for a great burley. Sunshine reef has fished well for Snapper, Pearl perch, cobia, tusk fish, Lipper and trout. Chardons has had Snapper, Moses perch and Mulloway. The banks have fished well for Amberjack, coronation trout, Snapper, Cobia, tusk fish, Moses perch and Pearlies. The Hards has fished well for Snapper, Tusk fish, red emperor, pearl perch, Hussar, cobia and Mori cod. North reef has had Cobia, Pearl perch, Moses perch, snapper and tusk fish. Double island point has had Snapper, Red emperor, tusk fish, pearl perch and cod. The whales are out in force with reports of pods only a couple of hundred meters off Double Island. If you are doing a run out at night make sure you have the spotty as there are plenty about.

In the river there have been some big whiting caught this week with good numbers reported. The lower end of the river and Weyba creek was the best spot for a feed. The last of the run out tide has worked the best, the river mouths’ deeper channels has also claimed some nice fish. Live worms, peeled prawns and squid tentacles have been the go to bait for catching a feed of these tasty fish. Bream are being caught in great numbers at the moment, and it seems you the jetties all along the river are holding huge numbers of fish. Once again Cranka Crabs have smashed the bream this week. If lures are not your thing try baits of Mullet gut, white bait and pilchards. Remember burley, burley, burley and more burley. It is essential when targeting bream. Big Johns and the Stimulate range are two of the best. Trevally queen fish and tailor have all been caught on the surface this week. The Tewantin stretch of the river, Woods Bays and Munna Point have all produced good fish. Flathead fishing has been very good, with some really nice fish being caught. Plenty of large breeding female flathead have been landed this week, if over 75cm these fish must be returned to the water as soon as possible as they are the breeding stock. Upstream from the Tewantin Boat ramp has fished well as well as the deeper channels around the river mouth. Live baits have claimed some great fish with herring, mullet and prawns all getting the job done. Fish these baits close to the bottom with a runout tide for the best results. If you are into working plastics the new Entice range of plastics have claimed some great fish this week. With a good colour range and realistic action these plastics have been slaying the fish.

Beach anglers have again had fantastic conditions over the last week with the northern end of Teewah Beach fishing well. The beach is steep and there are some really nice gutters in close at the moment Bream, flathead, whiting and tailor have all been caught in this area. Prawns, worms, Pipis and pilchards are working well. The headlands have fished well and some really good results have been reported. These points have good concentrations of fish at the moment Bream, Tailor, luderick, gar fish, kingfish and legal snapper have all been landed this week.  Try mullet, bonito, squid strips or whole pilchards.

In the Dams: Borumba Dam has been a little slow in the middle of the day but has fished well morning and afternoon, Bass and Saratoga have been caught in good numbers. The bays and upper reaches of the two main arms have also fished well with schools of fish holding in the shallower water.  Lake Macdonald has also fished well with bass caught around the botanical gardens and the bubble line as well as the North facing bays across from the dam wall. The Entice assault vibes have been extremely popular amongst anglers as well as the Temco Soft Cicada.

Now for all the  latest information log onto www.fishingnoosa.com.au for up to date bar and fishing reports, don’t forget to drop into Davo’s Tackle World in Noosa or Davo’s Northshore Bait & Tackle at Marcoola to find out where the fish are biting, and remember