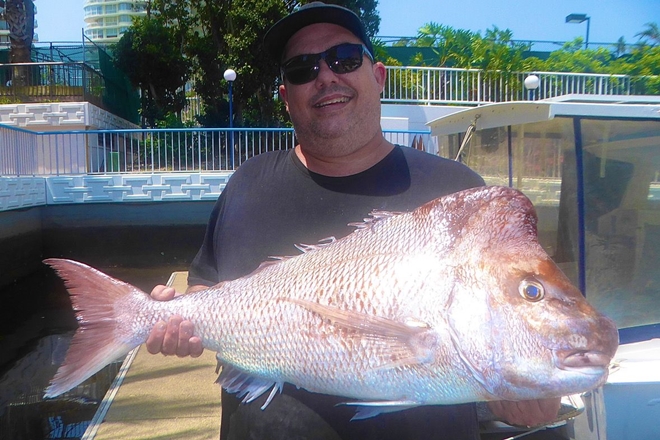 Hi Everyone, hope you’ve all had a great week, the Tweed and Gold Coast just keep on turning on perfect weather for getting outdoors and enjoying our awesome part of the world. The New Year’s crowds have slowed down a bit with lots of people heading back to work this week making fishing conditions a bit nicer on the water with a bit less traffic. Let’s see what action has been happening this week.

Customers are having a good run landing plenty of Black Marlin and Dolphin Fish from the Tweed and Gold Coast this week. Off the Gold Coast Dave Faizzo did well landing his first ever Black Marlin fishing the 36 fathom fad off Surfers Paradise (see photo in report). Boats are reporting multiple strikes and fish caught and released which is great news to see good numbers of fish moving through the Gold and Tweed Coast reefs. The fad on the 24 and 36 fathom reefs have been holding good sized Dolphin Fish as well and Black Marlin, also work the 36 fathom line, spot X and the 50 fathom line to find good fishing. Always be on the lookout for surface activity, birds working bait schools and the skipper keep an eye on the sounder for any signs of life.

Current permitting the 18 and 24 fathom reefs have been producing a great feed of Snapper for those willing to get up early and take advantage of the sunrise bite in perfect weather. Leigh (see photo in report)  did well fishing with Wayne Young last weekend landing a cracking 93cm Snapper. A mixed bag of Snapper, Moses, Tusk Fish,  Maori Cod, Trag and a few Jew Fish have been caught float lining WA Pilchards, Squid, Live Yakka’s, Butterflied Yakka’s or Mullet Fillet. Sinker size is important, just use enough weight to get to the bottom as you want your bait to float down at a slow pace to attract a bite on the way down. Soft plastics have also produced some great Snapper on the drop and also dead sticked by leaving you rod sit in the holder and let the boat move up and down on the swell do all the work.

Reports of some quality Mangrove Jack have been coming in this week, the warm water temp up the rivers is making them quite active. The Coomera River holds some top quality fish, try the Highway Bridge, Regatta Waters boat ramp and rock bar, Railway Bridge for those with boat access.  Also next to our shop at the end of Shipper Drive, Santa Barbara boat ramp, Coomera Waters boats ramp and jetty or the Hope Island Bridges are all worth a go. Other good spots are Sovereign Island, bridges at Paradise Point, Runaway Bay canals and the Nerang River bridges, pontoons and rock walls. Live Mullet, Winter Whiting, Herring or Pike are great. Also throwing a mixture of Zman plastics and Zerek hard body lures have been working a treat for those that prefer to fish lures.

Smithy from Brad Smith Fishing Charters reports on the Tweed the surface action continues at the middle to upper area of Tweed River  with Whiting, Bream and Flathead getting caught on daily charters with MMD splashprawns and Bassday Sugapens. There are some shallow sand banks which are holding good numbers of Whiting. Mangrove jacks will feed aggressively as the water keeps warming, especially if the river experiences some decent rainfall.

Clint reports in the Broadwater the Mangrove Jack action has been insane on evening charters in perfect weather. We have boated 24 in the last month and 10 in the last three trips. The river water temperature is now over 29 degrees on the run out tides, speeding up their metabolism, and they are very hungry. There seems to be Jacks at all spots in the river hunting schools of Mullet and Whiting at night. All jacks on our charters are released unless gut hooked, as we believe they are too nice a fish to catch once.  There have been big jacks too with a good number of fish measuring 57 to 60cm. They’re all fat and healthy looking which shows what a healthy system we have. One night we had a fish that looked 70cm plus bust the leader right next to the boat. The ups and downs of jack fishing! Apart from the red devils, we have been catching Whiting, Blackspot Tuskfish, Flounder, the odd Flathead,Tailor, Tarwhine, Bream, Squire, Grassy Emperor, Spangled Emperor, and a lot of Squid. Best lures have been Ecogear ZX40’s in the colours 440, 411 and 441. We smear a dab of Sax scent goldprawn all over the blades for added effect. Best baits have been live beachworms and yabbies. Deeper areas on the edges of the main channels are where the fish are holding, due to the water traffic and clear water.