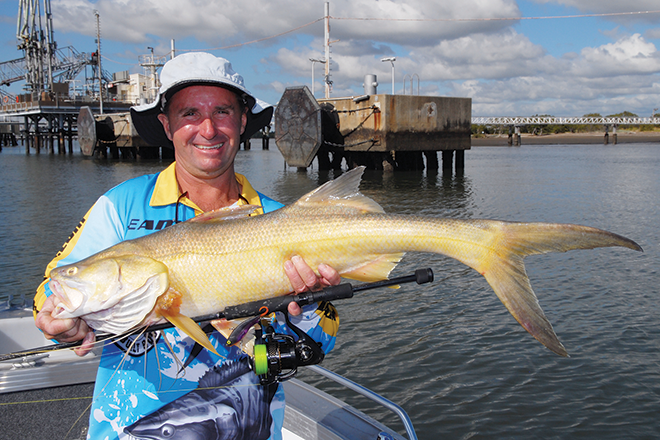 Rob Payne with a quality threadfin salmon that fell to a Zerek Fish Trap.

WE have managed to venture out during the past month but with daughter Selina starting prep this year, our midweek sessions are now somewhat limited. Sneaking into some of the back waters in our backyard of Brisbane and the Gold Coast has been fruitful and we have managed to catch a few fish.

The whiting fishing has certainly been going very well, with captures taken in all the standard haunts from the Council Chambers in the Nerang River right through to the Slipping Sands area in the north. Baits of bloodworms and yabbies have accounted for this delicacy of the estuary and we’re lucky that whiting are available right through the year.

We’ve had a few trips with the kids and tried one of our favourite spots in the Coomera River only to catch a couple of small bream and a stingray, which was quite disappointing, but the kids were fascinated by the ray. After moving around the area and trying some more spots we decided to pull stumps and head further upriver to anchor on the edge of a bank we had fished previously.

With worm baits cast out we didn’t have to wait a minute before the first whiting took the bait, followed by another 20 in reasonably quick succession. Our children Selina and John had a great time, though after an hour the air temperatures had risen substantially and the kids understandably started the grumbles, which meant it was time to go.

Night fishing remains good and when daytime temps are up, it’s certainly a lot more comfortable on the water. My husband Robert has fished the Nerang River using yabbies on several occasions and has done quite well. On another front, the fishing in the Brisbane River has been very productive, with plenty of salmon and jew showing up for those fishing the drop-offs and flats.

The Brisbane River is a place we surprisingly hadn’t fished in a very long time, however Rob managed to put in a couple of sneaky mornings of fishing prior to work and had a blast. Live bait would obviously work, though on these occasions he used Zerek 95mm Fish Trap lures in conjunction with 20lb SureCatch fluorocarbon leader and a prototype deepwater flathead jigging rod from Wilson Fishing.

When using bait it’s often a matter of just casting out and leaving the bait sit until a fish actually bites. Lures have to be ‘worked’, with the angler imparting action into the lure to make it appear lifelike and appeal to the target species.

Working baitfish schools and ledges (where shallows drop off into deep water) is the norm, however on this occasion only fish and no baitfish showed on the sounder.

Using the electric motor to hold position while casting is an ideal and easy way to fish. An area can be worked with lures before moving upriver or perhaps drifting back to cover another spot. Always be mindful of your sounder screen, and if it looks like a flat wasteland, hold your cast until something interesting shows on screen.

Threadfin salmon are beautiful-tasting fish, and when we’ve caught them up north they’ve always gone into the icebox ahead of barramundi. I love eating them, though I’m dubious about consuming anything from the Brisbane River after seeing the toxic waste that has washed into the river from areas including Rocklea during the floods.

The chemicals washed into the river usually sit on the bottom and are consumed by species at the bottom end of the food chain (such as prawns). In turn, predators ingest these fish/prawns and the chemicals can be found in the fish’s flesh. And unfortunately, the larger the fish, the more chemicals. People generally say a good flood will clean up a river, however when there is oil, poisons, acid and the like washed in from industrial workshops, the outcome won’t be good for the fish population.

When it comes to delicacies, the banana prawns are on in very good numbers in the Jacobs Well/Cabbage Tree Point region. If you are in the right area you will see ‘clouds’ of prawns showing on the screen (including the bottom where they obviously feed). If you don’t see the prawns it’s usually a waste of time making a cast with your net.

I hate to say it but when the prawns are on and you are Johnny on the spot, make the most of it because social media can really stuff it up. Where there might be 20 boats one day, one post on social media can mean the numbers swell to quadruple that quick smart. It gets crowded and some people can get very cranky.

Having said that, plenty of prawns and the bag limit of a 10-litre bucket can be easily achieved. We keep them in an icy seawater slurry and also bring home a bucket of fresh seawater to cook them in. When the water is brought to the boil, put the prawns in and a few minutes later the cooked prawns will have floated to the surface.

Take them out and reduce their temperature quickly to stop them cooking by putting them in iced seawater again, which will help them keep their flavour. All these species will continue to be caught in March, so get out and get the boat wet!

Leeann Payne has been writing for magazines for over 20 years and specialises in beach, estuarine and fly fishing. She has fished around Australia and has caught a large variety of species from marlin, sailfish, bonefish and barra on fly tackle to reef, pelagics and impoundment species.
Previous Great Fishing off Gold Coast
Next Clark Boats Releases New Side Console