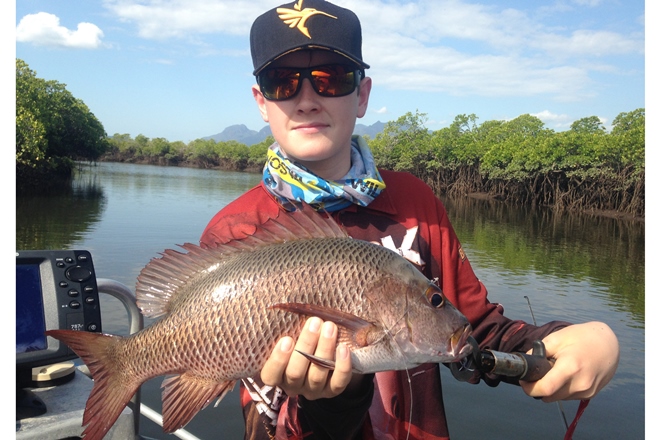 At 49cm, this jack was a new PB for the author.

Pointers from Pilgrimage to Hinchinbrook

MY family and I recently made our annual trip to Hinchinbrook Island in north Queensland.

Hinchinbrook is 150km north of Townsville and is a two-day drive from Brisbane, or about 20 hours in the car. On the first day we drive to Mackay, which takes about 12 hours. We stay there overnight and then jump back in the car for roughly another seven hours of driving until we see the big island loom up in front of us. Hinchinbrook is 35km long and nearly all the shoreline is made up of either boulders or mangroves. Myriad fishy creeks can be found on the mainland and running off the island, with additional awesome offshore pelagic and reef fishing options as well as the front headland and sugar loading jetty.

However, fishing here is not just a matter of turning up. Dad has fished these waters every year for the past 15 years and has been coming to Hinchinbrook since he was a kid, so he has a fair idea on when and where to fish. I have been going to Hinchinbrook every year since I was nine months old and I’m 13 now.

Dad and I immensely enjoy casting lures at timber. We love the anticipation of whether a mangrove jack, barra, cod or whatever other fish lying on that bit of structure is going to grab our lure or plastic. The lures and plastics we have found to perform the best are the Lucky Craft Pointer 78XD and Bevy Shad 75; Atomic Shiner 75DD; Killalure Flatz Rat 75; Zerek Ripper Diver 90, Live Shrimp Hot Legs 3” and Flat Shad 3.5”; Z-Man 3” MinnowZ, 3.75” StreakZ and 4” Curly TailZ; and Berkley 3” Minnow Grubs and 3” Minnows. These lures and plastics are more effective in either natural or green and red colours.

Deep-diving lures are essential and you want your lure to dive deep as quickly as possible because fish usually sit in the deepest part of the snag. Nothing gets your heart pumping like seeing a snag with mangrove jack written all over it, letting fly with your lure, retrieving it deep into the snag knowing that at any moment your offering could get belted, hooking up, wrestling the fish out of the snag and sliding it into the net. I find the most enjoyable part of the experience is watching the fish swim back to its home unharmed.

Some of our most memorable sessions from the recent trip consisted of drifting up creeks with the electric motor in the early morning or late afternoon on an incoming tide. We caught many jacks, cod and trevally fishing this way. We fished prior to the saltwater barra closed season and they were fairly quiet this year, but the ones we took were hooked on these tides. We had quite an unlucky year, losing many big barra and jacks. In one textbook case, a metre-long barra was smashing bait up the bank within casting distance. I drilled a Z-Man 3” MinnowZ rigged on a TT 2/0 1/6oz jig head exactly where it needed to be and the massive barra absolutely snotted it, took off into the middle of the river and shook its head until the hook fell out. That was very disappointing to say the least.


The best barra of the trip (caught by yours truly) was landed off the bank at night. Good thing there weren’t any snapping handbags around because to land it I had to stand in the water. Yes I know the dangers of crocodiles but we didn’t have a net and I wasn’t going to lift the fish up a rock wall. After a few quick pics, tagging it and removing the Lucky Craft Bevy Shad, the barra was safely released to fight another day.

The main thing I love about casting lures for jacks is the initial, unmistakable hit. Jacks just smash the lure with one thing on their mind: snag, snag, snag! Whether it be a sunken log, mud clump or rock bar, a hooked jack will head straight for it. The best jack of the trip was taken by my old man, beating me by a centimetre. Dad and I both scored PB jacks this trip; mine being 49cm and Dad’s coming in at 50cm.

Each year we try to get around the front headland to do some jigging and bait fishing for trout, nannygai, cod and grunter and we usually get golden and giant trevally as by-catch. Things were fairly quiet around the front this year and while we landed loads of just-legal nannygai and wire netting cod, we released them with a tag and sent them on their merry way.

You might be wondering what sort of tackle to use when snag bashing around Hinchinbrook. I like to use baitcasters for hard-bodies and bigger plastics and 2500-3000-size spin reels for other work. When choosing a rod, you want something with a bit of poke, and the lightest you’d want to use is 6kg and the heaviest about 10kg. My preferred heavy setup for throwing hard-bodies is a Daiwa Saltist HRF spooled with 12kg Mustad Wish braid and paired with an 8kg Wilson Live Fibre Territory Barra rod. I also use a Shimano Caenan reel spooled with 9kg Rovex braid and matched to a Wilson 6kg Blue Steel Baitcaster. For throwing smaller plastics I employ a Shimano Stradic CI4 3000, 20lb Rovex braid and a Daiwa Swamp Donkey rod. When throwing bigger plastics I use a Shimano Calcutta 250B filled with 28lb Mustad Wish braid on a Shimano Tcurve 6-10kg baitcast rod.

Every year while at Hinchinbrook we try to do a trip to somewhere we’ve never been before. This year we went to Blencoe Falls. It is an amazing drive through rainforest and then grasslands and eucalyptus forests on top of the plateau. You need a four-wheel-drive to access the area because 75km of the drive is dirt and potholes.

Of course, we brought fishing rods to have a throw in the fresh water. It was satisfying enough just standing in crystal-clear, knee-deep water surrounded by boulders and pine trees and watching little sooty grunter follow our lures. Dad caught a little one but the camera was in the car, about 250m up the track, so we’ve got no photos to show for it.

Hinchinbrook Island is an amazing place with an awesome fishery and stunning scenery, and it should be on everybody’s fishing bucket list. It can’t be too bad if we keep going back every year. Until next time, tight lines.