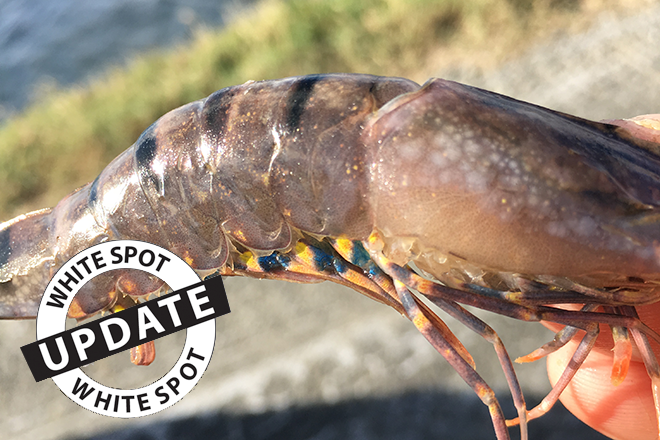 AUSTRALIA’S fight against white spot disease reached a significant milestone recently, with no positive test results returned for the past six months from samples of farmed and wild prawns and crabs in Queensland and NSW.

Deputy Prime Minister and Minister for Agriculture and Water Resources Barnaby Joyce said it demonstrated the effectiveness of the Government’s decisive response. “More than 25,000 samples of farmed and wild prawns and crabs have been tested in Queensland and NSW and it has now been six months since we last had a sample test positive,” Minister Joyce said. “The latest tests conducted by the Queensland Government in the Brisbane and Logan rivers as well as in the Moreton Bay areas also returned negative results. We understand that there is still a long way to go in rebuilding the prawn farming industry in the Logan River and confirming the disease has been eradicated from our waters, but this is a positive milestone that shows we are on our way.

“These results show the current surveillance and management activities, as well as the enhanced import conditions that were put in place, are helping us effectively manage it and we remain committed to getting rid of this destructive disease. It is good news for our $3 billion dollar fisheries and aquaculture industries and our marine environment, but also reflects the strength of Australia’s biosecurity system in helping us respond to significant biosecurity risks. The Government also recently finalised contracts with payments commencing to provide $20 million in financial assistance for six prawn farms in the Logan River area.”

The assistance package will help reimburse costs for prawn farmers in the initial response to the white spot disease outbreak, including recognition of the stock destroyed, as well as the costs of their farms being out of action for a season as part of the agreed eradication response plan.

“The Government remains committed to working with industry and the states to eradicate this outbreak and support a bright future for Australia’s valuable and important prawn industry,” Minister Joyce said. “I know other businesses are affected by this outbreak and call on the Queensland Government to consider how it can better support commercial fishers and businesses impacted by its Movement Control Order.”

The department is also undertaking a review of the biosecurity risks of, and import conditions for, prawns and prawn products for human consumption. The review will include a comprehensive scientific analysis of the biosecurity risks associated with prawn imports from all trading partners and is expected to take up to two years. The current enhanced import conditions will likely remain in place until the department’s review is completed.