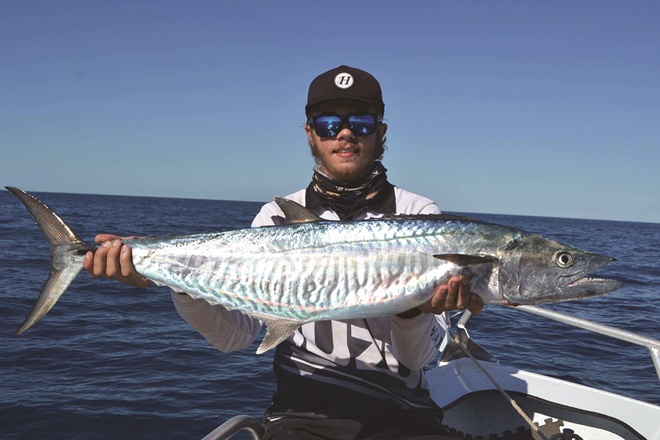 A great spanish mackerel caught on a live slimy mackerel.

IN the build-up to winter, the Bundaberg area was experiencing little to no good weather for offshore fishing, and when a weekend finally arose, other commitments prevented me from heading out.

But at long last a weekend came along when nothing stood in the way and once Friday night arrived, the boat was packed and the alarms set for the morning to come, with hopes of achieving success offshore. When planning my trips offshore, being aboard a 5.2m vessel means I still have to be fairly conscious of weather changes, whereas bigger boats often have a greater threshold of when to ‘call it quits’.

This means planning is involved when it comes to getting the most out of a day on the water, and going to the extent of planning for a weather change before it’s forecast. Let’s face it, as much as we like to hope the prediction is spot-on, weather can change in an instant and quite frankly leave you with aches and pains from a bone-shattering journey home in a rough sea, or worse, a life-threatening incident.

Another consideration to definitely be on the safe side of is fuel. Unlike in a car where running out of fuel can simply mean phoning a friend to bring a jerry can, being at sea with no fuel can mean drifting aimlessly or anchoring until you find a way of getting out of danger. With the new technology of electronic engine gauges, life is made easy with an economy average displayed on the screen.

With a standard analogue gauge or no gauge at all, it is important to work out your engine’s economy for planning trips that could potentially stretch the limits of your fuel tank. I like to calculate the fuel consumption of my total predicted distance travelled using the worst possible consumption numbers. This ensures I have enough fuel to make it home in the worst of the worst conditions. There’s no excuse if you’re the silly one who didn’t account for a swell coming home.

With this in mind, I planned our trip heading due east with the predicted light southwesterly wind at our back. I then planned for us to make our way through a number of reefs to end up northeast of our starting point so that if and when the wind swung around to the north as predicted later that evening, we would be able to come home with a following sea.

A plan is something most people might make up on the day, which can be an exciting way of going about a trip offshore, but I know confidence in a well-thought-out plan can be the difference between catching fish and not, however, safety is always the priority. If you believe that where you are and what you are doing is right, then you’ll try your best to catch fish as opposed to giving it one drop and moving on if you don’t land that trophy fish straight away.

After putting the plan into motion on Saturday, we were blessed with a beautiful calm morning on the water, so plenty of boats were out. This of course meant I had to position the boat on a good patch of reef that wasn’t already occupied by another boat. After some sounding around, we anchored on a likely looking patch of structure before starting to fish. I deployed the one and only live bait captured on the way out, so I hoped it caught us a beauty!

Before even finishing tying my bottom rig, the live bait was smashed and we were on. Taking the telltale burning run of a spanish mackerel, I knew the morning would be kicked off well if I could only get it in the Esky. Sure enough, it was a beautiful eating-sized spanish mackerel weighing about 10kg.

We continued to hammer this spot on the bottom, but as the tide slowed for the turn, even the pesky tea-leaf trevally stopped biting. I decided to reduce the size of my ball sinker right down to something that would steadily reach the bottom and keep the bait looking as natural as possible. With a sizeable strip bait on my snell rig, I floated it down. I got some subtle but decent thumps, and soon enough they converted into something solid.

Fishing in fairly sharky waters, we had to make quick work of any fish hooked, so whether big or small, any fish was a battle. Finally the fish surfaced and it was a lovely surprise of a small cobia measuring about 70cm, which we released after a quick photo. Next drop led to hook-ups all around the boat, with almost all of us blown away and busted off by some big brutes suspected to be larger dirty-fighting cobia.

I upped the ante and sent down another bait with a locked drag and my game face on. The fish were giving the subtlest bites before launching into one hell of a fight once hooked. I had hooked up and was being stretched by a much better model. When I bought my Shimano Torium 20 with 80lb jigging braid, I felt as though this combo was almost unstoppable, but when this fish was truly stretching my arms I began to think otherwise.

I managed to turn its head and won the fight, this time landing a great cobia over the metre mark, weighing about 10kg. This fish was by no means ‘big’ by cobia standards but the epic fight means they are excellent sportfish at any size. The cobia seemed to have moved on, so after playing around with micro jigs on bottom species, we were almost ready to leave when Leeah’s quick thinking had her hooked up to something that busted up at the front of the boat.

Judging by the screaming runs and endurance, it was obviously some kind of tuna, but after a good 10 minutes of fighting and still no sign of the fish, we began to wonder how big this fish was. Finally we saw colour and as the fish neared, the telltale long pectoral fins and yellow stripes made it clear that Leeah had hooked a passing yellowfin tuna. After getting fingertips to the fish’s tail time and time again, followed by blistering runs, the fight was nerve-racking as we knew tackle failure was a big possibility after a long fight, especially considering it was only a 20lb barramundi fishing outfit.

Eventually I got a good grip on the fish’s tail and landed it. What an epic and beautiful fish! Another hard-fighting brute was added to the day’s tally. After such an enduring fight, the fish still managed to give us all a shower as it kicked off on release.

We next moved to a number of other reefs where nothing spectacular was landed but a few quality fish were definitely added to our bag. As predicted, the wind began to get up from the northeast, and knowing we had quite a journey ahead of us, we decided to head for home. My plan had come together like clockwork, and instead of an uncomfortable, wet journey home, we had the chop to our back and got home with no trouble whatsoever.

Any day on the water is a good day, especially when some quality fish come over the side, but everything is made easy with some planning. Knowing safety is priority, you should always consider the essentials before embarking on a trip offshore.

Joel is blessed with the fish-rich coastline and waterways surrounding the Bundaberg region. With an array of options and possibilities around, he favours the shallow flats and small creeks and specialises mostly in lure fishing. Joel loves to broaden his abilities with new concepts and techniques, so feel free to email him at jmj-31898@hotmail.com
Previous $35,690 in fines for Brisbane black market fishers
Next Canoe sailing on Somerset’s dams