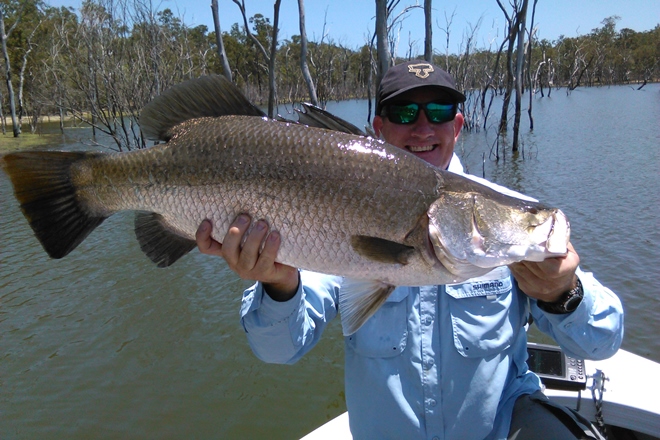 Dale Smith with the 88cm barra he caught at Lake Monduran last weekend.

What a difference a good bit of weather makes to the Bundaberg area!  Last weekend was one of the first weekends in a long time that the reef boys could get out and try to target some quality reef fish.  By all reports the boats that ventured out from Burnett Heads and 1770 all caught a good feed of coral trout, sweetlip, parrot and some nice red emperor. It seems that the sharks that also live on the reef are still around in good numbers.  Anglers reported that any of the better fish that were hooked were usually taken by sharks.

This weekend’s forecast at the stage is looking similar to last weekend.  Light northeasterlies are predicted all this week and with the full moon on Thursday night, this should stir up the prawns, crabs and the fishing as the weekend gets closer. The hot news last weekend was that the prawns showed up again in the Burnett River.  The quality of these prawns is just amazing and the boats that were casting didn’t take too long to get their bag limit of a 10ltr bucket per person.  So, let’s hope they stick around for a bit longer.

As these northerlies kick in and the daytime temperature rises, targeting species like mangrove jack will be high on the agenda for lots of anglers.  I guess we are lucky that all the local rivers around Bundy have healthy populations of jack and they have all been producing some real crackers both on live bait or on lures during this past week.  As well as jack, the Burnett continues to perform with good numbers of grunter, flathead, estuary cod and northern and summer whiting all being landed in this fantastic river system.

The warm winds will also enhance your chance of catching a big barra from Lake Monduran.  I took a local doctor up to the dam last Saturday and had a great morning with both of us hooking up barra between 80 and 90cm.  Both fish were hooked on Zerek Flat Shads.  These soft plastics have a unique action and barra just seemed to smash them.