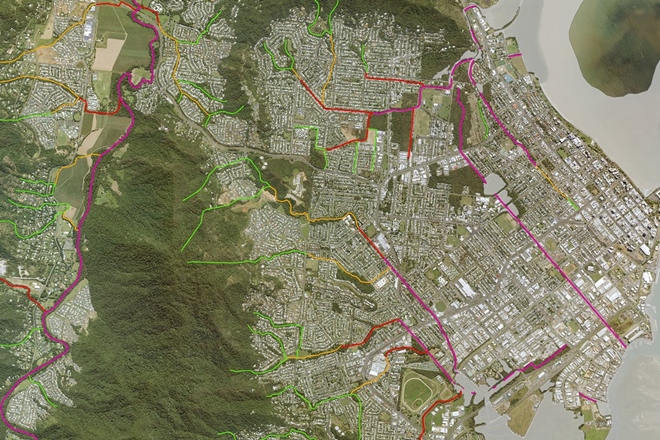 DEVELOPERS and government agencies now have access to updated maps of Queensland waterways, which determine their importance for the passage of fish.

Fisheries Queensland biologist Ian Draper said revised Queensland Waterways for Waterway Barrier Works data has been released and is available free online. “This mapping product categorises all rivers, streams and waterways through Queensland and ranks their importance for fish passage,” Mr Draper said. “The information is used widely by the development industry, state and local government agencies when preparing development applications and designing new crossings such as bridges and culverts. The data assists landholders and developers who are planning to build dams, creek crossings or other potential barriers to fish movement with a simplified way to determine whether their properties contain a waterway. Queensland’s nearly 1.2 million waterways are colour coded to show the potential adverse impact of instream barriers on fish movement, and the maps also help determine what type of development approval is required for waterway barrier works to proceed.”

As part of the update, significant areas of stream mapping have been amended, including:
• A complete remapping of the Cairns central business district and surrounding suburbs;
• Correction of some drainage paths around Mackay and Bundaberg; and
• Improvements to mapping of wetland areas on Brisbane’s southern bayside.

Mr Draper said the number of notifications to Fisheries Queensland under a self-assessable development code had increased significantly since the waterway barrier works mapping was first released in 2013. “This indicates that the mapping is helping landholders, local councils and other state government agencies construct fish-friendly crossings quickly and cost effectively,” he said. “The latest version of the maps will further help developers by reducing potentially unnecessary development assessment referrals for areas that had been incorrectly mapped. In another significant change, the updated data highlights the importance of smaller coastal streams that flow directly out to estuaries. These are valuable fish breeding and nursery areas for Queensland’s commercial, recreational and indigenous fishers. There is now a slightly higher classification for these important small coastal streams and construction of minor dams or weirs at the critical tidal interface will also now require assessment.”

The revised mapping is available for free public download as an ArcGIS shapefile in the QSpatial database (qldspatial.information.qld.gov.au). The mapping has also been made available online, without the need for specialist GIS software, which creates fewer barriers for public use of the mapping. The latest waterway mapping can be found at arcgis.com Review of the mapping is ongoing, with future revisions to be released as required.

For more information on fish passage in Queensland, visit fisheries.qld.gov.au or call 13 25 23.