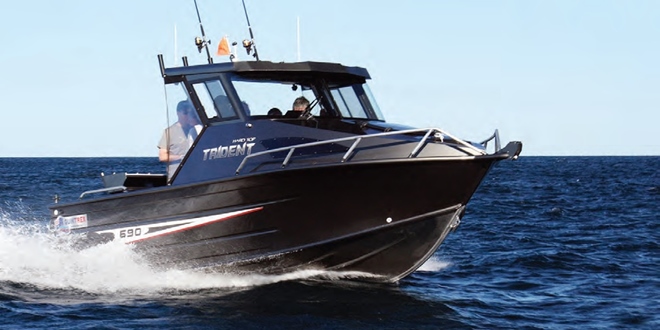 Mild offshore conditions didn’t even look like fazing the 690 HT.

THE savvy folk at Quintrex decided that with so many new boat releases, they’d best make the media day launch for the Quintrex Trident Hard Top a special one. We were given the grand tour of Quintrex’s enormous manufacturing facility at Coomera in southeast Queensland.

We were not only allowed up-close-and-personal with the boats, but actually got to see the various stages of a Trident HT from a bare sheet of aluminium to a fully fledged offshore warrior. Quintrex said an influx of big-boat buyers prompted the move to add a hard top to its 650 and 690 Trident plate boats.

The effort seems to have paid off, with buyers from as far afield as Darwin and Far North Queensland already placing orders. The Tridents are true plate boats, with a stretch-formed 5mm bottom and 3mm topsides. Quintrex has its own unique stretch forming and hardening processes, meaning we weren’t allowed to take any photos of this stage of the build.

Everything else was fair game however, and it was incredible to see how these boats are made. Between 60 and 70 hours of welding are involved in building a Trident from start to finish, many more than a regular pressed-aluminium boat. Despite this additional time factor, the 30 plate Quinnies being built every month is double the output of plate boats from the factory just one year ago.

This is predominantly due to demand but also more efficient manufacturing processes that have evolved with experience. A key factor in the design of the new models was weight, as the hard top adds a lot of it. To adapt to this extra weight in the forward half of the boat, Quintrex reversed the locations of the kill and fuel tanks in models with a solid roof.

In regular Tridents the fuel tank sits quite a way forward and the 135-litre kill tank is mounted at the stern, however in 650 and 690 HTs the fuel tanks are 180 and 200 litres respectively, meaning the heavier fuel tank (when full) is moved back and the kill tank is forward of the driver and passenger seats.

This was a decision made purely for better performance, achieved by alleviating weight from the forward half of the boat. Another important factor in the design and manufacture of the new boats are gibs. They are not gussets nor ribs, but are instrumental in achieving a strong and perfectly formed hull.

Specifically, they are ready-made and moulded V-shaped struts spaced about 500mm apart and running horizontally the entire length of the hull. Once fitted and welded, the boat’s hull is pressed into place against each gib, setting its shape.

Double welded at the front of the boat for strength, the gibs are quite possibly the most important part of the whole process, as without them the boat could end up with a deformed or sub-par hull. Quintrex planned to make this media day different from the rest and it was actually a hands-on experience.

The fluff and rough scribes from a variety of boating and fishing magazines and websites had the opportunity to weld an aluminium plaque featuring our publication’s name. We used a twin-pulse welder, the same as that used for building most of a Trident.

Only the transom is not; it is tig welded for strength and a more refined finish. After moving through the rest of the Trident’s build procedures including painting and fit out, it was time to hit the water.

Not only were the Tridents the biggest recreational aluminium boats I had ever been in, they were also the fastest, smoothest and quietest. I didn’t get the chance to sample the 610 Trident, so I will focus on the 650 and 690 HT rigs.

After heading out through the unbelievably flat Gold Coast Seaway (which is never close to calm when I go fishing) we tried to give the boats something of a challenge. But despite travelling a few kilometres out to sea, the fresh offshore wind just couldn’t whip up large enough waves to even falter the big Quinnies.

I’m similar to Goldilocks I guess, I don’t like my boats too big or too small, so the 650 Trident HT felt just right. I spent most of my time in this boat and finished with a wealth of appreciation for the work that has gone into designing and making this range so impressive.

Despite four blokes in the boat, it was an absolute rocket when paired with the 225hp Evinrude E-TEC on the back. This is the maximum rated horsepower for the 650, and even though I’m a total speed demon, there is no way anyone in their right mind could want more power for this rig.

With nothing more than a dull roar from the big V6 two-stroke we were on the plane with no bog, cavitation or sink-in at the rear and clipping along at 50km/h. I’m very used to regular bimini-top boats, so the protection the hard top provided was almost surreal. I had to look twice at the speedometer because it felt as if we were travelling 15-20km/h slower than we actually were.

There was no wind buffeting at all and while your speed normally feels quicker on water compared to land, the 650 HT made 50km/h feel how it does on the road – slow. This is partly due to the sheer size of the vessel and how high you sit above the waterline, a fact that is exacerbated stepping into the 690.

It felt as though it was a genuine ship rather than a trailer boat, and three people can easily stand side by side at the helm, fully protected from the elements. Something I found interesting was the power delivery and sound from the two different Evinrudes, as the 690 featured a 250hp ETEC HO (also its maximum horsepower).

While mashing the throttle lever in the 650 with the regular 225 E-TEC resulted in a torquey shove and whopping midrange, the 250 HO on the 690 felt more similar to an elastic band. It didn’t punch out of the hole quite as hard, but once moving it felt and sounded as if it wanted to rev to the moon.

At the helm of the 650 I tried to give it a bit of a workout by attacking a few charter boat wakes and decent waves with the front quarters, the sides and then by following the waves, but the big rig wasn’t even fazed. And though my camera bag was (stupidly) placed under a rod holder that was flush mounted in the gunwale, literally no water made it inside the boat thanks to the new Blade Hull and downturned chines.

There is no doubt it was the driest and smoothest offshore boat ride I’ve ever had. Overall the Trident range offers a lot of boat for the money, with recommended pricing undercutting most competitors without skimping on fit, finish and ability. 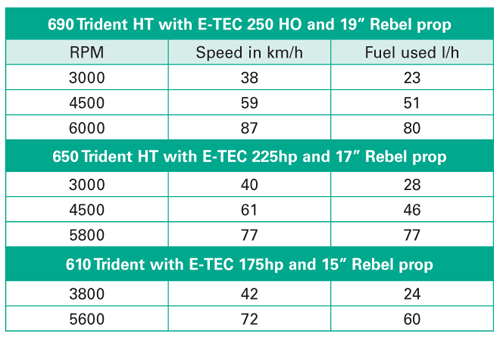 Daniel is BNB's subeditor and occasional fish-wrangler. If you've got a great story or at least an idea for one, flick Dan an email at editorial@bnbfishing.com.au
Previous Moda Marine BV7000 Black Diamond
Next Quality upgrades to Baysport 640