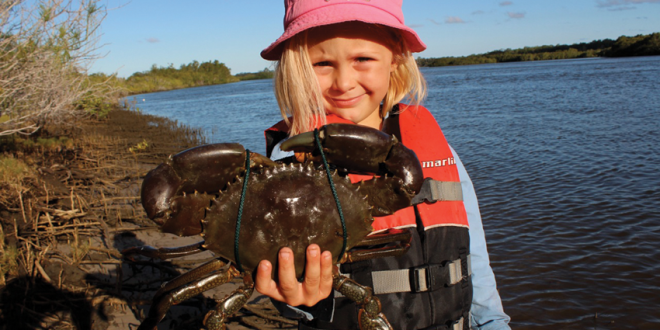 Young Amelia held one of the many quality mud crabs she caught while crabbing with her dad Brendon after recent heavy rain.

WE are well into another year and have finally had good rainfall that will make the next few months great for fishing, particularly in the Broadwater. The only downer at the moment is the strong wind that has made getting to these fish a bit tougher than it should be.

Once we get decent rain on the Gold Coast the first species to get on the move is mud crabs, and boy did they fire up after the recent rain. It was the first time in a long time that a number of my mates had to throw back legal crabs because they were over their bag limits.

All the creeks that flow into the Pimpama and Coomera rivers were best and the day after the heavy rain stopped saw them at their most plentiful. This is common after a couple of days of rain and something all of us who love eating muddies should keep in mind. Mullet and whiting frames were the best baits.

From now until the end of May is the prime time to target mud crabs because they are full and delicious, so make the most of them. Now if you need whiting frames for your crabbing, the good news is the second species to fire up after the rain is whiting.  And after a slow start to the season caused by the dry weather, whiting are on the chew.

The 225ml of rain in the middle of January did the job of flushing out the canals in the Nerang River, and since then the whiting fishing has been nothing short of sensational for both size and numbers.

Best locations at present in the Nerang River are from The Southport School to the Council Chambers but by the time you read this I would include the powerlines stretch of the river and the area around Isle of Capri.
I am sure you know my favoured bait for whiting fishing is bloodworms and good news for whiting fishos is that the bait shop next to the Jacobs Well boat ramp is open again. The new owner Brett can be contacted on 5546 2608 and he can supply bloodworms, making his shop the closest place to the Goldy to buy them.

Another species that loved the wet weather was jew. Plenty of undersize ones are in the deeper holes in the Broadwater, with the better-sized legal fish being caught in the Seaway. My favourite lure for the smaller fish in 4-8m of water is a blade.

A number of mates and I have had great success jigging Kato blades along the dirty water current lines in the main channels to the north of the Seaway. In the Seaway, much bigger baits and lures are preferred. Six and seven-inch white and white/pink plastics, live herrings and mullet are best but even a pillie on a gang of hooks will do at a pinch.

The best time of the tide will always be a change, simply because it makes the fishing a bit easier without the hard-running current in this area. As the water has cleaned up good size trevally have been caught on blades as well. These fish are chasing the big schools of baitfish flushed out by all the rain.

The combination of bait on the sounder and the cleaner water on the run-in tide has been the trigger for finding trevally, and once they hit the blade on the lifting motion you know you have a fight on your hands.

The surprise packet in all this has been a good run of legal snapper in the Broadwater. Again the key for finding these fish has been the combination of the run-in tide bringing in the cleaner water and locating bait with the sounder.

These smaller snapper are very aggressive and smash the little blades as soon as you start the lifting motion off the bottom. The gear used for catching trevally, snapper and smaller jew is very basic. A 3-5kg graphite rod with 6lb braid and 12lb Fammel Rock leader is all that’s needed.

For the bigger Seaway jewfish, a 4-6kg rod with 15-20lb braid and 30-40lb leader will be sufficient. At the moment a few early season tailor are in the Broadwater, attracted by the good quantities of baitfish.

The area between Crab Island and the mouth of the Coomera River is the place to find them. The best spot for tailor south of the Seaway has been the eastern edge of the main channel to Marina Mirage, fishing at the top of the tide or just on dark.

Now I must confess the past couple of months for me with the new boat have been great. After months of deciding what I wanted and how I wanted it put together, I have to say for the fishing I do, the new Haines Signature is perfect. One of the best parts of having a new boat is the toys that come with it.

First of these is my new Garmin 820 combo. My old boat only had a small colour sounder but these new high-definition sounders with CHIRP, side-scan and down-scan ability are amazingly accurate and make finding bait schools and predators so much easier.

When chasing trevs, tailor, snapper, jew and any other predator, finding bait schools means finding feeding fish, and these units make it a breeze. My combo setup is push button not touchscreen but that is my choice because I prefer this for its easier-to-use menu.

This probably has more to do with my age than anything else, as most of the younger fishos seem to go for the touchscreen units. My other new toy that is a big help with my fishing is the Minn Kota i-Pilot.

This thing is amazing and has a built-in GPS that allows you to anchor the boat using the electric motor at the push of a button. This is great when you find a school of fish feeding or a large bait school to work over with some lures or plastics.

The other feature that is very handy is its ability to memorise a track and repeat it if you find a few fish. This feature is certainly going to come in handy as we get closer to winter and those big schools of tailor come into the Broadwater.

All the species mentioned will be around this month, so we have plenty to look forward to and I hope everybody has as much fun as I intend to.

Just remember to fish for the future.

Wayne started fishing seriously 22 years ago, and 19 years ago moved to the Broadwater region on the Gold Coast because it had the best and biggest whiting in southeast Queensland, which is still true to this day. He works most Saturdays at Oxenford BCF and spends almost all the rest of his time fishing and crabbing the Broadwater and the rivers that run into it. Since moving there he has discovered that despite a lot of boat traffic it is still a great place to fish, with an amazing variety of species to catch.
Previous Braised lamb shanks
Next March the month for thumper pelagics