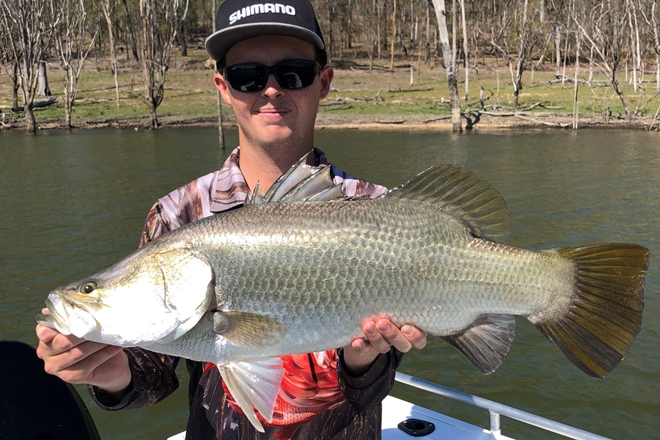 Mitch Beyer with the nice barramundi he caught at Lake Monduran last weekend.

For the anglers around the Bundaberg area, the schoolie mackerel have turned up in awesome numbers over the past couple weeks.  Fast retrieving Flasha spoons off the bottom and sinking pilchards on gang hooks will get you the numbers.  I usually don’t use anything over 60lb leader just to get the bite.  Also some of the size of the grunter being caught on the inshore reefs has been impressive.  Jigging soft vibes and soft plastics up to 5” will get you the good results.  Let’s just hope for good weather.

The mighty Burnett has been producing some cracker mangrove jacks.  Most of these fish have been caught on Lucky Craft Pointers and paddle tail soft plastics.  Most anglers are chasing these awesome fish towards the bottom of the tide.  There’s also been some monster flathead caught.  They seem to be getting the bigger fish towards the Town Reach around the bridges.  Jigging 20g and 14g Samaki Vibes is my favourite way to target the bigger lizards.  Don’t forget to throw in your crab pots because there’s some nice bucks starting to turn up.

The fish of the week in both the Kolan and the Baffle systems is definitely your mangrove jack.  They seem to be taking a liking to the smaller profile bait fish, so dropping down to 3” soft plastics is definitely a good idea.  With the smaller tides this weekend, working lightly-weighted prawn imitation plastics off the rock bars will get you some live action.  There’s also been talk of some nice sized fingermark caught up in the Kolan and Baffle, so while chasing the jacks you might get a nice surprise catch.

The red hot Lake Monduran fishing continues, with plenty of the barra caught measuring over 70cm. I’ve been getting most of my fish in the timber and in around 15ft of water.  With the water temperature  over 25 degrees the early morning bite has been in full swing.  Aggressively twitching Jackall Squirrels with long pauses has been getting the bite for me.  Remember to fish with confidence.  There’s plenty of barra to be caught in there.