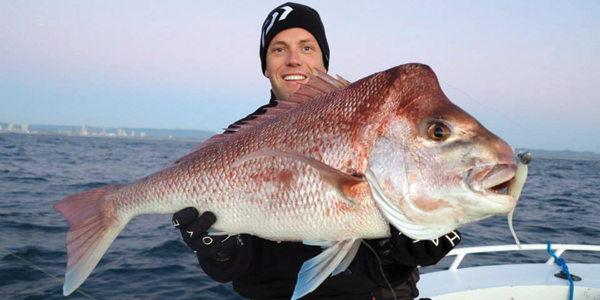 Brad keeps landing the big ones including this great knobby.

WINTER is here, with the temperatures plummeting of a morning and making it really hard to get out of bed. But for those who do, big rewards are on offer thanks to some great snapper being caught right along the coast.

With the current subsiding, the water temperature is finally starting to fall and the ever-reliable westerly and southwesterly wind is blowing softly in the morning, meaning conditions are absolutely perfect for snapper.

It has been killing me because my mini boat renovation had a little hiccup, with Aquaholic going in for some small modifications, which of course takes time. The seat pedestals have long been a pain for me because they take up space.

So prior to laying new carpet I decided to have the raised pedestal pads removed and replaced with either fibreglass seat boxes, stainless frames so I can get an Esky underneath, or even a combination of both. Either way, it’s kept me off the water, which is frustrating.

JB and Brad have been rubbing salt into the wound, with the boys continuing their hot streak of solid snapper. Float lining baits and soft plastics has seen the guys come up trumps and the fish have hit both. Some mackerel are still around as well. At this time of year they tend to be spanish mackerel and on the large side, with 25kg or better fish landed.

It always pays to have a heavier rig ready to go if you find yourself getting snipped off while fishing for snapper. If that’s the case, chances are the mackerel are to blame.

So with my boat out of the water I was lucky enough to be invited by some mates on a fishing trip offshore from Fraser Island for a couple of nights. It’s been a while since I’ve fished the area, with my most recent trip aboard a charter.

But I’ve never forgotten how privileged I’ve been in the past to have hitched  rides with Greg Lamprecht and Craig Tomkinson. I consider these guys two of the most knowledgeable blokes you could ever hope to meet, let alone get a ride with offshore from Fraser.

While Greg and Craig fish very differently, I was able to see how they are super-successful fishermen in their own right, so on this trip we used both anglers’ methods and came up trumps. If you’ve ever watched Greg’s Wicked Fishing videos you’ll see exactly how he fishes as he hides nothing from the camera.

We used his method of hitting small isolated bommies and achieved great success. So much so that on the very first spot we hit we were totally under-gunned because we were prepared to catch a heap of hussar to supplement our mullet bait and were using double paternoster rigs.

You guessed it! The spot was chockers with reds. True to form, when the first fish was lost they shut down. Lesson number one: always expect red action. While we got off to a good start, we never made that mistake again.

We managed a bit of a mixed bag the first day, consisting mainly of a couple of reds and parrot. The wind got up during the night, so we anchored and hit the sack. Only a shark or two was caught through the night and when we woke to a calm sea we were all very keen to get going.

As we drove from spot to spot it seemed like we picked up three new bommies every time we moved. We collected parrot through the morning but it was as the moon came up about midday that things really heated up.

First up a quality cobia, then a solid red was boated. As the sun got lower the fishing improved until finally as the sun was going down it was action stations, with baits being hit left, right and centre.

On our last drift before anchoring we boated a good red and pearlie, with yours truly hooking up to a noah. We decided to anchor on this little patch and on the first drop another red came aboard, then another.

But then the tax man moved in and we lost a big red before our baits began getting walloped every drop. The last shark was like the beast from Jaws; it was huge. We decided to call it a night about 1am.

The next morning was a carbon copy of the previous day, with perfect conditions. We planned to fish until about midday. Some quality fish were again landed including a decent cod and the biggest red of the trip. As we headed for the bar we were grinning from ear to ear.

It was a very successful trip and I can’t wait to give the area another hit. Back on the Gold Coast; good numbers of luderick, bream, flathead and trevally are being taken in the estuaries. In the late afternoon it’s been a fish a cast, which has made for great fun.

Some really good news is a couple of new boat ramps are going in along Currumbin Creek. Winders Park is getting a concrete ramp, which will be a welcome change from the sand ramp and a new ramp is being built at the end of Galleon Way on the corner of Currumbin Creek Rd.

These new ramps will make boat launching and retrieval a lot easier for everyone. Tweed Bar is getting shallow, with the big bank out the front catching the swell. Currumbin Creek Bar is shocking and I wouldn’t even try it on anything but the top of the tide. Tallebudgera Creek Bar has a small channel on the southern wall, while the Seaway is fairly good at the moment.

Smelly fingers to you all.

Heath has been fishing since the age of three and grew up fishing the mighty Georges and Hawkesbury rivers.
Previous Noosa River is Home to Some big Bream!
Next Sunshine Coast reefs and beaches fire