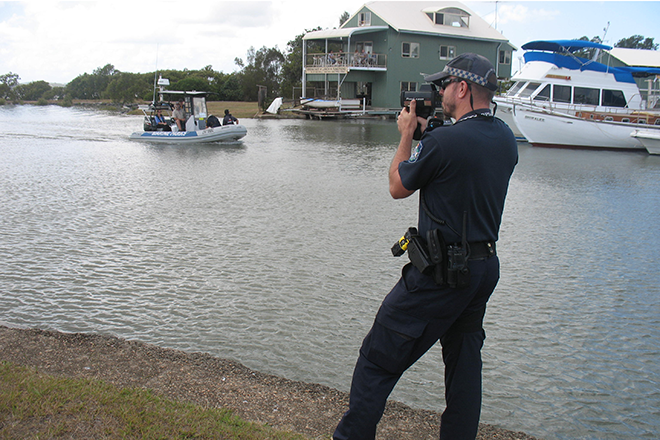 A NEW speed gun will enable Redland Bay Water Police to enforce the 6-knot speed limit in designated areas from Brisbane to the Gold Coast.

The Pro Laser handheld speed-detection device is intended to be used to combat speeding offences in response to a small percentage of boaties not doing the right thing in gazetted speed zones such as the Raby Bay canals, the waters between Cabbage Tree Point and Horizon Shores, Gold Coast waterways and canals and inland dams. During the boating high season, Redland Bay Water Police officers said they received an increased volume of calls in relation to boats speeding in gazetted zones and causing injury to persons and damage to other vessels, pontoons and even in some cases, shoreline damage.

This device is different from all other Pro Laser devices in the state because it is specially dual-calibrated to measure knots and kilometres per hour. According to one of the head technicians at the Police Radio Electronics Section, this may be the only speed gun of its type in Australia. Redland Bay Water Police will continue to police speeding offences in areas that have gazetted speed zones and in non-gazetted speed zones where the maximum speed limit on Queensland waters is 40 knots.

Senior constable Warren Goodyer said if you don’t want to incur fines for speeding, be aware of your surroundings at all times while on the water and obey the gazetted speed zones, which are clearly shown on signs in these areas.

Remember, the following restrictions apply throughout Queensland whether signs are present or not. A speed limit of six knots:

Even at slow speeds your boat will create a wash. Look behind at your wash and be aware of the impact this can have on other boats, people in the water or the shore. Travelling at the speed shown on a speed restriction sign does not guarantee you are not creating excessive wash. When navigating near, in or through a mooring area, drive slowly and keep wash to a minimum and keep a lookout for people in the water, small dinghies and trailing ropes.