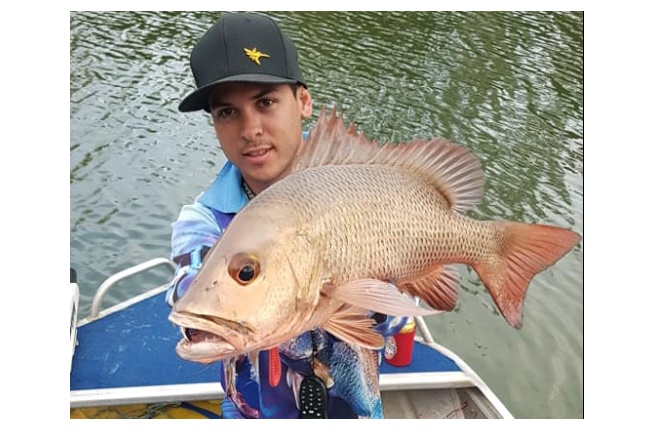 Ricky Wilson with the nice mangrove jack he caught recently.

Plenty of reports of mangrove jack near Bundaberg

The offshore forecast for the Bundaberg area could go either way this weekend, so keep an eye on it and check the latest updates before heading out.  The new moon was earlier this week and we are on the building moon so the fishing should be pretty hot out there.  Targeting red emperor and coral trout in the deeper water should be exciting.  Remember to target them on the tops and bottoms of the tides as there is very little run and these are the hottest bite times and the easiest time to fish.  The shallow edges of the reefs should be full of trout and red throat emperor as well so don’t forget your 5” Z-man Jerk Shadz.  They are deadly plastics to use out there!!

The inshore reefs should be firing this weekend!  The water is crystal clear so the mackerel should be chewing their heads off.  Throwing Flasha spoons and floating pilchards behind the boat is a deadly way to target them.  For the spanish, a floating gar behind the boat on a set of 7/0 gang hooks is an easy and effective way to catch them.  There’s still been good reports of stonker grunter being caught.  They are mostly being caught on prawns and Gulp soft plastics in the early mornings and late afternoons.

The Burnett is still fishing very well.  There’s been plenty of reports of mangrove jack, flathead, bream and whiting being caught. Most of the jacks are being caught on 4” Z-man Swimmerz rigged on 5/0 Headlockz jigheads.  Slow rolling these plastics over rocks bars is a very effective way to get the attention of the jacks and barra!  The flatties have been taking a liking to 3.5” Z-man Curly Tailz slowly jigged off the bottom with around 10lb fluorocarbon leader.  With the barra season now open, throwing 20g vibes in the deep holes on the tops and bottoms of the tides will be well worth a go!  Don’t forget to put Pro-Cure on your vibes to increase your chances.  The Mullet Super Gel is my favourite.

The Baffle and the Kolan are both still firing!  Plenty of jacks and cracker grunter have been caught!  They seem to be eating most aggressively on prawns so the Zerek Cherabin has been the stand out lure.  Slow-jumping these prawns out of snags and rock bars is as fun as it gets.  Most people are using 30lb fluoro carbon as leaders.  There’s also been plenty of flatties being caught.  The Samaki 10g vibe has been my favourite flatty lure up there lately.  The crabbing has also been awesome the past couple weeks.  Keeping fresh baits in your pots at all times surely increases your chances. With the midday high tides you won’t even have to get out of bed early to check your pots.

The Elliott has been fishing unreal for whiting!  The first of the incoming tide has been the hottest bite time. Fishing with fresh yabbies and beach worms will be again the standout way to catch them.  There’s also been good captures of flatties mostly being caught at low tide.  Walking the sand bars is by far the easiest way to fish the little gutters.  Not to forget about the jacks!  There’s been plenty caught with livies and smaller sized paddle tail soft plastics.  Don’t forget to chuck the crab pots in!  There’s plenty of chocolate crabs in the tight little creeks.

Lake Monduran is still firing on all cylinders!  Plenty of barra are still being caught!  The first light early in the mornings is still the standout bite time.  Twitching Jackall and Rapala lures out of timber and weed beds is an effective and exciting way to chase them.  Remember to put Pro-Cure gel on your lures – I find it gives you the extra edge and gives me confidence every time.