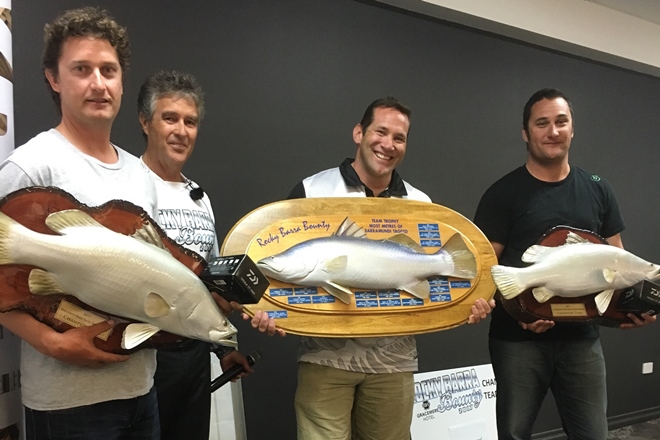 The winning team in the 2017 Rocky Barra Bounty was Brak Apparel, with brothers Jeff and Andrew Dyne winning for the first time and receiving their award from Gavin Pitts of Gracemere Hotel, the major sponsor of the Bounty.

DESPITE the flow in the Fitzroy River from recent rains that looked like placing a dampener on the event, this year’s Rocky Barra Bounty turned out to be a cracker and lived up to the initial forecasts.

Event committee member Bill Sawynok said, “This year’s Barra Bounty has broken more records than in any other year of the event. While 484 barramundi tagged and released was not a record, the 353 legal size fish was an all-time record as a percentage of the overall fish caught at 73 percent, easily topping the previous best figure of 56 percent in 2013. Add to that 15 trophy barra over a metre being double the number in the previous highest year and the largest fish measuring 1.33m, making it the second largest in the Bounty’s 19-year history.”

But the statistics get even better for threadfin salmon.

“The 197 king threadfin caught was the second highest on record after 2015, but the mind-blowing statistic for threadfin was there were 48 trophy fish over a metre in length, with the biggest being 1.31m,” Mr Sawynok said. “I am reasonably confident there has never been any competition in Australia that would have come close to that statistic for threadfin. Then to top that off, the average length for barramundi was 69cm and for king threadfin it was 84cm, both being well above the best for any other year. No wonder the feedback from competitors was that it was a cracker and the best Bounty ever, and they are looking forward to the 20th year of the Bounty in 2018.”

All in all, converting the statistics to weight, just over two tonnes of barra and 1.1 tonnes of threadfin were released back into the river so stocks can remain healthy. The Barra Bounty provides a unique snapshot of the fishery from the Fitzroy River to Corio Bay and it is also unique in providing a wealth of information about our fish stocks.

For those who enjoy graphs and statistics, there are some interesting perspectives on the event at the Crystal Bowl webpage at crystal-bowl.com.au/rocky-barra-bounty-live-monitoring