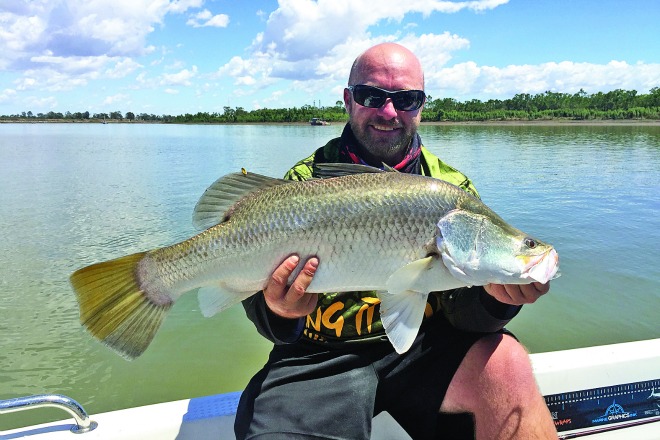 MY brother Chris and I have just returned from the Rocky Barra Bounty, which is held annually in Rockhampton.

We had an absolute ball up there, catching up with a few old mates and meeting new ones as well.

We represented TT Lures in the competition, which gave us an excellent opportunity to try out a couple of recently released products on the Fitzroy River barramundi. The Barra Bounty is a really well run competition, with a long list of anglers still queuing to get into the 70-team cut-off. It’s a two-person team event and is all catch, tag and release.

Every eligible fish is quickly tagged, photographed and put back in with the tagging information being phoned back to headquarters shortly after capture. The event runs for two and a half days, which gives you plenty of time to cover as much area as you want.

From here, the entire Fitzroy River is on offer, including the large expanse of rivers and creeks that makes up Port Alma and the Narrows.

This gives every team the opportunity to find their own little barramundi honey hole. A number of popular areas on the Fitzroy definitely see a lot of attention, but plenty of less-fished snaggy and rocky banks are worth a cast or two as you head out towards the mouth. During the couple of days we gave ourselves to pre-fish before the comp, we spent more time looking around than fishing.

Chris and I previously fished the barra bounty a few years back but had mainly stuck to the city reaches with mixed results. This year we put in plenty of hours using our sounders to find new ground up past Nerimbera boat ramp.

We only travelled up to the cut-through from here because further on the water resembled a chocolate milkshake.

Some of the country through that stretch looks amazing though, with rock pile after rock pile coming out of deep water.

We also sounded up deep rock bars that ran for several hundred metres, but we really struggled to get a bite. Plenty of snaggy mud banks needed more attention too, so we decided to start the comp in these reaches.

The briefing was on the Friday night this year, with a rest day on the Saturday and start time at 6am on the Sunday. The tides determined these specific times. Smaller tides seem to be most people’s preference in the area due to an increase in water clarity and the ability to fish some of the deeper edges without large amounts of tidal run. We stayed at the riverside caravan park in a cabin with my old mate and fellow BNB scribe Gary Churchward and his fishing buddy Phil.

The weather forecast for the competition was far from inviting, with 20-25-knot southeasterly wind looking at making things really tough. We did it tough on the first day of the Barra Bounty. The Fitzroy River is very different to the rivers we are used to. It seems to be a lot more like a river in far north Queensland or the Northern Territory than what we are used to in southeast Queensland.

The water is actually cleaner on a run-out tide than on a run in. This is most likely due to the enormous mud flats towards the mouth of the river, which bring the discolouration through as the tide pushes over them. Unfortunately we only got to see about half an hour of cleaner water on the first morning before a torrent of brown filth came roaring back in.

We worked a lot of the deeper back eddies with every lure in our boat before finally retreating back towards the city reaches for the afternoon with our tails between our legs. Chris put a couple of king threadfin in the boat to get us going but we stayed on the barra doughnut for day one.

Day two began very similarly to day one and we started in roughly the same area, hoping to catch an hour or two of the run-out tide and hopefully jag a barra. After two hours without a touch and just as the dirty water started to push back in from the mouth, we decided to pull the pin and head back up towards the city. We spent a lot of time sounding along likely looking edges and finally came across a good show of fish. A few casts among them showed them to be king salmon, but we definitely weren’t disappointed.

Over the next couple of hours we put a stack of tags into threadies from 45-85cm. There didn’t seem to be a lot of big fish among them but the numbers certainly kept us entertained. I think we racked up about 30 for the afternoon and I finally got us on the board with our first barra. Unfortunately, I think it was right up there with the smallest barra caught during the entire competition and measured in at 26cm.

We were a bit happier after day two and had a plan for the third day, even if it meant sifting through a heap of king salmon to find a barra. Day three started with another nice morning and we were happy to get stuck into a few fish early. A couple of threadies kicked the day off and then a little barra joined the deck.

By this stage we had both settled on one type of lure: a 3” Z-Man MinnowZ in Opening Night rigged on a TT HeadlockZ 3/8oz 3/0 jig head. Out of all the sizes, shapes and colours we packed to chase barra, we went back to the same plastic and jig head I throw around in my local river. We ended up racking up a heap of fish on the last day, which ended at lunchtime.

We found a stack of little barra on one rock bar that would bite for a very short period. Each time we went back there we would get a barra on the first cast and then have to give them a 10-minute break. It wasn’t all bad though because the threadies were good value to fill in time.

Right towards the end of the comp we decided to give the barra bar one more cast and Chris hooked a decent one. I can tell you it was great to see a solid chromy slip into the net after a spirited fight. It went 72cm and was the biggest barra we landed for the trip. Thanks to the last day we ended up landing 10 barra, 53 king threadfin, one blue threadfin and a couple of stinky goldspot cod.

The number of king threadfin caught during the comp this year was amazing. We landed a lot of small fish in the 40-50cm range as well, which shows just how well the fish have recruited over the past year or two. It was actually a bit strange to be catching threadies at this size because I can’t recall ever catching one under 60cm other than in a cast net in southeast Queensland.

I spoke to Bill Sawynok from Suntag about king threadfin salmon movements before typing this article and he was definitely excited about the numbers of juvenile fish caught this year during the Barra Bounty. Bill has extensive tagging data on king salmon, which shows a vast majority of the species likes to stay in the same area, especially in the Fitzroy River. Bill and his loyal team that organises the Barra Bounty have been pushing to remove commercial netting from the river for many years now.

Thanks to all their hard work, from November 1 the Fitzroy River will be a net-free zone, which will allow this awesome river to repopulate itself and rise to its full potential. The presentation night for the 2015 Barra Bounty was held at the Frenchville Sports Club and was an absolute cracker, with plenty of prizes and beers had by everyone. Congratulations to the winners of all divisions.

We can’t wait to get back there next year to chase a few salty barra in a net-free river.