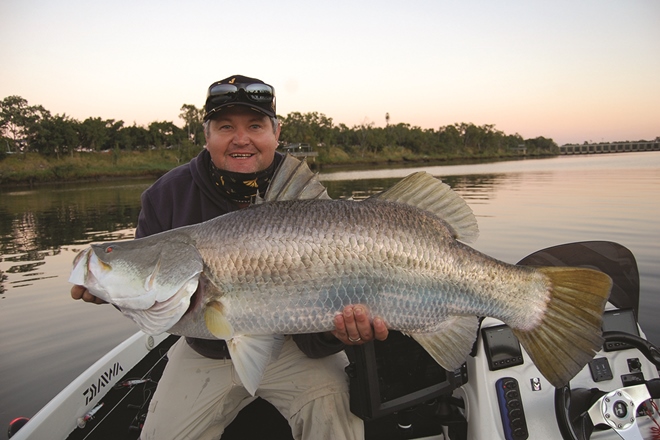 Ben Dirken with a 104cm barra.

WHO says winter is a bad time to go fishing?

When we were planning the Barra Nation Series late last year we decided to take a chance and run an event in the saltwater reaches of the Fitzroy River during winter, and boy did it pay off. The Abu Garcia Rockhampton Rumble was the second round of the Sunline and Lucky Craft Barra Nation Series, and it was a tightly contested tournament, with 22 highly qualified teams taking to the water.

Over the two days, anglers managed to weigh in more than 230 barra to prove barra fishing can be as epic in winter as any other time of year. Take into account the undersized fish thrown back and the huge number of threadfin salmon hooked as by-catch and the anglers definitely captured an amazing number of fish.

Remember this statement: Rockhampton will become the barra fishing capital of the world within 10 years.

Yes, this is a massive statement, but the government has seen to the removal of professional nets from the system, and talking to the local anglers, we expect the barra populations to explode over the next few years.

The pair said they focused on snags and structure and it really paid off, winning more than $3500 in cash and prizes and beating some of the very best barra anglers in the country. The go-to setup for Team Rocky Refrigeration consisted of a Dobyns Champion rod matched with a 3000 Shimano Stella, 20lb Sufix braid and 30lb Sunline fluorocarbon.

In second place was another young-gun team, JML Anglers Alliance. CJ Aaran and Charlie Hohn finished very close behind the front-runners after focusing close to town and fishing between the bridges for the majority of the tournament. The standout lure for CJ and Charlie was the GoodVibe Kicker 95mm in yellow. Fished very tight to the ultra-rocky bottom, the guys hopped these lures up and down as they retrieved.

They also covered the lures in Pro-Cure Garlic Plus Super Gel scent to mask any unwanted smells and increase their strike rate. Their chosen combo consisted of a Samaki ZRT 6-12lb rod and Daiwa Certate 2500 spooled with 15lb Sufix braid and Sunline 60lb FC leader.

Rounding out the top three was the very consistent and experienced Team Humminbird/EJ Todd consisting of Craig Griffiths and Karim De Ridder. Craig and Karim have pretty much done it all in the Australian barra fishing tournament scene and seemed very happy that a new breed of anglers has stepped up to take on the tournaments. Their go-to lure was a Lucky Craft Pointer in 78mm with upgraded hooks to Owner 14s.

The Big Barra came in the first session of the event, with Team Salty Tackle claiming the big fish and taking home the Big Yella Time Lures pack valued at over $250. Four barra surpassed the magic metre mark during the event, with Team BTD Lures bagging a 104cm fish and Team JML Anglers Alliance managing a 103cm barra.

With next season’s calendar already being put together, we really can’t wait to head back to Rockhampton in 2017 and see how it has improved. Keep an eye out for the announcement of dates on the B.A.S.S. Australia Nation website bassaustralia.com.au

@@BASSAustralia
Previous How to make lures from stainless butter knives
Next Gearing up for Cleveland Caravan, Camping, Boating & 4×4 Expo