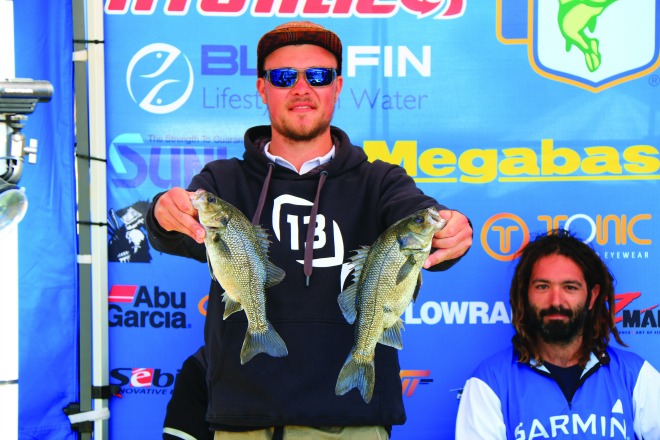 WE knew the last round of the Atomic B.A.S.S. Australia Nation Series 3 was going to be one of the best tournaments for some time, but as it turned out, the Sunline St Clair Classic was a lot closer and more exciting than we ever could have expected.

With five Pro anglers still in the hunt for the coveted Samurai Rods Angler of the Year title and seven Co-Anglers chasing the Co-Angler title, which included a representative trip to the B.A.S.S. Nation Championship in the US next season, there was a lot of tension and expectation leading up to the tournament.

A couple of anglers were still in the hunt for the Rookie of the Year title too, and with only two years in which to achieve this status, they were giving their all to take out the title.

The AOY title is classed as lucrative and as difficult to win as anything else in the tournament arena.

Basically it’s a compilation of the entire season and only the anglers who finish consistently towards the top of the leader board at each event have a chance of claiming the title.

The angler who achieves the title can clearly claim that he or she is the best angler in Australia (at least for that season!).

As well as the anglers pursuing the AOY titles, the last round of the season also brings another 80-plus hungry competitors chasing cash and prizes valued at over $15,000 as well as the last chance to secure qualifying spots in the all-important Atomic B.A.S.S. Australia Nation Championship, which is the defining event for any Pro angler looking to have a shot at glory in the homeland of tournament fishing: the US.

Anglers qualify for the Championship by finishing first or second in any tournament, and the rest of the field is made up of the top anglers from the Samurai Angler of the Year points table.

Just to qualify is a feat in itself, as this season 127 anglers will miss out on being in the top 32 group in the Australian Championship.

Under incredible pressure, Dean Silvester from Brisbane claimed the Samurai Rods Angler of the Year title by a single point from Terry Allwood of the South Burnett region, and only another point back was Mitchell Cone from Tamworth, NSW.

With great relief, Dean managed to hold onto his slight lead to claim victory. He seemed almost shocked he had won and mentioned on stage that at one point he thought the series may have slipped from his fingers.

The Rookie of the Year title was taken by Terry Allwood in his second season as a Pro angler, and he is becoming the Mr Consistent of the tournament trail. Terry did his apprenticeship travelling as a Co-Angler and has stepped up to really make an impact on the tournament scene.

These new anglers are driving the sport to a new level of competition and at every tournament we see them become more professional and with a larger repertoire of techniques.

In the Co-Angler ranks, Dylan Fryer managed to lead the AOY race from the very first tournament and won by a mere four points over James Buchner.


Dylan is now the fourth angler to join the Australian team and will head to the US in 2017 to compete on the global stage in the B.A.S.S. Nation Championship. This is set to be the trip of a lifetime and Dylan has the opportunity to pursue his passion and fishing career more intensely after this win.

Alan McNamara goes back to back

With all this Angler of the Year title action going on, it was hard to focus on the actual tournament, and one angler managed to have a repeat win on Lake St Clair.

Alan McNamara won the exact tournament last year in a wire-to-wire win (leading from start to finish). This year he didn’t lead the tournament until session two but still took out the title using a topwater-focused method around the base of trees. Alan has proven to be a real contender come Championship time and over the years has accredited himself with multiple species wins.

He is far more than just an everyday angler and will be hard to beat in the first week of September. He used a Millerods Control Freak Bass Vibe 2-5kg rod for his topwater presentations and a Millerods Control Freak BassLC for his plastic presentations. Alan is supported by Shimano and uses the Sustain and Stradic models for his bass fishing, spooled with Shimano Power Pro main line and Ocea Leader. His topwater reel was spooled with 5lb main line and 10lb leader, while his finesse plastic presentation used 3lb main line and 6lb leader.

Placing second at the event was Terry Allwood, who focused on a single area, fishing deeper as the sun rose throughout the day. He worked the weed patches close to the edge when light was low and then moved out wider in the same area as the light increased. This proved to be very successful, with Terry producing consistent bags through the entire tournament using an Atomic Plazos Paddle Tail 2.5” soft plastic in Avocado colour matched to a 1/4oz Atomic Seekerz jig head.

He used a Samurai 181 rod matched to a Daiwa Certate spin reel spooled with 10lb Unitika Light Jigging main line and 6lb leader for the finesse presentation. Terry found the rod had enough lift to drag the bass away from the structure and weed beds.

Rounding out the top three was Dean Silvester, who focused on broken weed edges using a combination of Keitech Easy Shiners and Jackall Squirrels.

In the Co-Angler division, tournament winner Patrick Bailey from Toowoomba started competing in the B.A.S.S. Australia Nation Series this season and has gone from strength to strength.

A new breed of angler is hitting the stage. They are extremely passionate about the tournaments and have already honed a high level of skill. Patrick is right towards the top of that pack.

The next era of fishing has arrived and it’s exciting to see these anglers taking away titles and competing at a very high level. Patrick focused on the weed edges with a 1/6oz Bassman jig head matched to a Z-Man 2.5” Slim SwimZ in Baby Bass. He worked the plastic with a Samurai Infinite rod matched to a Shimano Stradic 1000 reel spooled with Unitika 8lb braid and 8lb Gamma leader.

Second-placed Co-Angler Ben Faro from Victoria used the weedless technique he has perfected over the years to really challenge Patrick. Ben’s setup for weedless pitching involves a fully customised 7’ rod made by ROC Custom Rods that he matches to a Daiwa Certate 200 spin reel spooled with Sunline Castaway braid and Shimano Ocea 8lb leader.

Rounding out the top three in the Co-Angler division was dedicated angler Peter Holmes, who led into the final session but unfortunately couldn’t fill his limit on the final day.

His go-to lure was the ever-reliable Slider Grub in Watermelon Seed colour that was cut down and matched to his Barrabass rod with Shimano Stradic reel spooled with 8lb Power Pro and 6lb Unitika leader.

With such a large increase in participation this year and some amazing prizes on offer, the tournaments are really on the up. If you are interested in seeing more on any of the tournament series including Kayak, Teams, Barra or Pro-Ams, visit www.bassaustralia.com.au