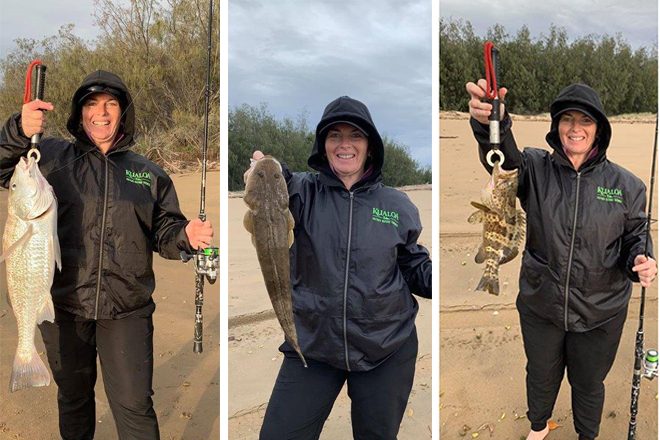 Emma Jane with a nice grunter, flathead and cod she caught recently.

Snapper should be in awesome numbers off Bundy

The forecast for this weekend for the Bundaberg area is definitely on edge.  It looks like the wind may be dropping later in the weekend so make sure you keep an eye on that. With the VMR Bundaberg Family Fishing Classic on this weekend there will definitely be some people trying to sneak out the front.  If we are lucky enough to get out I think the snapper should be in awesome numbers!  I’d be throwing 20g Samaki vibes and 5” ZMan soft plastics for them.  The best snapper bite is usually on first light and last light.  You should also get some cracker grunter as a bycatch too.

The blue salmon are again the standout catch for the Burnett River this week, with blueys up to 95cm being caught.  Hopping blades and soft vibes off the bottom is definitely the technique to use while chasing these awesome fish.  There has also been some cracking bream caught around the town reaches.  Working lightly weighted Zman Grubz and using small prawns as bait are the methods that have been getting most of the captures.  If you end up towards the mouth don’t forget to fast burn some Flasha spoons because there’s still plenty of schoolie mackerel around.

Both the Kolan and the Baffle systems are producing some cracker flathead and queenfish.  Most of the flatties have been caught on small Zman soft plastics worked over shallow sand bars towards the bottom of the outgoing tide.  The queenfish are still smacking surface lures.  Nervous bait fish flickering around the surface is the thing to look for while chasing queenfish.  Fishing the new moon afternoon incoming tides for whiting will also be well worth it.  Pumping fresh yabbies for them is the way to go.

The Elliott has also been fishing really well for flathead.  Working small Gulp soft plastics off the bottom has been the standout technique.  Fishing the outgoing tide is definitely the time to chase them.  People are  also having plenty of luck throwing small poppers over the shallow sandbars for whiting.  It’s great fun down there fishing for them in crystal clear water.  Don’t forget to throw the crab pots in as there has still been some chocolate bucks getting around.

Lake Monduran is still producing the goods.  The barra surely are getting bigger.  We are super excited for what this summer will bring!  Using Jackall Squirrels over the shallower edges has been the way to get them to chew.  I wouldn’t be rushing there early in the mornings, I’d be starting at midday and fishing till last light.