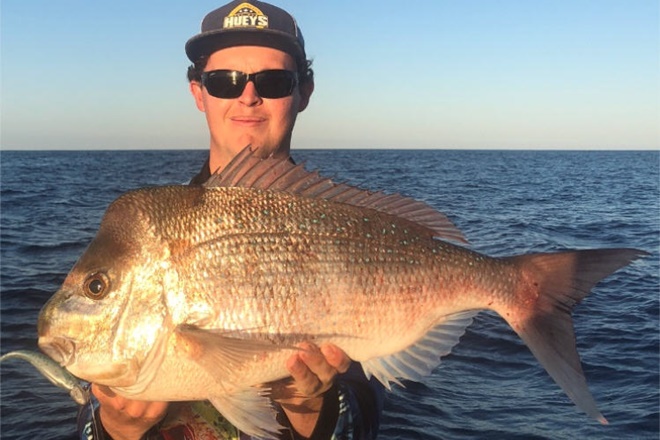 Mitch Beyer with the nice snapper he caught recently using a soft plastic.

Unfortunately, the offshore forecast is very unstable at this point in time.  It will be a matter of checking the updated forecast and then call it on Friday afternoon.  With the small tides this weekend the deep should be firing.  The numbers of cobia, reds, snapper and trout have been unreal.  The standout baits have been pilchards for trout and snapper, and mullet fillets or frames for reds and cobia.  Remember, use the lightest sinker possible to keep your bait looking and feeling as natural as possible.

With the unstable wind forecast for the weekend the inshore reefs will be the go.  There’s been really good numbers of snapper and grunter being caught on the early morning and late afternoon bite.  Using light-weighted soft plastics has been the stand out tactic on chasing them.  There’s also been reports of schools of jewfish turning up.  The standout reefs have been the Cochrane Artificial and the Bargara Two Mile.  Also don’t forget about floating a live bait out the back.  There’s still a few odd Spanish mackerel around.

The Burnett is still fishing very well.  The flathead and grunter have been the stand out catches.  Most of these fish have been caught on 20gr soft vibes and 5 inch soft plastics along the gravel beds and sand bars.  The bream have also been in good numbers.  The major rock bars and in tight along the jetties have been the hot spots.  The blue salmon are still in awesome numbers in the Town Reach.  Soft and hard vibes are always the standout lures to chase them.  If you’re lucky enough you could even snag a jew as bycatch.

The Elliot has been fishing awesome with plenty of whiting, bream and flathead being caught over the past week.  The standout bait has been fresh yabbies rigged on a long shank hook with a lightly-weighted sinker.  There’s also been a couple catches of early season mangrove jack down there.  Slow retrieving 5 inch paddle tails is a deadly way to target them.  With such clear water down there at the moment it would be smart to drop your leader down to 25lb to get the bite.

The Baffle and the Kolan are still firing.  With plenty of bait in the systems there’s plenty of small pelagics chopping at the surface.  Using small poppers early in the morning and late in the day is always effective.  Also, fast-retrieving small soft plastics and slugs high in the water column with small pauses is a fun way to chase them.  Small queenfish, GT’s and tailor are the most likely catches.

We are still hearing good reports from Lake Monduran!  With barra over 80cm still being caught in this cool weather, its looking like we are going to have the dam firing once conditions start warming up!  The barra have still been falling for the Jackall Squirrels and 20g soft vibes.  The hottest bite has been late in the arvos just before last light.

For more grunter and snapper tips around Bundaberg, click here!