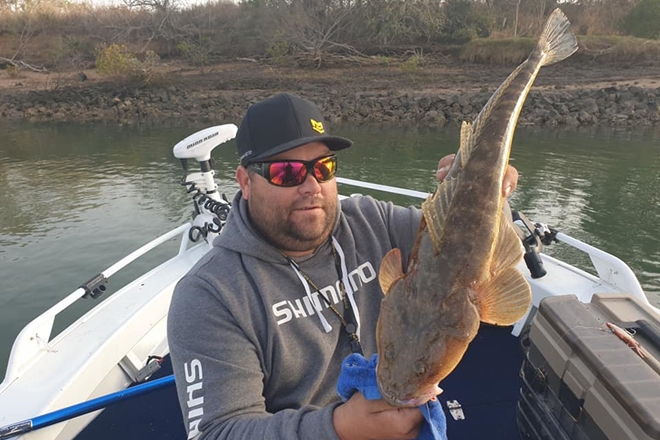 Adam Turner and the cracker flathead he caught in the Burnett River recently.

South-easterlies looking to lighten up near Bundaberg

With the forecast for the Bundaberg area looking forward into the weekend, it seems like those stronger south-easters are going to lighten up and swing around to the north for those guys looking to get out and fish the offshore reefs.  If you stocked up at last weekend’s Garage Sale, now is the time to put it to use, don’t forget the bait and ice.  Northerly winds are sometimes a bit harder to fish, so keep on moving around your spots to find those willing fish that want to feed and your catch rate should improve.  Remember to always have that floater out the back for any Spanish mackerel cruising through the area.  As always, make sure you check the latest weather report before heading out as it can change in a heartbeat.

Fishing inshore reefs can be a little harder due to the areas being shallower, and they are usually best fished in low light periods.  As bait moves in over the inshore reefs such as the Cochrane Artificial Reef and the Two-Mile Reef at Bargara, the bigger predators move in as well to feed.  These include species such as snapper and grunter.  To catch these fish use bigger baits like pilchards or whole squid.  If you are wanting to catch these fish on a lure, try casting out a Samaki Vibe or 5” soft plastic on 20lb braid and 40lb leader.  While heading out to the close inshore spots, try trolling one of the many mackerel lures on the market.  It’s a good way to cover ground searching for new areas to fish, and to maybe pick up a fish or two on the way out.

For anyone looking to have a go at catching a blue salmon there are still a few in the Burnett around the Town Reach or Fairymead Hole.  Try casting soft vibes like the 20gr Samaki or 20gr Jackall Tranzams – these are the gun lures.  Perseverance always pays off.

Big flathead are also on the chew with reports of up to 90cm big girls being caught.  Flathead aren’t scared of big baits, so if you’re bait fishing put on a big pilchard and drift through the deeper holes.  If lure fishing put on a 7” soft plastic and do the same, hopping it off the bottom until that big one jumps on (hopefully).

There are reports of good whiting coming out of all river systems with up to twenty to thirty good sized summer whiting being caught.  Pumping fresh yabbies at low tide and then fishing the area as the tide moves in over the sand flats has been the best option.

As the Kolan and Baffle systems warm up they are prime rivers for the mighty mangrove jack and barramundi.  When chasing these species in rivers look for snags, rock bars and areas that are good to ambush bait fish as they move through the system.  Casting imitation prawn lures, 4” paddletail soft plastics or suspending hard bodies should produce the goods.  If bait fishing, try pilchards, mullet or live sprat – this should get you a feed.

Putting in the time on this dam is a must if you want to continually catch fish as water level drops and winds change.  Having the winds blow in the one direction for a period of time moves the warmer water in certain areas where the barra feel more comfortable to feed and grow to that trophy-sized fish.  Jackall Squirrels have been the gun lures at Lake Monduran for a few years now as they suspend really well beside the snags.  A lot of fish in that 60cm to 80cm mark have been caught on this lure.  As fish get bigger, upgrades on lures, hooks and lines will be needed in future years.