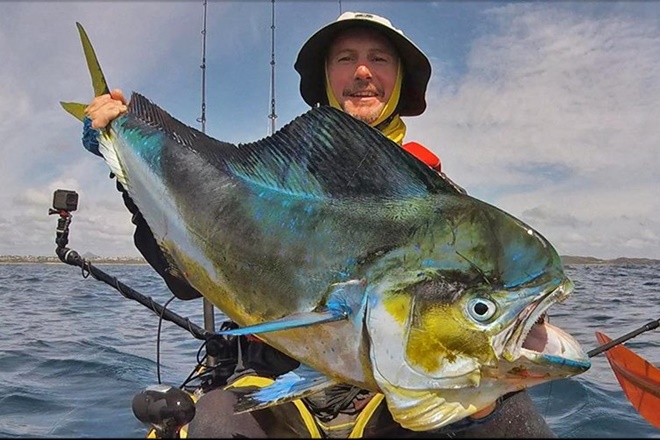 Jason Milne, Viking Kayaks: I found this beauty out off Sunshine Reef on Thursday. I was trolling a pilchard on a squid skirted rig when it hit. Super aerial displays! My first ever dolly! Water temps were 25 degrees. Got it around the 32m mark. Photo: fishingnoosa.com.au

With gale force southeasterly winds persisting mid-week and a big jump in swell, the offshore scene has been temporarily put on hold. We did have a few narrow windows earlier in the week where those who got offshore around Sunshine wide found the spotty mackerel. These fish were sitting mainly just below the surface feeding on bait and given away by birds overhead. To target these fish having a mix of slugs in the 20-40 gram size has been claiming the majority of fish. If getting bitten off then use a short length of single strand wire finished off with a haywire twist.

Sunshine reef has also been producing coral trout, pearlies, maori cod, spanish mackerel, mac tuna and cobia. Most of these fish are taking pilchard baits and floated pilchards. Lighter paternoster rigs with 4/0-5/0 hooks also working well especially with braid around 30lb. Further out around North reef we have seen the pelagic’s also feature with spanish, cobia, tuna and mahi mahi getting caught.  Again like fishing in close, when wide be sure to have a lightly weighted pilchard floater out. If on the move between spots then troll a pusher style lure or deep diving lure like a laser pro as you will often find mackerel and mahi mahi otherwise missed.

In the rivers the recent rains has pushed the bait and prawns into the lower estuary so expect to see prawn pattern soft plastics working very well. Gladiator prawns and Squidgy pro prawns will be the undoing of many quality flathead around the dog beach and river mouth area especially along the jet ski side of the Noosa River. If after trevally then grub style plastics in the 2-3” size and 8lb leaders will be working in conjunction with Zman motor oil colour which is a standout for dirtier conditions.

For those headed up after smaller jewfish then larger paddle tail and grub tail plastics will work very well with 12lb lines and leaders. Jewfish have a very long sensitive lateral line so vibration is key. Look at Zman streakz curly tail again in motor oil and Chasebaits paddle tail in apple juice and pearl; prawn colours.

For those after mangrove jacks then dark 80mm poppers like Lucky Craft G-Splash in MS Black colour worked deep into cover and along the snags between the lakes are working well. If you haven’t tried the Chasebaits flick prawn then these are very effective especially at night during run out tides. Of course live bait work very well too so use Mustad penetrators and 25-30lb leaders.

Freshwater has been firing and Lake Mac has been producing quality bass into the mid 40 cm mark. These fish taking surface lures like Lucky Craft Sammy 65 worked out from the lilies and paused for the strike. As the sun comes up then moving into deeper waters and using vibes and blades with a slow retrieve has been getting some great fish too. Take a look at the Jackson tail spinners next time you are in and hitting the fresh.