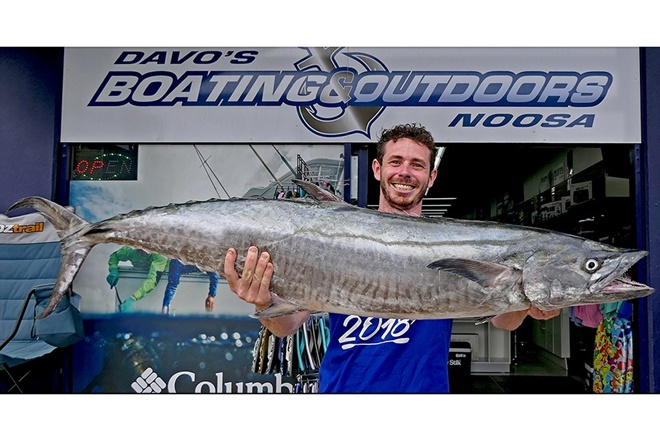 Scott Davis was 40 minutes into his paddle troll (there were lots of birds and small longtails working the surface) when his rig was hit by this thumper 18kg spaniard. Photo: fishingnoosa.com.au

Finally we have had a good run of weather which has seen everyone get offshore and stuck into some fantastic fishing, with spanish mackerel mania on the cards. In close the bait balls have been huge closely followed by tuna, cobia and mackerel. With baits and lures not even reaching the bottom the general size of cobia have been around 1 meter with mackerel around 5-25kg. These fish are on the closer reefs of Sunshine, Jew Shoal, Halls and down the coast in the 15-25m mark. If you find bait look for long lines on your sounder as this indicates mackerel and cobia. For bait fisherman then, pilchard and slimy mackerel floaters are key with a bit of weight. Paternoster rigs have also been getting smashed so heavier gear is important as double hook-ups are possible and sharks are never too far away.

North reef has been worth a look with spanish mackerel patrolling the mid water and down deep the reef species including sea perch, pearl perch, snapper, cobia, various cod species and long tail tuna in the mix.

Sunshine reef has been holding quality fish including coral trout, sweetlip, pearl perch and snapper. Large slab baits and well as live baits and soft plastics have been successful. Take a look at Berkley gulp 7 inch jerk shads in pearl white and nuclear chicken with a 4-6/0 hook and ¾-1oz jighead.   Coral trout love to hit large baits and won’t hesitate in smashing a live bait that swims too close, so don’t be afraid to upsize bait presentations.

Early mornings Jew shoal has been firing with mackerel and cobia along with smaller reef species. This is a great spot to start the day before heading out wide. If up early be sure to follow the birds as they will show you where the fish are. Casting slugs with a small length of 44lb single strand wire just above the eye will help prevent bite offs so be sure to ask us how to tie a haywire twist.

The river has been fishing well with large trevally, bream, whiting and flathead being a common catch. Woods bay has been a popular destination for anglers with early morning and late afternoon producing quality fish including tailor, gt, cale cale trevally and queenfish. Lures have been the hot shot for anglers fishing the bay with surface walkers such as the atomic k9 bulldog and the new Bassday backfire poppers proving their worth.

For anglers fishing the sandflats of the frying pan, Goat Island, Noosa dog beach and Gympie Terrace there have been some elbow slapper whiting being caught on live yabbies and beach worms. Popular rigs for these fish include the running sinker rig using a 6lb leader, a size 2-3 ball sinker and #4 worm hook. Flathead have been abundant with best fish being caught slowly drifting pilchards and other soft baits along drop offs and sand bars. With the warm water, mangrove jacks have been very active with anglers having positive results on both lures and bait. The best results have been seen after dark with jacks up to 60 cm smashing live baits in deep water holes and rock bars. These fish are quick and extremely aggressive and require heavier gear if you want to stop one. Rigs consisting of fluorocarbon leader around 40 lb and 30lb braid certainly helps toward landing one of these beautiful looking fish. Lures of choice have been deep diving hardbodies such as the lucky craft pointers in 78 and 110 mm models. The key to catching these fish on lures is to match what they are eating. Observe what bait surrounds jack spots and do your best to match that, whether it be prawns, mullet or herring.

Along the beaches anglers have had success on quality whiting as well as dart, bream, whiting and a few flathead being caught from deep gutters along the North Shore and south toward Castaways beach . Baits such as beach worms, prawns and pilchards have been the winners, providing anglers with quality numbers and sizes. Tailor are still about with fish reaching 55cm at the maximum size especially after dark.

In the fresh. Warm water has fired up the Saratoga in both Lake MacDonald and Lake Borumba with fish up to 80 cm being boated. As these fish feed during low light periods, a session on sunrise or sunset will find anglers the best results. Lures have been the main pick for anglers with walk-the-dog style lures including the Cultiva Zip’N’Ziggy and Bassday Sugapen 75 landing quality fish. Chasing bass anglers have been fishing deeper schools with blades and heavy weighted soft plastics landing quality fish up to 50 cm.