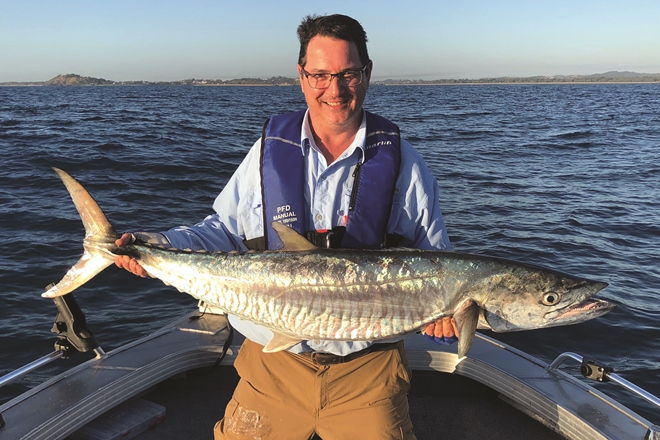 Marius with an estimated 20kg spanish mackerel caught on a floating ribbonfish.

Spanish mackerel in the morning

HI all, after a few weeks of cooler weather by our standards the estuary fishing has been hit and miss.

We’ve seen great catches of good size whiting in most creeks one day but can’t find them the next. It has been the same story for blue salmon and most estuary fish. This is fairly common for this time of year as the estuary waters begin to clear during the dry winter season.

The clearer water will see the fish being very skittish, especially in the shallows, so being quiet when setting up and getting your baits as far from the boat as you can are good tactics. This can help with getting a bite from the larger, wiser and more timid fish that often skirt the outer edges of a school.

The fishing offshore has been pretty hot, with multiple tuna and mackerel species busting bait balls all along the coastline. Among these scenes it has not been too hard to find drag-screaming action. The recently held Mackay Spanish Mackerel Shootout drew over 110 senior and junior anglers to try their hand at catching one of these awesome creatures.

Throughout the duration of the comp, over 25 mackerel where caught and weighed. The winner of the junior section also got the biggest for the comp with a 19.54kg fish, pipping a senior angler by 0.24kg. This event is always a great success and marked early in the calendar for many local fishos.

I have never competed but with the weather looking good that weekend, we thought we should get into the spirit and go chase a spanish mackerel in the morning ourselves outside of the official competition. On this morning the high tide was about 45 minutes after sunrise, setting up the perfect conditions for stirring some interest. We launched at about 5.30am, giving plenty of time to get out to the chosen fishing location before first light.

After a good 10 minutes of looking around with the sounder, we found where the bait was sitting and hit spot lock on the electric. With the baits already rigged prior to leaving the ramp, we were ready to go with a good 10 minutes up our sleeves before daylight.

On one line we had perfect ribbonfish about 50cm long floating 2m under a balloon sitting nicely out the back in the current and on the other line a garfish drifting and rigged with a set of ganged hooks. It was about 15 minutes after sunrise and just as I commented on the light being the perfect bronze colour for a fish, it happened!

The balloon launched sideways across the top of the water before popping and the line started ripping through the water as the fish smashed the ribbonfish. It is always a tense 10-15 seconds after a spanish strike, or at least until you set those hooks and get a positive hook-up. Setting of the hooks is usually followed by a blistering first run and this fish was no different, peeling 100m of line like it was nothing.

After another three or four incredible runs and 15 minutes the fish turned and we got our first look at it. In the early morning light, seeing a monster spanish mackerel come alongside the boat is an awesome sight and a special experience for the angler.

After bringing the fish on board and getting all the happy snaps and high fives, I promptly re-rigged the line with another ribbonfish and floated it away from the boat. By now it was just before the turn of the tide, another prime time for a bite. The balloon didn’t even get all the way out before it was taken and I struggled to get the rod out of the holder with the fish tearing line off. As I got it out, the fish dropped the bait.

Quickly free spooling the reel, I let whatever was left of the bait fall through the water column. A few seconds later, the fish took it again and began screaming off. As I loaded the rod up to set the hooks, they pulled and the fish was gone.

After the disappointment of missing the second fish and with the sun getting high in the sky, the breeze starting to pick up and with a good fish on the deck, it was time to head the 2km back to the ramp. The fish we caught was never weighed or measured but we made a conservative estimate of 20kg-plus – a fantastic spanish mackerel in the morning!

Maybe next year we should have a go at fishing the comp.