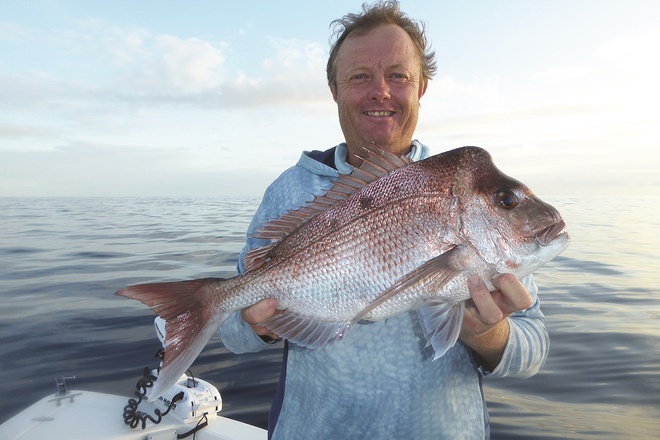 Tony made the most of his holidays by coming down and catching good snapper.

HI everyone, at the time of writing we still haven’t had any decent rainfall here on the Gold Coast.

I hope by the time you’re reading this we have had heaps. The dry conditions are really starting to make fishing a bit difficult. The best fishing since Christmas has been for marlin offshore and mangrove jack inshore. You can target plenty of other species, you’ll just need to fish a bit smarter to end up with a good catch. We mostly fish for a feed, as nothing is better than a feed of whiting or snapper, but sportfishing for species like trevally and tarpon is great fun.

Sportfishing can mean different things to different fishos, and for me it just means fishing with lures and releasing the fish after capture and a photo. Most of the species we target this way are not the best eating quality but are great fun to catch, so releasing them to hook again another day is fine by me.

On the Goldy we are lucky to have plenty of these species as well as even less well-known fish such as giant herring and milkfish. Targeting these fish is not that difficult or expensive. A 3-5kg or 4-6kg rod, depending on the size of the fish you’re chasing, with 8-12lb braid and 12-20lb leader will get it done. I prefer lighter gear because it means a longer fight and more fun.

Targeting each sportfishing species will require slightly different fishing times. For GTs, fish early mornings and late afternoons along the rock walls and around the bridges in both the Nerang and Coomera rivers. Bigeye trevally are mainly night-time predators, so after dark on the run-out tide is best, especially around any structure that has lights on it. Bridges and jetties are the most popular places to try.

Trolling the rock-lined canal walls at Runaway Bay and Sovereign Island is a great idea too. Lure choice can be anything from small shallow-diving lures such as Rapala X-Rap 8s to surface lures including the Atomic ‘Bulldog’.

Of all the sporty species, tarpon are my favourite. They are aggressive, fast and very acrobatic once hooked. They are great fun. Unfortunately, they can also be the hardest to find. Again, the lights around any of the bridges on the Gold Coast are worth trying. We find the odd school very early in the morning feeding on the surface in the northern part of the Broadwater but they can be very hit and miss.

Small 3” grub soft plastics in white have been our best lure for them on a 1/8oz, 1/0 jig head. Once hooked, be prepared for several spectacular leaps as they try to throw the hook. If you do find tarpon, a 20lb tippet on the end of your 12lb leader is recommended because they have a very rough mouth that will wear through your line.

Now we’ve had our fun, we had better get back to fishing for a feed. Whiting fishing has been steady without being great. Like everything else, a good few inches of rain would improve the fishing. It’s getting to the end of their spawning season and some fish are heading back upstream, so fishing the area around Hickeys Corner should get you a feed of whiting. While I still prefer to fish Isle of Capri and the Council Chambers area this month, the one thing that doesn’t change is bait, with bloodworms catching way more fish than anything else.

I know yabbies and beach worms will get a few fish but if the fishing is tough, bloodworms can be the difference between a few fish and a great haul. So far it has been a very slow start to the spotted mackerel season but there is still plenty of time for them to turn up, with good catches during March in previous years. The southeasterly wind we had last month is just what we need to increase the water temperature and bring the bait in closer to attract the mackerel.

Pieces of pillie on a 4/0 hook with a short length of 27lb wire present the preferred capture method, using either a very small sinker or even better, no sinker at all. Spanish mackerel numbers should also increase this month, and trolling lures and slow trolling live baits is the way to capture these speedsters. Trolling in about 40m of water from Diamond Reef north, watch for current lines and bait on your sounder to help your capture rate.

Bottom fishing for snapper, trag, sweetlip and cod has been good when conditions allow us to get out and should be even better this month.

Despite the lack of rain, mud crab captures have been better than expected and will improve even further if it ever rains down this way. The Coomera River and the northern Broadwater right up to the Never Fail Islands have been the best areas to try. Sand crabs have been widespread, and we have even been getting them at the Council Chambers on our lines while whiting fishing, so the mouth of the Nerang River would be a good spot to try.

Other options this month include fishing for flathead in the upper reaches of the Nerang River around Carrara. A good boat ramp at Carrara St is ideal for those who come down from Brisbane. This is a good area to catch whiting in winter, so you can have a look around and catch several flathead while checking it out for future whiting trips.

‘Til next month, fish for the future and hope we get a heap of rain.

Wayne started fishing seriously 22 years ago, and 19 years ago moved to the Broadwater region on the Gold Coast because it had the best and biggest whiting in southeast Queensland, which is still true to this day. He works most Saturdays at Oxenford BCF and spends almost all the rest of his time fishing and crabbing the Broadwater and the rivers that run into it. Since moving there he has discovered that despite a lot of boat traffic it is still a great place to fish, with an amazing variety of species to catch.
Previous Lowrance offers free software upgrade for HDS Carbon displays
Next Okuma Komodo SS 273 baitcast reel