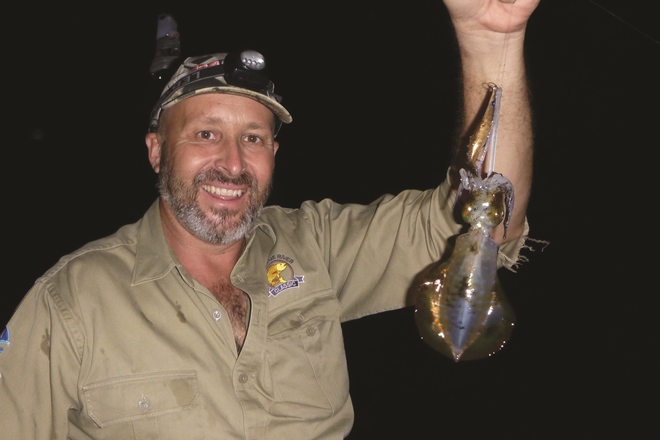 Give squidding a go after dark along well-lit waterfront walkways.

LIKE many, I used to think squidding was some super-special secret art reserved for cold winter nights.

The reality is squid are a year-round target in Moreton Bay and from a kayak are a species you can target with minimal effort. It’s no secret I like to fish shallow fringes around the bay. If I can’t see the bottom, it’s too deep. That means I also like to fish relatively clear water with rubbly bottom, which is perfect squid territory.

One day I was casting lures around and kept getting hits, but kept missing hook-ups on what I thought were fish. On closer inspection, I saw a small opaque ring on one of my trebles that looked like it came from a squid tentacle. So I backed the drag right off and managed to put my first squid in the net.

Over the years I have fine-tuned my method to include taking a couple of jigs with me every time I hit the bay. If I am chasing snapper in the bay, I’m usually casting soft plastics across a shallow reef while letting the wind and current push me around. In that situation, I will tie a 2.2 size squid jig onto a light line, cast it out behind me and park the rod in a holder. The jig is light enough to generally not hit the bottom and snag in 3-6m of water and the waves give it enough action to attract any squid within sight.

If the tide is up and I’m squidding the rocky fringes in shallow water, small jigs up to 1.8 size are what I’ll use. I tend to cast parallel to the shore and use an erratic retrieve. Don’t avoid really shallow water because you might miss an opportunity. My biggest squid was hooked in knee-deep water less than a metre off the rocks at Redcliffe on a tiny 1.5 size squid jig.

I prefer natural prawn and pilchard-coloured jigs and have seen how badly some cheap jigs perform, so stick to quality brands such as Yo-Zuri and Yamashita. They may cost a little more but they sit tail-up in the water, look more natural and are more snag resistant. To go squidding from a kayak, you don’t need to go far off land, though you do need the water to be relatively clean. This makes squid a great target for those who are getting used to paddling or just a bit concerned about venturing too far out.

A landing net, squid spike, 4-6lb rod and a couple of squid jigs is all you need to be in with a fair chance of landing a few when squidding. Handling squid needs to be talked about. They have a bitey bit in the middle under all the tentacles, so don’t allow it to attach to you and give you a nip because it does hurt. Guide the squid into your net and avoid letting the tentacles get a hold of you. I recommend killing the squid immediately, and be sure to do it properly. Squid have three brains to spike and if you don’t do it properly, your Esky will slowly but surely fill with ink as the stresses cause the squid to keep producing ink. You can find plenty of how-to videos on YouTube to learn the basics.

Eating quality also declines if not properly handled after catching. For me, evening sessions after work seem the best time to catch a feed of squid. Tide isn’t particularly important so long as there is some run to it. Paddling after dusk requires an all-round white light to be visible on your kayak, though I also like to park just outside the lit area of jetties and foreshore footpaths and cast around the darkened fringes because the squid seem to actively hunt those areas. Searching casts out into the dark at regular intervals garner results as well.

It is worth mentioning that you will get inked, no matter how careful you are. One day it will happen. Squid ink stains clothes and plastic kayaks. If you are pedantic about imperfections, don’t bring a squid anywhere near your kayak.


When reeling squid in, keep them in the water and don’t lift them out because when you do, they tend to fire ink, and in a kayak it’s likely to be right at you. Once alongside, slide the net under the squid and point the top of the tube in your direction so any ink gets shot away from you, then rinse any residual ink away as soon as you can to minimise staining.

I’ll wrap up with some squid information. They have a very short lifespan, breed prolifically and grow fast. For these reasons, there are no size or bag limits for squid in Queensland, but let common sense prevail and don’t take more than you need.

Tom lives in Brisbane and predominantly fishes from his small fleet of kayaks. He enjoys hitting rivers and creeks chasing bass and cod as well as heading offshore to catch snapper when conditions suit. In 2015 he will be spending more time getting his two young boys into camping and fishing.
Previous Southern Moreton Bay improving
Next Samaki Egi Inked rod