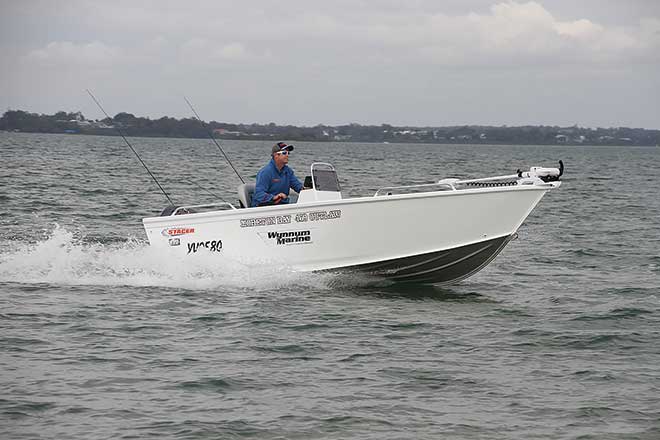 The EVO Advance Hull helped the Moreton Bay 469 Outlaw onto the plane quickly and smoothly.

THE Stacer Outlaw range has been labelled ‘most wanted’, and after putting the 469 model through a good test, I can understand why.

The Stacer Outlaw range comes in a mix of sizes starting with the 429, which is a tiller steer configuration, through to the 529, which comes in either a centre or side console setup. The test boat was a side console, but the model is also available as a tiller steer.After getting the keys from Justin Nichols at Wynnum Marine, Dan and I took the Outlaw for a run in Moreton Bay.

This was no standard Stacer Outlaw, as the team at Wynnum Marine had made key refinements to the base model and spec’d it up considerably before renaming it the Moreton Bay Outlaw. This moniker and the changes are an initiative of Wynnum Marine. Once the dealership team is finished with the boat, it is completely set up for bait and lure fishing and ready to hit the water.

As part of the Moreton Bay upgrade, the rear transom becomes a full transom. This gives the boat versatility, making it as suitable for smaller estuaries and Moreton Bay as it would be for offshore fishing on a good day. The full transom protects you from waves crashing into the back of the boat while also giving you a good place to lean when fishing.

Upgrading the transom on the Moreton Bay Outlaw allowed for a live well to be incorporated into the boat at the same level of the gunwale, and a removable bait board fits neatly into a holder in the transom. This customised rig comes standard with a Yamaha 60hp four-stroke outboard and two digital Yamaha gauges. While rated to 75hp, I don’t think you would be in any way disappointed with the performance of the 60hp, and the lower horsepower makes the package a little more affordable.

In addition, the Moreton Bay Outlaw package includes a Lowrance Hook-5 sounder/GPS combo and Minn Kota i-Pilot 55lb electric motor. I love that more and more boats are coming with electric motors, which turn them into lure fishing machines.

So, if you are keen on this style of fishing, you are well and truly catered for by the Moreton Bay Outlaw. Electric motors are versatile and indeed bait fishos can also use them to ‘spot lock’ instead of anchoring or to slow their drift. In fact, electric motors are probably a better option than anchors as they are quiet to deploy and you can easily adjust your position without having to pull the anchor up and down (often noisily). Other features of the Moreton Bay package include a white painted hull, safety gear, a Stacer braked alloy trailer and boat and trailer registrations.

Performance
As mentioned, the 60hp Yamaha packed plenty of punch, with the Moreton Bay 469 Outlaw’s EVO Advance Hull easily jumping onto the plane with two people seated down the back and the 77-litre underfloor fuel tank filled to the brim. Stacer’s EVO Advance Hull is renowned for good lift on the move as well as stability at rest.

The reverse chines also deflect water down and away from occupants, which provided a very dry ride, irrespective of what direction we were running over the chop. While it wasn’t blowing a gale, there was enough breeze and small chop to get a good feel for how the boat handled, and it managed to hold tight in the turns.

It may even be possible to run a slightly bigger prop, which would give even more grip in tight corners and increase top-end speed over the 51km/h we saw, but that is nit-picking. Overall, I was very impressed with the performance of this dedicated fishing machine.

Storage
Something that is always right at the top of my wish list, especially in smaller boats, is storage.

The Moreton Bay 469 Outlaw had good storage under the front casting platform, accessed via two large hatches. There was ample room to stow safety gear and tackle as well as the battery for the electric motor. In addition, two big side pockets kept items out of the way yet within easy reach.

The stern featured ample room for additional tackle boxes, bait Eskies and even a large Esky. The main battery was located in a well near the stern, which kept it out of the way and gave the boat a low centre of gravity to help stability at rest. Stacer’s side console has plenty of room to accommodate a larger sounder if you wanted to upgrade from the Lowrance included in the package.

This is a very neat and well laid-out boat that will suit many fishos. Of course, the Moreton Bay 469 Outlaw builds on the base model’s standard inclusions such as rod holders, carpeted floor, front cast deck, bow rails and a host of other goodies.With all Wynnum Marine’s Moreton Bay package additions, the 469 Outlaw can be towed away for about $31,500, which is not a bad price at all for a kitted-out family and fishing vessel.

However, the team at Wynnum Marine went one step further with the test boat, turning it into the ultimate Outlaw by fitting a revolutionary flooring option. When buying your Outlaw from Wynnum Marine, you have the option to upgrade the timber and carpet deck to a new Thermo Lite floor, which is like a fibreglass composite material.

It is lighter, stronger and lasts longer than timber and will not warp over time. In addition, instead of carpet, the floor and side decks are then covered in SeaDek, which is just an awesome flooring material.SeaDek is very easy to clean and a pleasure to stand on, making our test Moreton Bay Outlaw an even more comfortable and enjoyable package.

If you are keen to find out more about the Outlaw range or want to give your old boat a new lease of life with SeaDek flooring, give the team at Wynnum Marine a call on 07 3396 9777.

Alternatively, drop in and check out this boat for yourself at 31 Fox St, Wynnum or see a whole range of Stacers on the Wynnum Marine stand at the upcoming Brisbane Boat Show.