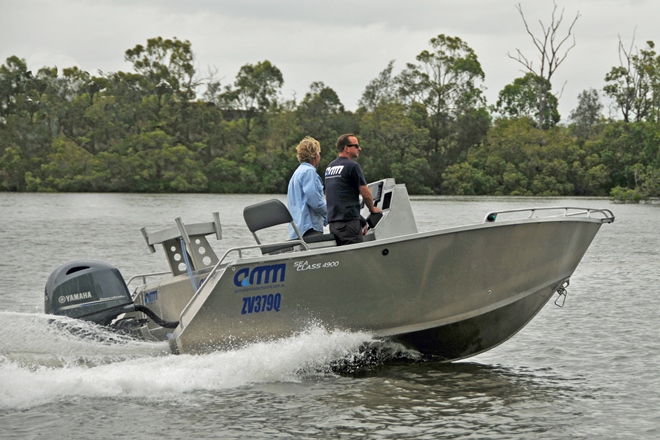 Stephen Roberts was rapt to be welcomed aboard by AMM’s Matthew Thomas for the first sea trials on Stephen’s Sea Class 4900 centre console.

Stephen dusts off the boating challenge with AMM

ESCAPING the dust and flies of the Pilbara region of Western Australia to the waters and fish of the Whitsundays brought with it a major challenge for plumber and gas fitter Stephen Roberts.

Having worked in the tough mining environment of Mount Newman where equipment has to be high quality or it will fail, Stephen wanted to find a boat that could handle everything from the abrasiveness of crushed coral beaches to thick mud hiding rocks in very tidal creeks, ripping tides and currents running against freshening breeze and the thrashing and gnashing of heavyweight pelagics. Something that could take a pounding, not flinch when the going gets rugged and above all, be first class in terms of safety. 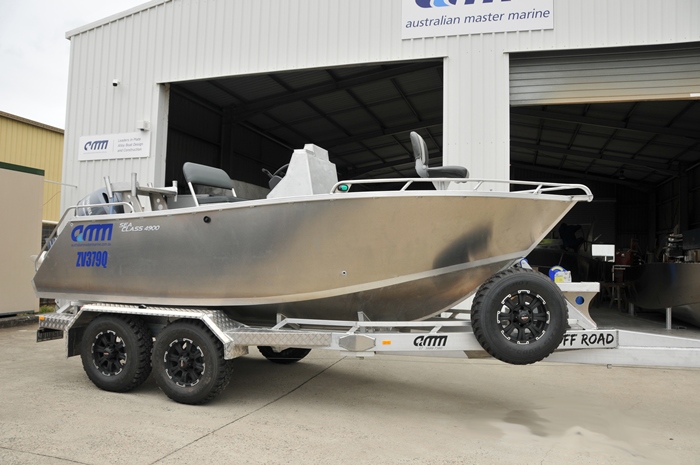 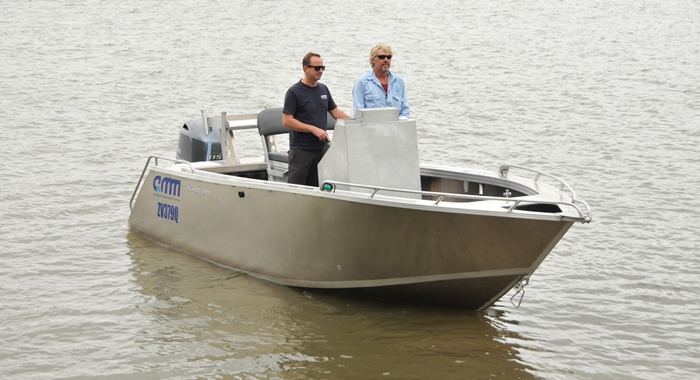 His choice: a personally tailored, plate alloy Sea Class 4900 centre console from Australian Master Marine. Armed with the real-world experience, having owned five previous boats from various manufacturers, Stephen had a very clear idea of what he wanted. And the accolades heaped on the AMM brand by another Airlie Beach resident living about 100m along the road from his house sealed the need to ramp the decision-making process up another couple of notches.

“I had read a few reviews about AMM boats and had seen one up the road, so I thought I would pop into the neighbour’s house and introduce myself,” Stephen said. “My neighbour was pretty impressed with his. I had a fairly firm idea of what I wanted, which was a good start, and then Matt and Bart (the Thomas brothers of AMM) were absolutely great to deal with. They kept in contact and sent through photos showing the progress of the build. Electronics and a 1kW transducer blew out the budget a bit, but it is good gear.”

The electronics are a Raymarine Axiom 9 Pro with a 1kW transducer as well as 3D side and down scans.

Stephen’s Sea Class is fitted with an 800mm centre console to provide a centre steering position and some protection from the elements without taking up too much room; a large work and bait table; built-in berley bucket and muncher; dual batteries; hydraulic steering; live bait tank and deck wash; folding centre console seat with hinged storage box below; plumbed kill tank; and a folding, moveable front seat.

His AMM Sea Class has extra sockets so the front seat can be relocated around the front of the boat on the casting platform. There’s a massive storage area under the front casting platform of the rig, which sits on an AMM-built Off Road aluminium boat trailer equipped with massive 265/75/16 off-road tyres. Powering the rig is a Yamaha F115XB.

But Stephen is keeping at least one link with the Pilbara – he named his Airlie Beach plumbing business Whaleback after the name of a mountain near Mount Newman in the iron ore belt of Western Australia. One of the final reasons for Stephen deciding to go with AMM was the ability to tailor features to his exact liking.

Accordingly, he was able to order a centre console without a screen or T-top, specify a hinged transom door, custom dive ladder, self-latching trailer hitch and an extended one-piece drawbar on the trailer among other design features and equipment incorporated into the final design.

For more on the AMM range, visit australianmastermarine.com.au

@@BNBFishingMag
Previous Lake Monduran fishing on fire
Next Restrictions in place in SEQ for raw prawns, yabbies and marine worms

C-MAP, a leader in digital marine cartography and cloud-based mapping, has launched a re-designed, simplified …