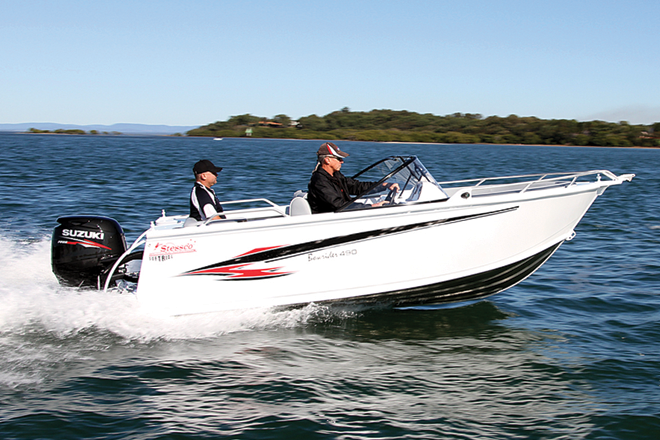 A 70hp four-stroke Suzuki was a good match for the Stessco.

FINDING a boat that keeps the partner happy yet ticks the fishing boxes can sometimes be a challenge, especially in boats under 5m. I’ve always been a fan of tiller and side console layouts but after having a play in Stessco’s new Bowrider 490 there is definitely another option in the mix.

Built locally in Queensland, the team at Stessco prides itself on delivering quality products, and the Bowrider is no exception.

With an overall length of 5.29m and a healthy beam of 2.25m, you have a decent amount of room that makes this boat versatile. Rated to a maximum horsepower of 80, the test boat performed well with a 70hp four-stroke Suzuki on the back and three people on board. There was plenty of grunt down low, providing you with an excellent hole shot and good top end as the Suzuki wound out through the rev range.

With a deadrise of 16 degrees, the hull planed at a relatively low speed of 16km/h at about 3000rpm. However it definitely liked a bit more throttle, which lifted the hull and increased speed to about 36km/h at 4000rpm. Here the Stessco Bowrider 490 was in its element, though it handled even more speed just as well in the great conditions of the Pumicestone Passage.

But we didn’t run it too long at high speed because the engine was still relatively new and being run in. Constructed with 3mm top sides and hull, the Bowrider 490 is a neat little package that packs plenty of punch in terms of performance and ride. I would class this as an open boat, though the wrap-around windscreen offered good protection from the wind and allowed us to maintain a conversation while travelling along.

The super-quiet Suzuki also played its part here, with minimal engine noise making its way into the cockpit. The boat remained very dry during the test run, which included several manoeuvres and running back and forth over some wake as well as chop at the Passage entrance. If you were thinking of taking the boat out in rough conditions however, the addition of a bimini and clears would definitely be the way to go.

In terms of fishing options, you could easily bait fish for a mix of species in Moreton Bay. On the other hand, the Stessco Bowrider 490 would be equally at home chasing whiting in the Nerang River while you sat in comfort on the reversible deluxe seats. Adding an electric motor on the bow would open up a whole host of lure fishing options from impoundment barra fishing to chasing flathead around Jumpinpin.

The best part is Stessco has already designed the bowrider section of the boat with an in-fill that can be used as a large and flat platform to fish from. The in-fill can then be neatly placed on the floor in the bowrider section so it is totally out of the way but there if and when you want it. Cushions can also be placed under the seats, or if you want, spread them out to make a great lounge area for the partner or kids.
But the Bowrider 490’s versatility doesn’t end there. By adding a small ski pole to the stern you could happily tow the kids around Somerset Dam or a similar waterway for the day and use only a skerrick of unleaded. With an 80-litre underfloor fuel tank and a very fuel efficient engine on the back you will get some awesome range out of this boat and it won’t break the bank each time you have to fill or top up the tank.

While mentioning dollars it is worth touching on the price, which comes in just under $30,000 with the Suzuki 70hp four-stroke, Stessco 5.0 trailer, safety gear and boat and trailer registration. I consider this fairly good value for money, especially given what is included.

Another standard feature of the Stessco Bowrider 490 is a rear lounge with backrest. The rear lounge offers not only comfortable seating but doubles as a large storage area where you can keep a variety of items in easy reach. Two large side pockets provide extra storage, as do the compartments under the bowrider section.

The driving position was fairly good and even at 188cm tall I had enough space to sit and manoeuvre the steering wheel. Vision from the driver’s seat was good and you can stand and drive if necessary.

Overall, Stessco has delivered a high-quality boat and its versatility is what will make it desirable for a lot of people. The test boat was supplied by the team from Motorsport Marine at Burpengary.

If you are interested in checking out this versatile boat, drop by the dealership at 11 Brewers St, Burpengary and the staff will happily answer any questions you may have.

Alternatively, give the team a call on 07 3888 0555 or jump on the website for more information at www.motor sportmarine.com.au