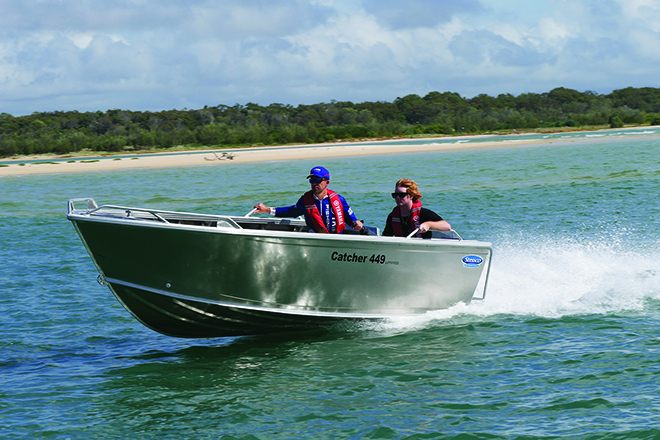 At WOT with two people on board the Stessco Catcher 449 Limited hit a fraction over 54km/h.

AS much as it is awesome fun to run around in flash big new rigs for boat reviews, sometimes it is good to get back into something that would suit a mix of boaters from the first-timer to the hard-core fisho and crabber.

This boat has an overall length of 4.65m and a beam of 2.11m, which equates to plenty of fishing room and that is evident as soon as you hop on board. The tiller-steer test boat was powered by a Yamaha 50hp four-stroke, which is the maximum-rated donk you can put on the back.

I didn’t see this as overkill, and in fact it was quite pleasant to drive, especially with the trim built into the hand throttle control. The rear grab rail was also in a good position to hold onto, so you were well braced when travelling along and cornering.

In terms of fit-out, there is a decent-sized casting platform at the bow and its length is effectively extended by having it at the same level as the front bench seat. In the Limited models, this is a standard feature and something I would include even if going for the standard model.

While not massive, you still have plenty of room for two anglers to easily flick lures at the same time.The carpeted casting platform also makes a good place to stand when entering the boat from a pontoon or similar. It also gives you a huge amount of under-deck storage, which is gold in a smaller boat.

Pockets down both sides of the boat provide more storage, and you have the option to change up the rear of the boat and add an extra casting platform. A rear casting platform was not fitted to the test boat, but it’s something I would consider to make the boat more of an all-rounder.

Sure, it is already a perfect platform for hard-core fishos and crabbers, but an additional casting platform would make the boat more versatile for different styles of fishing such as luring. Given the boat is of reasonable size and depth, it would be at home both in Moreton Bay chasing big longtails and in places such as Monduran Dam targeting the iconic barramundi.

To take this boat to the next level, I’d also add an electric motor. While electric motors were initially used to move around in silence chasing fish, more and more people are using them as anchors. This is a great idea, especially with the self-deploy motors available these days, as it makes anchoring much easier for people with back problems or who are not as agile as they used to be.

In terms of performance, a quick twist of the throttle had the Stessco Catcher 449 up and moving. With two people on board we reached a top speed of just under 55km/h, which is quick for a boat of this size. The best thing is, at full speed you are still getting excellent economy at just under 3km per litre (2.91), which gives an impressive range.

Even better was at about 3500rpm you can travel at a respectable 30km/h while returning an economy figure of 4.3km per litre, which opens up a whole range of fishing opportunities. If you were thinking of using this boat for trolling for flathead, snapper or other species, at 1000rpm or just in gear, average consumption is a meagre 1.55 litres per hour.

These figures mean you can put in plenty of hours on the water dragging lures around and use only a very small amount of fuel. Overall, the Stessco Catcher 449 Limited presented as a no-fuss fishing boat with all the things you need to get out on the water.

Add a few options and you soon have a very capable fishing boat that is going to lend itself to a mix of fishing situations. The current drive-away RRP for this boat with a Yamaha 50hp four-stroke outboard, trailer and rego is $18,699 as supplied by the team at Sunshine Coast Yamaha.

However, tell them Ben said to ask for your best deal on this package!

For more information on this boat and others in the Stessco range, call 07 5346 9981 or check out sunshinecoastyamaha.com.au
Alternatively, drop in and see the team at the new dealership located at 14 Machinery Ave, Warana.