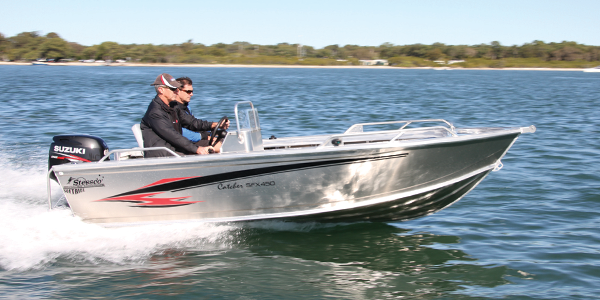 The Stessco Catcher looks good trimmed out and ripping across the water.

OVER the past few years, boats around the 4.5m mark have become increasingly popular. Whether it is because they are easy to store, easy to launch when alone or easy on the wallet, demand has certainly grown. With increased consumer demand, manufacturers have also refined these boats, offering more and more features to a point where you can now get a very capable vessel that includes a host of options but won’t break the bank.

One such model is the Australian-designed and built Stessco Catcher SFX450 SC, which I tested recently. The SFX model sits at the top of the Catcher range, with this boat measuring 4.5m long. Catchers are available in a couple of configurations, and I was testing the side console.

Stessco has nailed the target market and catered for a mix of budgets with its Catcher range, from the base model right through to the fully optioned boats. The SFX I tested included a host of features. In particular, you get a front casting platform with two storage hatches, rear casting deck with three hatches and a splash tray.

These are all things I like in a fishing boat of this size. Not only do you effectively double your storage capacity with every deck, you also maintain a clean area to fish from that actually offers a better vantage point. Another benefit of the casting platforms, especially the rear one, is they make it easier to get in and out of the boat.

A full floor finishes off the look nicely and allows for a 60-litre underfloor fuel tank. The test boat was fitted with a 60hp four-stroke Suzuki, so you’ll have more than enough range with that amount of fuel under the floor. Even in smaller boats, I much prefer the underfloor tanks to the tote tanks you often see stowed at the back of the boat.

An underfloor tank moves more weight forward and into the centre of the boat, which results in increased stability and makes it easier to get the boat onto the plane. Other standard inclusions that tie in well and make this a true fishing boat are the 30-litre live bait tank, a massive 109-litre unplumbed keeper tank and two long side pockets.

The list goes on and on, so I suggest checking with your local dealer for a full run-down on what is packed into this neat 4.5m boat. Now you might be wondering about the price for all these features. Well, the whole package including a DF60ATL Suzuki, Stessco 4.3HD trailer, safety gear, electrics pack and 12 months boat and trailer rego comes in at just under $22,000.

That doesn’t include a sounder, so you can choose whichever model you prefer. If I was buying this boat, I’d also get an electric motor fitted to the bow with an extra battery under the front casting deck. Even with the sounder and electric motor added on, you should still get plenty of change from 25 grand and have a very well decked out boat that is ideal for bait and lure fishing, easy to store, yet big enough to cut through a reasonable amount of chop when the wind blows up.

In terms of performance, I was very impressed. A 60hp motor is the maximum horsepower allowed for the Catcher 450, but it was very easy to drive and didn’t do anything unexpected as it was put through a series of turns and manoeuvres.
However, with a 50hp you would see little difference in performance except a slightly lower top speed, and it would be a bit cheaper.

The side console was sufficient for the size of the boat, with room for a decent sounder. It was also high enough for me to get my legs under and had a handy grab rail around and over the Perspex windscreen. As mentioned, the underfloor fuel tank aided stability and I could confidently walk around the boat. Two deluxe pedestal seats come standard and each has four possible mounting positions, so you can rearrange the layout to suit your fishing or driving needs.


Overall, the Stessco Catcher SFX450 SC brought plenty to the table in terms of inclusions and performance. If you are after a well-appointed boat that performs well and is ready to hit the water straight out of the box, it would definitely be worth considering. The test boat was supplied by Motorsport Marine at Burpengary, so for more information, give the team a call on 07 3888 0555 or visit www.motorsportmarine.com.au

I’d also suggest dropping by the dealership or a boat show and having a first-hand look at the Catcher range – I’m sure you will be impressed.