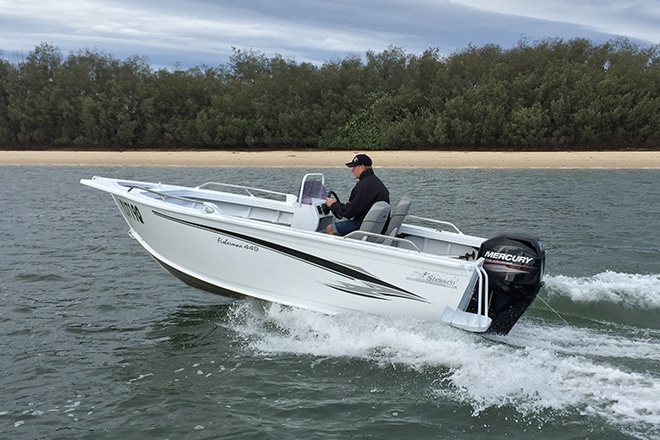 The Stessco Fisherman 449 planed swiftly and easily thanks to the generous grunt on tap from the Mercury 50hp FourStroke.

I RECENTLY had the opportunity to water test the brand-new Stessco Fisherman 449.

I jumped in the Stessco Fisherman 449 and had a look around as I waited at the Karee Marine yard while dealership owner Trevor prepared the boat with registration stickers.

From the outset this boat impressed. Carpeted floor throughout, 10 ribs a side (as opposed to five in many small boats), a plumbed live bait tank, tidy side console, front cast deck and 50hp Mercury FourStroke had me thinking the Fisherman 449 would be more expensive than I’d anticipated.

Not so according to Trevor. This Stessco represents outstanding value with a drive-away price of just $17,990. Yes, that price includes the 50hp four-stroke motor, Dunbier trailer, smooth water safety gear and a year of registration. As I said, impressive, right?

After learning of the sharp price I was keen to find out if the Fisherman was merely a cut-price special or a genuine contender in the heavily populated 4-5m side console market. We launched from Jacobs Well with the plan of heading to Jumpinpin, grabbing a few photos and playing in the bar.

The Mercury FourStroke was fresh as a daisy, with just two minutes on the clock, so I was hesitant to give it full stick. Regardless, nudging the throttle lever forwards resulted in the Stessco Fisherman 449 climbing quickly onto the plane and settling into a happy cruising speed of 40km/h.

Something I noticed straight away was the ‘on rails’ handling attitude displayed by the Fisherman. While cruising towards the Pin over flat water, small adjustments on the steering wheel created an instantaneous reaction from the Stessco. A couple of hard cornering attempts resulted in no cavitation but simply the boat going where I told it to.

The beauty of aluminium boats versus fibreglass rigs is their ready ability to absorb a greater amount of punishment in terms of pulling up on shaly and rocky beaches for a break. Which is exactly what we did, and I hopped onto the beach to properly take in the Fisherman 449.

The boat gives the impression of being bigger than it actually is, with high, 3mm-thick plate sides, a wide 2.12m beam that carries a long way forwards, broad gunwales and that 50hp Mercury out back. The fresh white paint job appeared to be of high quality and in terms of fit and finish I couldn’t fault the boat.

Lifting the two front storage hatches revealed very deep storage spaces as well as a 25-litre fuel tank. An underfloor fuel tank is an optional extra on this rig and if it was my boat that’s a box I’d likely tick. While the 25-litre tank actually adds a bit of weight ahead of the driver, helping the boat to climb flatter onto the plane and punch through chop with a bit more zest, I was mildly concerned that the tank was not secured against a couple of L brackets or with a battery box style strap.

However, even after doing some borderline silly things in Jumpinpin Bar, upon returning to the ramp I was pleased to see the tank hadn’t budged. For me, securing the tank would provide more peace of mind than anything. So, exterior and interior appraisals complete, we motored on to the bar.

The tide was running out something fierce, resulting in a significant number of 1-2m pressure waves forming and breaking in the bar’s shallows.

Trevor was driving an Extreme 545 Side Console (full review in the August edition) and playing up for the camera over the breaking waves, while I stood in the Fisherman and attempted to get decent photos and videos of his antics.

Becoming somewhat absorbed in the filming, I didn’t notice until almost too late that I’d drifted into a shallower section of the bar, perilously close to breaking waves. A quick punch of the 50hp Mercury had me back to safety in no time, but it was due to the Stessco Fisherman 449 excellent stability and easy handling of the swell coming through that I’d been caught off guard.

It is a genuinely stable boat (no doubt thanks to that chunky 2.12m beam) in which I’d have no hesitation running offshore in a westerly or light easterly wind. Even when I didn’t have the bow facing into the waves, the Stessco just rolled over the swell with a casual ease.

At no point did I feel like the boat was out of its depth. Heading against the tide towards the ramp I ran the motor up to 5100rpm (not wide open throttle) and the speedo sat smack on 50km/h, which is plenty spritely for what is essentially a budget bay and creek fishing boat.

I reckon with a following tide and full throttle you’d see 60km/h in this rig. Also impressive was how dry the Fisherman was.
As in, totally dry. Not once did any water spray over the bow or sides and into the boat, despite the stiff westerly wind and crossing back and forth over the Extreme’s wake as well as the wake from other boat traffic, even when taking the waves on the front quarters.

This may have something to do with the seriously high sides all round, as the Fisherman doesn’t have an extreme reverse chine or other form of secondary spray deflection. In summary, it’s fair to say the Stessco Fisherman 449 exceeded my expectations in every way.

It is definitely a boat worthy of further investigation as an inshore fishing companion, especially considering the ultra-keen drive-away price from Karee Marine.

Daniel is BNB's subeditor and occasional fish-wrangler. If you've got a great story or at least an idea for one, flick Dan an email at editorial@bnbfishing.com.au
Previous Tips on transporting kayaks
Next Australian bass is back