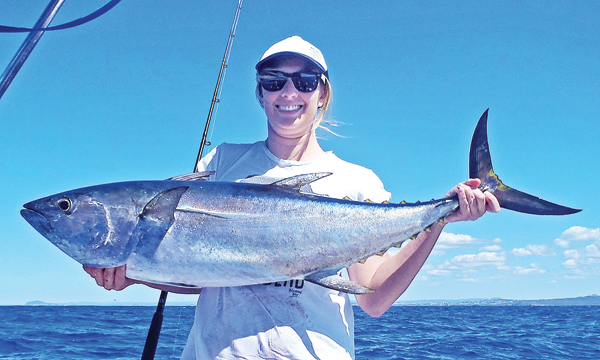 Maddie was fishing Chardons Reef with Chicko Vella from Davo’s when she boated this longtail tuna. Photo: fishingnoosa.com.au

AS November arrives here on the Sunshine Coast, it’s time to start preparing the offshore gear needed to chase the ‘reel’ speedsters of the sea including mackerel, tuna, dolphinfish and marlin. This month Sunshine Coast offshore fishing begins to heat up for the offshore fisho, whether you’re after a good feed of reef fish or just seeking that screaming run from a pelagic. The Sunshine Coast has more than enough fishing variety for all anglers.

Bait schools are prevalent right across the coast and have been for the past few months, and local offshore expert Chicko is predicting a great pelagic season. Spanish, spotted and school mackerel have started to come into the Noosa region in good numbers, however if you’re chasing that trophy mackerel then plan a trip to Double Island Point because a stack of fish are holding in the deeper water there.

Dolphinfish, cobia, snapper, reds, trout, jewfish and many more species are about in addition to the macks. Kayak anglers have been getting stuck into the pelagic action, with some quality fish coming over the sides. Trolling seems to be the key in close, and areas that have produced are around Little and Big Halls reefs off Noosa and Old Woman Island off Mudjimba Beach.

Trolling the wider grounds can be a great way to tangle with a few pelagics. Spanish mackerel, dolphinfish and the odd marlin is on the bite out wide. This season be sure to try the Zerek Bluewater Craft Limited PelagicZ hard-bodies in both the 140mm and 180mm sizes. These lures are a must have in every angler’s box.

In closer, North Reef has been the pick of the reefs for pretty much everything from snapper up to 5kg, jewfish, cobia, a variety of tuna and mackerel. Thumper trout have started to show on Sunshine Reef, with most anglers tempting them by using pilchards or good-quality squid. Micro jigs have continued their dominance off the coast, and with a great range now in both Davo’s shops, you can be sure you get the best possible presentation to the fish.

The Noosa River has seen great numbers of bigeye trevally, GTs, cale cale trevally, bream, flathead and whiting. Big predatory fish are hanging around the bait schools coming in and out on the tides at the mouth. The best time to fish this particular spot is during the tide changes. Soft plastic lures cast out on light graphite outfits are ideal.

The Squidgy IFISH Wriggler in 100mm size has caught stacks of fish over the past month, as has the Fuze Pulse Vibe. The Frying Pan flats have played host to some cracker flathead, bream and whiting up to 40cm. Surface poppers and walkers are working extremely well, with the smaller Zerek Poparazzis leading the way.

You can also customise your surface lures to work even better by adding assist hooks. The Ecogear range of assist hooks is perfectly suited for the above lures and in my experience can double your hook-up rate. In the upriver stretch between the lakes the fishing has fired right up, with jacks really coming onto the bite.

Last season was quite tough for catching these feisty fish, however with the way this year’s shaping up it will be a great season. As far as sportfish go, I really love to chase tarpon. With their powerful runs, bony jaws and raspy teeth, these fish are just awesome to capture.

Tarpon and jacks have been in good numbers between the lakes and up into Kin Kin Creek. Jew, trevally and mangrove jack have been coming onto the bite after dark in the Maroochy River around the motorway bridge, with the start of the run-out tide fishing best. Live baits have been the key, and the bigger the better.

Fishing upriver from the mouth of Coolum Creek to Dunethin Rock has readily produced big flathead, bream, trevally, school jew and jacks. Remember to move your position often. I find it’s better to cover lots of ground, keeping one eye on the sounder and the other on your rod.

November means warmer air and water temperatures, which will bring an influx of summer whiting, yellowfin bream and flathead on the bite. Bait options such as live worms and pipis have been the standouts and fishos have had plenty of success worming along Noosa North Shore and Marcoola beaches.

Most of the pipis are coming from Noosa North Shore down near the water’s edge. Remember your bag limit is 30 for beach worms and 50 for pipis, but to create a great day’s fishing you don’t always need to collect your bag limit, so try to keep your bait catch to a minimum to ensure we have a sustainable fishing future.

With gutters starting to become more common, fishing the white water has proven successful because that is where the bigger fish are hanging. The rig of choice is a simple running sinker rig or to spice things up, try using one of Black Magic’s Whiting Whackers or Snatchers.

For all the best advice, the gear you need and to find out where the fish are biting, call into Davo’s Tackle World Noosa or Davo’s Northshore Bait & Tackle at Marcoola. Also check out the latest catches, fishing reports and bar crossing info at www.fishingnoosa.com.au