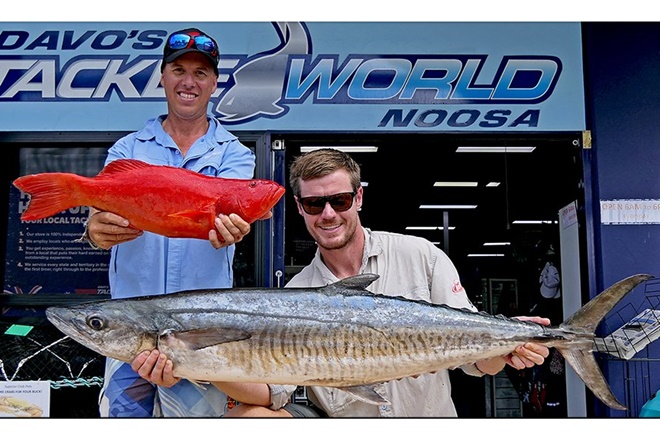 Dan Lever and his mate Geoff Stirzaker fished last Thursday and popped into Davo's on the way home in the afternoon with their standouts... a 3kg coral trout and a 14kg spanish mackerel. Photo: fishingnoosa.com.au

This week’s weather has been warmer than usual, rising the water temperature and making the fish aggressive. The offshore scene has been alive this week with anglers making do of short weather windows and reaping the rewards.

North reef as well as Double Island has been the land of red this week. Scarlet sea perch as well coral trout and snapper have all been boated in healthy numbers, with anglers preferring low light conditions with plenty of run. These fish have been taken on both bait and lures, with heavily weighted pilchards on paternoster rigs as well as metal jigs being the most successful.

In closer Chardons Reef as well as Sunshine Reef has been the pick for anglers chasing reef fish such as lipper and squire with the big Spanish mackerel cruising around these areas as well. For anglers chasing these fish, slow trolling dead baits such as lesser queenfish, slimy mackerel and sauries is the ideal presentation. Don’t be shy to troll close to the boat as the sound of the outboard will entice fish to the baits vicinity. For tuna fisherman, fish have been in close around hells gates and in the bay are. Species have been varied with long tail being the most common and yellowfin amongst the mix. To target these line burners, anglers need to ‘match the hatch’. Using smaller slugs such as the ‘TT lures 30 gram metal slug’ in pink has seen successful results as they are a smaller presentation but still have the weight to cast.

Halls reef has seen some quality snapper as well as tusk fish and Maori cod. These have been caught on whole slimy mackerel on weighted Tru-turn gang hooks and pilchard/squid combos on pater-noster rigs. For anglers preferring lures, 5-7 inch z man streakz have been unmatched on the reefies rigged on 3/8th to 1 once jig heads. A slower approach has seen the most success with a single and double hops along the bottom.

The Noosa River has also felt the effect of the warm week with mangrove jacks, trevally and whiting really turning it on for the estuary angler. The red dogs have been angry and in numbers with success on sunken snags near the dog beach as well as the upper reaches with live mullet and fillet. After dark is the best time to target these elusive fish as they feed during fading light, so optimise your chances and hit the snags! Trevally fisherman have seen the river come alive with the warmer weather as GT are aggressively hunting bait fish around woods bay and the dog beach. These fish are best targeted with surface walkers such the Atomic K9 and the Cultiva ‘Zip-n-Ziggy’. A twitch, twitch pause action through the rod generates a side to side walk action that trevally simply can’t resist. Be sure to target these fish during low light periods as they are less hesitant to hit surface lures. Other species of trevally such as goldens and diamonds have also been boated by lucky anglers near the coast guard and woods bay area. These fish are bottom feeders and hit lures and bait presentations such as prawns and smaller bait fish. Soft plastics such as Keitech easy shiner 3 inch in ‘sexy shad’ and squidgy prawn wrigglers in ‘blood worm’ have been the predominant producer of success. A single and double hop of these plastics will bring the best success but be sure to keep contact with the bottom to give the fish a chance to eat. With the recent rain the crabs are on the move, make sure you get your pots in with the deeper more saline waters, the better bucks will be holding there.

Along the beaches deep gutters formed by cyclone Oma have granted beach fisherman with some of the best gutters in months. Jewies and tailor are about with most fisherman collecting great feeds of elbow slapper whiting as well as dart, bream and flathead. For whiting, the traditional beach worm on a running all sinker rig has been killing it, as for bream and flathead, pilchards offer a better chance.

The freshwater impoundments have been alive with fish. Saratoga, bass and yellow belly have all been actively feeding as a result of this week’s warm weather. Saratoga are very aware and a stealth approach is required if you wish to target them. These fish eat anything that fits in their mouth and a lure that creates a surface commotion will do really well such as the z-man frogz. A slow roll with these lures will draws bites when fished around logs and weed edges. If chasing bass, use your sounder to find a school, fish lures such as the Jackall TN50 and perform slow lifts through the school and it won’t take long until there is a fish on board.

Now for all the  latest information log onto www.fishingnoosa.com.au for up to date bar and fishing reports, don’t forget to drop into Davo’s Tackle World, Davo’s Boating and Outdoor in Noosa and Davo’s Northshore Bait & Tackle at Marcoola for all the right equipment, bait and advice to get you catching. Be sure to follow us on Facebook and remember Tight Lines and Bent Spines!