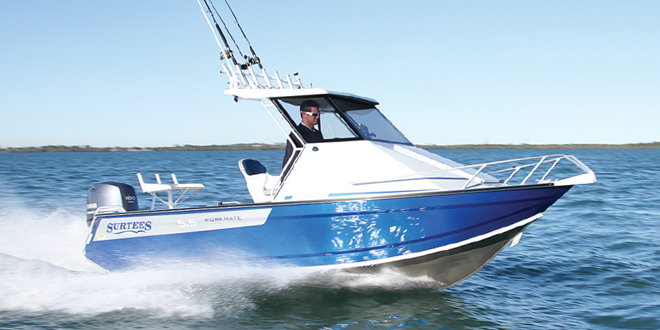 The ballast chamber system enables smooth running in a mix of conditions.

I AM a very patriotic Australian but need to give credit where credit is due.

Now I’m not talking about the Kiwis’ win (well actually it was a shellacking) in the first game of the Bledisloe Cup but rather one of their boat designs, the multi award-winning Surtees brand. Like Australia, New Zealand has some pretty harsh conditions and these boats have been designed to handle them. I recently took a couple of models for a spin but for this review I’ll cover the smaller version, the 5.5 Workmate.

The test boat was fitted with a 100hp 4-stroke Yamaha, which is just shy of the maximum rating of 115hp for the 5.5m model. But even with the 100hp engine it certainly packed plenty of punch and had heaps of get up and go. The hole shot was very quick, with the hull remaining fairly level as it jumped on to the plane.
With an overall length of 5.58m, the half cabin was very nimble and easy to throw around as it was put through a series of tight turns and some straight line speed runs. A standard but unique feature of the Surtees models is the open and close water chamber built into the hull. This chamber has been designed to enable the hull to perform at its best in a variety of situations.

To utilise the ballast cavity you do have to manually open and close it through a cord style pulley system, but this is relatively easy to do. During the test run we did a few different trials with the chamber full and empty to see the difference. The advantage of being able to close the chamber when it is full means it still assists the hull when under way. It was interesting that top speed was only reduced by one or two kilometres per hour but it did give the boat a more solid feel, and would pay dividends in rougher conditions. Conversely, while at rest it did increase the overall stability of the hull, which is a bonus for a boat of this size.

The hull design of a fine entry at the bow allows the boat to cut through the chop and the variable deadrise ensures a smooth ride. Moving on to the driving position, there was enough room to stand and drive the boat with very good vision through the large slanted windscreen. The cabin, while not big, does provide a good spot to store your gear out of the way and protect it from the elements. With the bunk infills in place there was an OK size bed where you could curl up if needed, but would be more suited to being a great place for the kids to hang out while you fished.

It is worth noting that removing the bunk infills allowed very good access to the large hatch in the cabin, which gave excellent access to the anchor and bow of the boat. In a cabin boat of this size, there needs to be some compromise when it comes to space. Thankfully the compromise is in the cabin area, leaving plenty of room to fish. And that is what this boat has been designed to do and forms part of the Surtees tag line ‘built to fish’.

However compared to an open boat, you are a little more restricted with what type of fishing you can and can’t do, but there are plenty of positives as well. The hard top with fully enclosed cabin provides an extremely protected area from which to drive. It also has very comfortable, solid seats positioned out of the elements, which can be a bonus, especially in the cooler months and when it becomes a bit rough.

The internal layout is pretty simple, with large side pockets for storage. A couple of decent size pockets are fitted in the cabin as well, which means your gear is in easy reach. Additional storage has also been built into the seat boxes, with each having front and rear facing seats.

The internal design is pretty functional, maximising the room and making it easy to move around. Behind the rear bench seat is a shelf that houses the batteries. On the test boat, the batteries were located in the middle which is a good move. Isolation switches are very easy to get to and the batteries were fitted with an LED light system that shows you the charge rate at a glance. This will be very helpful if you haven’t used your boat for a while or if running a lot of electronic equipment. Another good feature of the Surtees boats is that the live-well has a see-through panel, which enables you to easily keep an eye on your live bait. This way if they are looking a bit crook or one dies you can address the situation before it gets worse and you lose all your live bait.

Another feature I liked was the gunwales, which I would class as very wide. This has a few benefits including making getting aboard, especially from a pontoon, much easier. They also provide a convenient and comfortable place to sit or lean against while fishing. A number of rod holders are built into the gunwales as well as some drink holders, which is another good idea. But don’t just put drinks in them, as they would also make a great place for a teardrop sinker on a bottom bashing rig.

Overall you have a comfortable boat that is well built for pretty much any conditions that you want to drive or fish in. The clean interior and functional layout utilises the space very well and would make washing a breeze, which is definitely a bonus. For more information on this or other boats in the range, give the guys at Northside Marine a call on 07 3265 8000 or you can check them out at the upcoming Brisbane Boat Show. The 5.5 Workmate starts at $43,200 fitted with a Yamaha 100hp 4-stroke, Redco trailer, safety gear and rego. With a swag of options, the drive-away price of the test boat was $56,356.