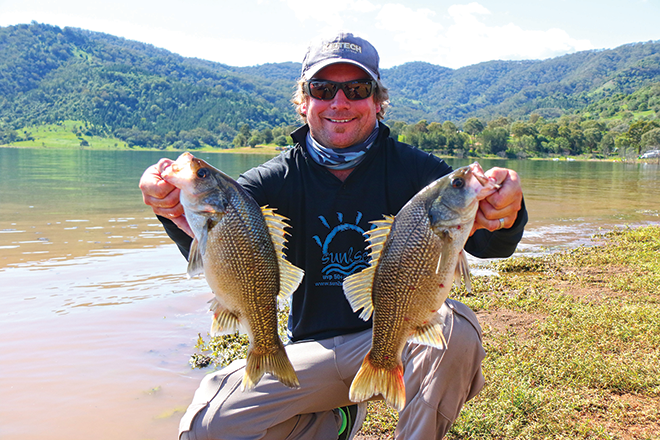 Pro winner Nigel Middleton was happy with his hauls of bass.

His winning margin was just 50g over current Samurai Rods Angler of the Year Dean Silvester, with Mark Ferguson rounding out the top three in the Tackle Tactics Glenbawn Classic. Nigel earned a nice bonus for his win in the form of a $3300 cheque.

With glorious weather greeting the anglers and a transition period that hadn’t been fished by many, it was going to come down to who could adapt, read the pattern, change with the weather and once hooked, get the quality bass into the boat through the thick-lined timbered areas of Lake Glenbawn.

Mixed reports from anglers on pre-fish day saw final weight predictions nearly 3kg apart, which told us that some anglers really hadn’t found the pattern and others were stomping them on practice day. Middleton used a combination of techniques to claim his maiden title that included the most popular technique of the tournament: the vertical Berkley Gulp Minnow Grub technique.

The Gulp technique has proven to be one of the most popular and successful patterns for targeting bass this season, with multiple wins for anglers using Berkley Gulp Minnow Grubs. The anglers using this technique rely heavily on their sounders and sit offshore, basically working the lure up and down through the suspended schools of bass.

Imparting different actions, fall rates, line weights, rod actions, shakes, stops, bumps and reel speeds, this technique is a very individual thing, and many only establish confidence in it after some time. You may hear about how the anglers mention the pattern inside the pattern in relation to fishing.

Well the Gulp technique definitely has a lot of different patterns inside the pattern, and Nigel was the angler who mastered it best over the weekend. Nigel’s go-to setup for the weekend consisted of a Weapons Custom Rod in 1-3kg fast action matched with a Shimano spin reel spooled with Sunline Super PE 4lb and topped off with Sunline FC Rock 6lb leader.

The standout jig head was a Berkley Dam Deep in Watermelon colour rigged with either a Berkley Gulp 3” Minnow Grub in Pumpkinseed or a Keitech 3.5” Mad Wag Mini in Gold. Dean Silvester, who placed second in the Pro division, has some of the most amazing form in Australian bass fishing history.

Dean took home nearly $2000 in cash and prizes and has one hand on another lucrative Samurai Rods Angler of the Year title. Pre-fishing with good friend and third place-getter Mark Ferguson, the guys soon worked out a pattern and it was very easy for them to secure a limit with 2” Keitech Easy Shiners fished through the schools.

However, they found bigger bass fell to Jackall chatterbaits on the edges. The big edge bite felt very sporadic, and Dean wasn’t comfortable relying on it, so he moved further offshore and worked out the vertical Berkley Gulp technique could definitely give him numbers and bigger fish than what he had been getting.

His key area was located in 20-23m, with active fish sitting in the tops of the submerged trees. Catching over 20 fish for the session on the Dobyns Champion Extreme 703 rod, Dean relied on 8lb Sunline FC Sniper to do the hard yards once the bass were hooked.

Mark Ferguson has incredible form on Glenbawn and is currently in fourth place in the AOY race and second in Rookie of the Year standings after the fourth round of the Atomic B.A.S.S. Australia Nation Series. As mentioned, Mark worked hard with Dean on the practice day and also felt the offshore Gulp bite was more reliable and produced larger bass than most of the other locations and techniques at Glenbawn.

Heading to the eight-knot zone, Mark constantly put bass in the well through the weekend and discovered that working the Gulp faster definitely created more bites than the dead-slow technique many of the anglers used. Sitting in 18-23m of water and dragging the bigger bass out of the trees takes some work, and to do the job Mark relied on his brand-new Abu Garcia ALX 2500 spooled with 8lb Sunline main line and leader matched to a Duff-rods stick.

In the Co-Angler division, Dayne Taylor from Coffs Harbour took out his first-ever Atomic B.A.S.S. Australia Nation event and had to come from behind to snatch the win. Pre-fishing with friend Dale Johnson who he worked with at motackle.com.au, they found the bass in the eight-knot zone and were happy that many of the pros headed to the same location over the weekend.

Another angler who varied his techniques over the weekend, in the first session Dayne relied on the vertical Gulp method to secure his bag, in the second session he worked Jackall TN60s and then he used a Smak ice jig in the final session to finish off his tournament.

Taking home second place in the Co-Angler division was Allan Price. With one Co-Angler win already under his belt, Allan had an amazing tournament and walked away with a swag of gear with his second-place finish. A very accomplished local who has extensive knowledge of the fishery, Allan also used three different techniques and adapted through the sessions.

His go-to lures were Keitech plastics and the popular Berkley Gulp Minnow Grubs. Allan’s gear consisted of a G-Loomis Bronze Back 6’3” Spin matched with a Daiwa Advantage 2000 reel spooled with Sunline Super PE 6lb main line and Sunline FC Rock 6lb leader.
The third-placed Co-Angler was Queenslander James Buchner who has been very consistent over the years and is well within striking distance of the Co-Angler of the Year title. James focused his attention on the Berkley Gulp deep jigging technique and matched his black lure with a black 1/4oz TT DemonZ jig head.

James’s deep Gulp technique included using a 1-4kg Millerods spin stick matched to a Daiwa reel spooled with 12lb Toray braid and 6lb Sunline FC Rock leader. James lived up to his reputation by holding down the Big Bass after session one, and he was towards the front of the field all tournament.

With a strong history of finishing well in the series, James may have only just started his run at the Samurai Rods Co-Angler of the Year title and is poised to take it out if he gets a sniff. With three rounds to go, the series is really heating up and many anglers are vying for extra points at each round.

Every bite is becoming critical and every point can be the difference between qualifying and missing out on the Atomic B.A.S.S. Australia Nation Championship to be held on Lake Boondooma in the last weekend of August.
For more on the leading bass tournaments in Australia, head to bassaustralia.com.au