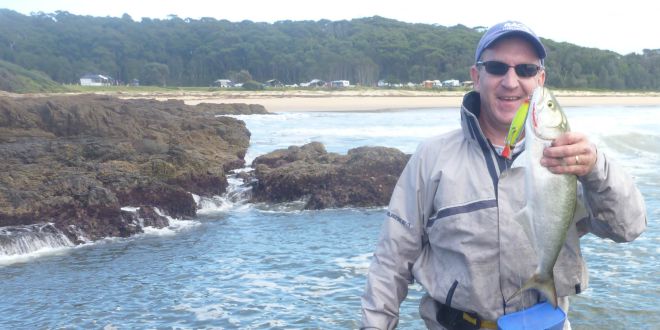 WINTER is tailor time and this past season has been a ripper. The great thing about these hard-fighting sportfish is they can be taken from the shore or a boat and they hit baits and lures willingly. To maximise your chances of success, you should be fishing around dawn and dusk, when you will have the bonus of experiencing the beautiful sunrises and sunsets that we fishos so often take for granted.

A few other little tips and tricks can improve your chances or simply give you the opportunity to experiment with new tactics and test your skills as an angler. Getting a feed is fine, but why not put the bait away after you have a couple of fish? You might be amazed by the pleasure you get from a lure-based capture.

The buzz I get from seeing a tailor smack a popper on the surface or hit a lure hard on the retrieve is hard to beat and should not be missed by any angler.

Let’s start in the estuaries or bays where tailor will move in on the high tide, particularly around the mouths. Some of the bigger estuaries will also have resident fish for a number of months of the year, and these can grow into monsters in places devoid of professional netters.

Unfortunately we don’t have too many of these places in Queensland (yet), but one day with good management we could see regular double digit (in the old pounds scale) captures like they see in some of the estuaries such as Wagonga Inlet in Narooma, NSW. The tried and true method to find fish is to look for bird action; that is, terns diving and smashing schools of bait from above, which normally means toothy critters have chased them to the surface from below.

Another method for finding tailor (if there is no bird action) is to motor slowly around estuary entrances and deep holes, paying careful attention to your sounder. This is where side or structure-scan sounder technology offers huge benefits. You can work in a grid pattern to find fish not only directly below you, but off to the sides as well. You are looking for schools of bait and ideally bigger fish with them.

The technique
Once you find the bait schools you have a few options: bait, metals, or hard-bodies. I like to throw over two deep-diving lures and troll around the edge of the school (not the middle or you will spook the fish).

My choice of lure depends on the depth I am fishing. You can determine the depth where the fish are sitting with a quality sounder, but don’t despair if you don’t have one because a good place to start is to troll one 10’ and one 20’ bibbed lure.

The other great thing about tailor is they aren’t too fussy (most of the time) about lure choice and I’ve had success on $4 specials from bargain bins. Just ensure the lure dives to your required depth.

When trolling for tailor, I like to use 10lb braid and a 2.5m length of roughly 30lb fluorocarbon leader, unless the fish are monsters, in which case I’ll go up to 60lb, but I will never use wire because I feel


it impedes the lure’s action. The braid helps to get your lure down deeper and bumps on the line from weed or a fish are better transferred to the rod without the stretch of mono. Medium to fast-action rods of about 7’ are perfect for this technique.

Once I find the fish and hook up, I like to then cut the motor and either cast and retrieve the same lures, or more commonly change to pre-rigged graphite rods with 15-30g metals. Raiders, Halco Twisties, blades and the increasingly popular jigs such as the Eupro Tamban, Engulf lures and Japanese models have all worked well.

Determine the depth the fish are sitting at if you have a quality sounder, otherwise use the countdown technique and drop your lure to various depths before retrieving to determine where the fish are holding.

Take your choice of lure, mix it up, experiment and even go back to the future for some fun and try to catch tailor on an old Wonder Wobbler – yes they still work!

Remember, angling can be an art form, so don’t stick to the same old, same old. Get out there and test your skill. If bait is your preferred choice, throw out an unweighted ganged pilchard using Tru-Turn pre-ganged hooks that make rigging a breeze with swivels in between the hooks.

The rocks
Of course, the number-one rule before you begin rock fishing is safety. I might not be here if I had not read a fishing article about rock safety the night before I had a terrifying experience on the rocks at Bingie, NSW.

I got caught out in an unfamiliar location, on my own (breaking a key rock safety rule), and was just fingertips away from being washed over a steep ledge into a very strong sweep and swell. I’ll never forget the slurping sound of the monster wave drawing back the water from the rock’s edge and then coming straight towards me.

Amazingly, the story I’d read the night before came into my head. I instantly dropped my rod, gear and everything and gripped the rocks with all my fingers and the toes of my rock sandals. The wave smashed over the top of me and knocked out my legs and one arm. I managed to cling on as I felt the fierce pull of the water back to the ocean, with only four fingers holding on for dear life. As the wave retreated, I rolled backwards, losing a bit of gear, my dignity and incurring a few cuts and scratches, but I was alive. I’ve never taken shortcuts on the rocks since. So watch the waves, fish with a mate and definitely wear an inflatable life jacket.

Bait fishing the rocks
Back to the fishing; my preferred time to fish the rocks is just before dawn. This will see you fishing one of the peak hunting times for tailor. It also means you will have enough light to see around the rocks for the majority of your session.

Be aware that most rock ledges have either underwater rock or kelp near the edge, so if you use too much sinker weight you will be rigging and re-rigging over and over.

A simple way to avoid this is to run a very small 0 ball sinker down to the gang of hooks. This will give you sufficient weight to cast and commence a slow retrieve back through the water (which the tailor will love) without getting caught up on the bottom.

Just make sure you speed up the retrieve as you approach the ledge if there is a bit of kelp there.

Lure fishing the rocks
Many rock locations give you access to deep water in close, which is perfect for tailor action on poppers.

Given you shouldn’t be on the rocks if the swell is too big, the ideal scenario is having just enough wave action to throw white water over the area you want to cast at. Too little swell and the fish might not hang around after dawn, if they were there at all.

All sorts of poppers exist, but make sure you get something weighing 30-50g to give you sufficient casting weight. Metals offer another option on the rocks, but be sure to retrieve quickly and lift the lure out well before the ledge.

Landing fish on the rocks
While most tailor you encounter from the rocks in Queensland and northern NSW will be under 2kg, bigger fish will require more care when landing.

As the fish approaches the ledge, ensure you use the action from the waves while lowering your rod to the horizontal and bringing the fish up on the rocks with a sideways sweep of the rod.

Tackle and equipment
Long surf rods of about 13’6” are ideal for the rocks, not only for distance casting but also for lifting the fish up and over the edge. Graphite rods can be much easier to use and give you a much more direct action with your popper or lure, but be careful when landing the fish because a direct lift from the water could snap the tip.

For this reason I prefer rugged fibreglass or at least composite rods. My preference is to support quality Aussie manufacturers in a very competitive market, so for bait fishing reels you can’t go past the Alvey 650BC or 650E series, which are perfect for handling brutes off the rocks. Platypus Platinum 20lb mono is my line of choice and I like to use an 80cm fluorocarbon stealth leader in 30lb connected to a swivel to avoid line twist. I then run a small 0-1 ball sinker down to the ganged hooks.

Make sure you prepare a couple of pre-rigged gangs around a piece of pool noodle or in individual sandwich size snap-lock bags with the gangs wrapped in alfoil to stop the rig getting tangled. Even the best efforts in your cast and retrieve technique can still see you losing a bit of gear, so it’s good practice to always have some rigs ready.

In terms of lures, all those mentioned above for the estuary are suitable, except maybe throw in a few larger 40-65g models to get long casts out. So give the rocks and estuaries a try for tailor in early spring and don’t be shy about trying new techniques and lures.

Next month, be sure to catch the run-down from our Ontour Fishing Australia 10-day Fraser Island trip (and follow us on Facebook). In the meantime, bag your mates, not your limit!

Sean caught the fishing bug bad one very cold Canberra day 20 years ago when he was bored and picked up and read Angler's Almanac by the fireplace. Since then he has filled his mind with knowledge from fishing magazines, books, the internet, TAFE fishing courses, guiding fishing charters (estuaries, beach, bay and mountain lakes) and of course 'on water' experience. He and a group of mates formed a social fishing club and soon started to share what they learnt and caught online. Sean is the admin for Ontour Fishing Australia on Facebook, which is a page that shares information, reports and sponsor giveaways and welcomes all to the site. He plans to move into blogging on his new website when time allows.
Previous Tin Can Bay creeks get a much needed flush out
Next Bar Crusher 575C review