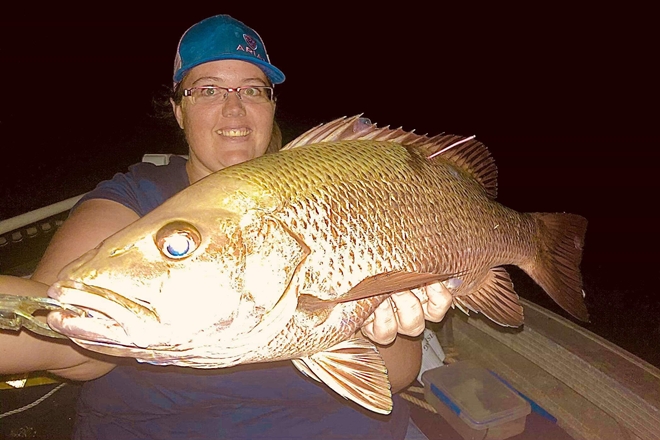 Take advantage of small window this weekend at Bundy

Firstly, how good is it to be living in this part of the world?  We have so many options at our doorstep which all are fishing well.  At this stage, it’s looking like the northerly wind which is predicted will make things a little lumpy out wide.

With a bit of luck there may be a small window both Saturday and Sunday morning to slip out to the inshore reefs before the wind picks up.  Plenty of mackerel and mac tuna have been active on all the popular marks whereas closer to the bottom; plenty of nice grunter and the odd squire have been responding well to soft plastics, vibes and baits.

The Burnett River has been a little hot and cold lately.  There has been some really nice mangrove jack caught recently in all parts of the river from Splitters Creek, Austoft Rocks, Tallon Bridge, Kirby’s and North Wall.

Some big flathead have been hanging around the base of these rock walls and have been a sucker to a 4” to 5” soft plastic.  Along the gravel beds there has been a lot of small grunter, but the green sea toads are also there in good numbers.

A few quality mud crabs were caught in the Burnett during this past week so that may be another option for this weekend.

The Kolan River has also fished reasonably well now the water temperature is up around 25-26 degrees.  Species such as mangrove jack seem to be smashing most presentations such as soft or hard body lures.  Live baits as well as strip baits of mullet fillet have all been effective on jacks; some of which have been over 50cm and very challenging to land.

The annual Cania Fishing Classic was held last weekend with 395 senior and junior nominations and by all reports it was a huge success with heaps of Australian bass, golden perch, jew and saratoga being caught.  The Cania Dam Fishing Stocking Association did a fantastic job and that’s why Cania is one of my favourite destinations.  All funds raised goes into restocking the dam and running the fishing competition.

I believe Lake Monduran is fishing as good as any barra impoundment in Queensland.  The barra are very well conditioned and averaging between 70-90cm.    Most anglers are being rewarded with little effort with some anglers getting up to 10 hookups per session!  Jackall Squirrels, Lucky Craft Pointers and 4.8” Jackall Rhythm Waves all working a treat.