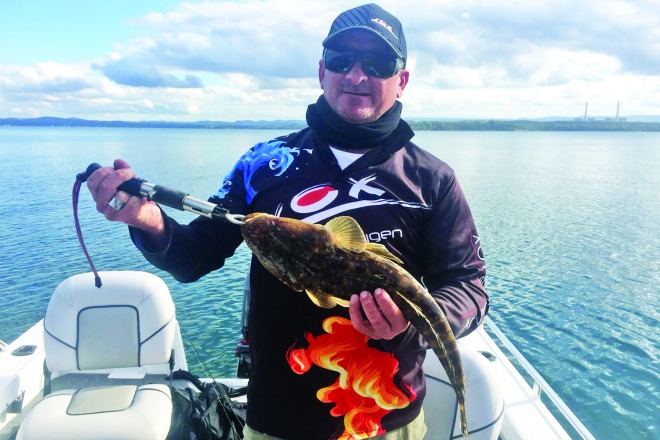 The author was happy with this flathead.

THE fishing in Lake Macquarie was a hoot after the wind eased.

It was hard going while the wind was blowing because every spot we went to saw the wind changing direction and slamming us in the face. But as the wind slowly died down we had some really good days.

Good mate Andrew Partridge called me one night and said the conditions would be great the following day, so I should pack my bream and flathead gear and we’d get into them. He knows excellent spots for targeting these fish around the lake, so I knew I was in good hands.

We wanted to target bream first, so Andrew took me past Pulbah Island and into a weedy sheltered area where these fish apparently like to hang out. And wouldn’t you know, Andrew’s first cast landed on the head of a bream.

Andrew was using very light gear with a Z-Man 2” GrubZ and after a few good runs the fish was in the net. The sun had been up for no more than five minutes and we’d already caught a 45cm fish, so I felt it was going to be a great day.

We were spotting fish everywhere on the sounder and after a couple more minutes my bream gear was hit. It wasn’t the fish I’d intended to hook but the by-catch didn’t bother me as a tasty treat of 65cm flathead slid into the net.

After putting my flathead in the Esky, Andrew yelled at me to grab my other rod and tie on a metal slug pronto. Just 20m away, birds were diving and the water was boiling with tailor.

Andrews first cast landed smack in the middle of the hungry pack and in no time his rod was bent and reel screaming. They weren’t really big fish at about 40cm in length but they were the perfect size for the barbecue plate and heaps of fun. Soon the tailor disappeared and the excitement drifted away, but we knew they would be back. The only question was where.

We changed tack and headed to a spot that holds a mixed bag of fish including plate size snapper, tailor and bream.  Several hours at this spot dealing with loads of boat traffic was enough to make us scream.  We could only get small fish and it was starting to get frustrating, so again, off we went to find where the fish were hiding.

It turned out to be hit and miss. While great fishing spots abound in Lake Macquarie, with so many boats and other watercraft present we decided to get away from all the traffic and hit the shallows on a rising tide for the rest of the afternoon.

Andrew put us on the spot to land great flathead and finish the day on a high. We were fishing a rocky point and drifting past weed beds that on the sounder appeared to hold big fish. In no time, Andrew was slammed by a big girl. Just before he got her to the boat I blew the net shot and she busted off.

The look on his face was priceless. I’ve had no phone calls or fishing invitations from Andrew since. I’m starting to wonder if my poor netting has lost my spot on his boat… sorry mate.

Anyway, we had a window of two hours at this flathead spot and the action was full-on for most of that time and loads of fun. We landed a few and lost a few because we were only using light gear, but what a hoot of a day and one to remember for a long time. Thanks Andrew for teaching me how to use my baitcaster and for a fantastic day on the water.


For flathead, large (100-150mm) silver and black plastics that resemble mullet or even white plastics with some orange on the gills are a good choice.

If targeting bream, 2” Gulp Shrimp in Pepper Prawn are fantastic. Your large plastics might even land you a good size jew, so cast until your shoulders hurt and good luck.

One recent afternoon I took my daughter and a few friends for a fish behind the Orica plant using bait. We were after whiting but they didn’t show. After catching loads of little tailor, flathead turned up for a bit and ate our whitebait and prawns.

Give this area a shot if you’re looking for a feed. The rising tide produced for us, so get your tides right and good luck.

‘Til next time, stay safe on the water.