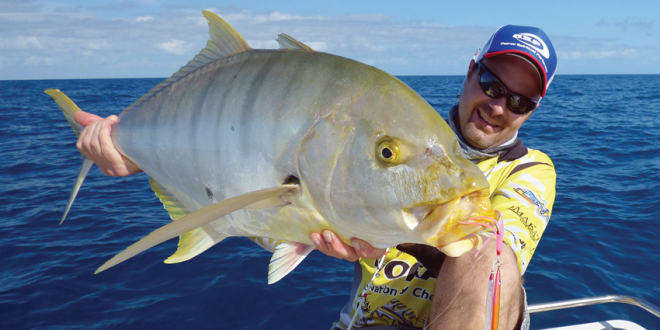 This big golden trevally took a liking to a 60g Maria jig with some Panic Baits added to the assists.

Techniques for some new lures

I WILL run through a number of new lures to the market and give you a few pointers on how best to use them.
Z-Man CrusteaZ
Z-Man CrusteaZ soft plastics replicate some of the small crustaceans that inhabit our waters, which can be a big part of the diets of several species.

Fish such as bream seem to respond very well to these types of lures and I’m sure the staff at Z-Man Lures Australia had them in mind, however they have accounted for a lot of different species in the salt as well as the fresh. The two small arms coming out the back of the lure have a very subtle curl that requires very little movement to get them working. These arms can even work while sitting motionless on the bottom if there is some tidal flow.

For this reason, these lures are probably best retrieved slowly as the lure works with minimal movement and the species these lures are replicating move slowly as well. The replicated species spend most of their time in the bottom column of water, so this is probably the best place to fish these plastics. As with all Z-Man plastics, CrusteaZ are made from 10X tough soft plastic material that makes them last a lot longer than most other soft plastics on the market.

Maria Fla-Pen
The new Maria Fla-Pen is a sinking stickbait with a difference. It has a hinged plastic flap on its rear, which allows it to swing forwards on the cast and backwards when being retrieved. At 85mm and 15g Fla-Pens cast very well, partly thanks to the flap swinging forward and not creating drag through the air.

While being retrieved, the flap swings back and gives the lure more side-to-side wobble than most other lures available today.
Rigorous testing was done for this design in order to emulate the action and vibration given off by a swimming fish.
The strength of the lure was also thoroughly tested because many anglers could be concerned about the strength of a lure with hinged plastic elements designed for larger fish. Given that the lure only really works when being constantly retrieved, it makes sense that anglers should target fish in the top column of water.

It is designed for seabass and other species in Japan but is certainly effective on a number of species here. Almost any species that will take a baitfish of similar size to the Fla-Pen is a possibility, and tuna, jew and mangrove jack are some of those already caught on this innovative lure.

Imakatsu Scarebrow Seven
The Imakatsu Scarebrow Seven is a middle-depth running crankbait designed for heavily pressured waters in Japan and their beloved bass. What sets this lure apart from similar crankbaits is the addition of a small willow blade between the bib and front treble. This blade spins with the aid of a swivel incorporated into the bib and sends out flash and vibration that helps entice a bite. The blade will also force the lure to vary its normal swimming pattern, making for random directional changes that can excite fish into striking.

These lures are 48mm long, weigh 8.8g and dive to 2m or so on the cast, which makes them great for searching over flats. Weed beds and timbered zones are good places to cast the Scarebrow Seven because it will cover large areas quickly. Australian bass and other freshwater natives will no doubt be the main target species for these lures, however saltwater species such as flathead and mangrove jack could also be targeted.

Revamped Bassman 4×4 Spinnerbait
Bassman Spinnerbaits is an Australian business that designs and makes all its lures here in Australia, specifically for our native species. Knowing their target species, the staff have recently improved the design of the 4×4 Spinnerbait. This lure now has three armatures instead of two, with four Colorado blades on two of the arms and one with a skirt.

The reason for the extra arm is increased vibration and flash, which can help get the attention of the target species; commonly the mighty Murray cod. These fish are the kings of their domain and sometimes bigger is better when targeting them because they are scared of nothing.
Spinnerbaits are fairly versatile, relatively snag resistant and can be fished in any part of the water column. Due to the increased number and size of the blades, resistance will hold the revamped 4×4 up in the water, so slowing the retrieve speed or increasing the weight of the lure will help keep these spinnerbaits at the desired depth.

Maria Yamashita Panic Bait
Colourful Maria Yamashita Panic Bait soft plastic skirts can be used as lures themselves but I see them as an addition to a lure. Putting Panic Baits on the assists of metal jigs can really entice a bite from fish as they give a different element of action to the lure. Assists are not usually the focus of a fish’s attention when it strikes a jig, but when adding these skirts the fish can bite directly where the hooks are, thus improving the hook-up rate.

The skirts increase the erratic action of the jigs as the two elements move together. Jigs can be fished a little differently as well because small movements with the rod will get the skirts moving even when the jig is not. The Panic Baits come in a couple of different sizes and colours, a number of which glow in the dark. The different sizes will cater for small 20g jigs through to some of the larger jigs on the market.

Peter Herbst has 30 years of fishing experience around SE QLD. Everything from whiting to marlin has been a target at some stage but these days Peter enjoys nothing more than casting lures.
Previous Steamed syrup pudding
Next Current dictating offshore options 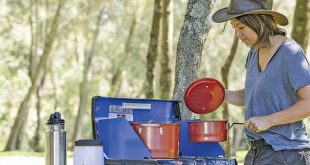