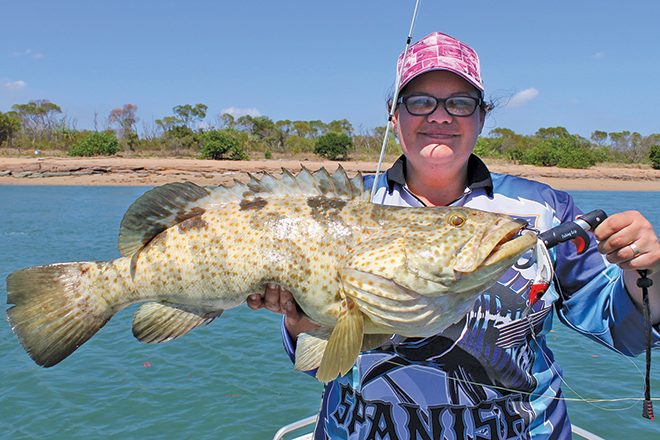 Cassie’s ripper goldspotted cod shows why fishing the tropics is worth the trip and why heavy gear is recommended.

The lure of tropical estuaries

FISHING in much of tropical Queensland is far from the first thing that comes to mind at the moment.

Some areas escaped damaging floods and these will bounce back quickly, as they do after each significant wet season. Several years ago we had a trip to the tropics planned many months in advance of cyclone Yasi striking, yet went ahead with that visit just a month afterwards. Thinking that we would be spending our time helping with the clean-up, we were surprised to find the debris had already been removed and life was returning to normal.

Our fishing trip went ahead with excellent results on most of our usual tropical estuarine targets. Many of the species most commonly caught in the estuaries of the far north are found in southern Queensland waters, just in fewer numbers. Anglers will encounter fewer bream, whiting and flathead, more cod, jacks and trevally.

Throw into the mix javelin fish, barracuda, queenfish, two species of threadfin salmon, grey mackerel, tarpon and of course the icon of the north, barramundi, and you can see why fishers would be drawn to tropical waters. One of the common mistakes made by first-time visitors to the far north is in the choice of lure size, imagining XL sized offerings are required.

The majority of species listed will prey upon relatively small food items, with prawns favoured by most when in season. Bibbed lures of about 90mm are perfect for most estuarine predators, whether casting or trolling. It’s no secret that I use Aussie-owned and designed lures exclusively, which is no handicap at all when selecting suitable options for the tropics.

The first lure I clip on during northern trips is the Predatek Spoonbill, an 85mm lure that gets down to about 5m on the troll, is tooth-proof and as close to unbreakable as you’ll find. Of the myriad colours available, I don’t leave home without (not in order of preference): Barra Blue, Kakadu Tiger, McSea, Redhead, Pink Thing and Fireball Red.

On the odd occasion the weather is calm and we see activity beyond the mouth of the estuary, we will duck out and use the same lures to troll for pelagics, regularly landing longtail tuna and various mackerel species. When casting soft plastics, I stick to a similar size, around 100mm, rigged on a head wearing a strong hook from 2/0 to 4/0.

Keeping things simple, I usually opt for something like a Bozos Lures pre-rigged 100mm mullet, saving the need to carry separate jig heads. As far as tackle goes, it pays to go ‘loaded for bear’ for those unpredictable occasions when a toothy monster is encountered. Larger than average mangrove jack and estuary cod are tough, dirty fighters that will make you glad of extra rod and line strength.

Leaders are particularly important in barnacle and oyster-strewn estuaries as they take the brunt of the rough and tumble. After using all manner of leader material from several manufacturers, I now tend to rely on either Platypus Super 100 or more recently, Schneider Braid Compatible Leader, in breaking strains from 12-20kg, depending on the territory I’m fishing.

Narrowing down areas worth attention within an estuary system depends on your target species. Hard structure in the form of rocks, snags or undercut banks are the go-to spots if you are looking for jacks and/or estuary cod. Those same habitats will of course also hold barramundi in systems where they occur, sometimes outnumbering the aforementioned species (if you are very lucky).

Trolling along man-made rock walls can be just as productive as fishing natural formations. Don’t limit your efforts to only obvious structure. Finding fully submerged rock bars and logs with your sounder can put you onto hot spots overlooked by many other anglers. All snags are not created equal.

Those adjacent to a drop-off or channel junction will often be more productive than those along an otherwise featureless stretch of shore. One particularly memorable session on a creek at Hinchinbrook Island occurred when we stumbled across a large, fully submerged snag in a deep hole at a three-way junction.

That snag had barra stacked in its branches, all eager to take a deep-diving lure retrieved within striking distance. In the absence of hard structure, good fishing can be had by concentrating on areas where water flows over sandbanks into deeper channels. Some species prefer feeding in this open water, with queenfish, trevally and tarpon commonly encountered, along with barracuda and grey mackerel at times.

Lures that throw flash will often account for good captures of these open-water feeders, especially when the water is clear. Making tides tend to be more productive for these mobile feeding predators and you may even need to follow the tide upstream to maintain contact with them.

I’ll be waiting until late winter for a return visit to the tropics, but good fishing can be had year-round.