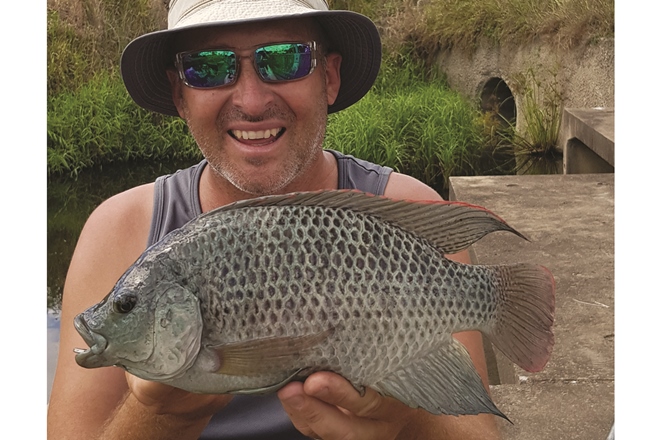 Even the author had time to catch one.

EVER since I can remember going fishing as a youngster, tilapia were a regular catch from Oxley Creek and North Pine Dam.

Unfortunately, tilapia have rapidly spread in the past decade and seem to have infested almost every waterway. I live near Oxley in the western suburbs and while riding bikes with the kids have observed the populations of tilapia in the creeks and ponds as we ride along their fringes. My youngest loves fishing and was keen to go and catch a few.

Sadly, Brisbane City Council by-laws forbid fishing in lakes and ponds within parks and recreation reserves. Fortunately, the rules allow you to fish watercourses (meaning creeks and rivers). Most neighbouring councils also share similar rules and can be found by using your local library resources.

Phoning a council call centre will get you a different answer every time you speak to a new person, so to avoid running afoul of the rangers, you’re best to check the rules yourself. I will add that the list of prohibited activities in parks includes golf, motorbiking, camping and more. A white sign will list other activities prohibited in that specific location, and occasionally fishing may be one.

Impatience in kids is a real impediment to fishing, so we choose our spots based on visual confirmation active fish are present. Smaller fish tend to swim around in schools aggressively attacking any bait thrown in their direction. The bigger fish often sit in the shallows and are harder to trick into being caught. Since the wet weather in recent times, many long-dry drains and creeks are flowing again and the tilapia have moved back into them and are quite active, so you’ll see plenty of movement under the surface.

I make a dough out of some tuna oil and old bread that is just firm enough to mould over a small hook. This can be dropped straight off a bridge to a school of tilapia that will hang around with minimal use of berley. Kids are perfectly happy catching small fish one after another. Being a pest species, filling a bucket with as many as you can catch cannot be a bad thing.

The bigger fish are smarter and require a bit more stealth and skill to catch. The method that works best for me is a long rod with a small hook and worm. I cast it just near the fish basking in the shallow water and let the worm sink to the bottom. If the fish hasn’t noticed it, I twitch the bait a little to get its attention.

These fish will often just watch the bait for a long while, but eventually the wriggling worm will prove too tempting and the fish will pick it up and hold it in its mouth. Trial and error has taught me that if you strike at this point, you pull the bait straight out of the fish’s mouth. They are the slowest eaters I’ve encountered, so be sure to keep waiting.

If the fish turns away from you with the bait in its mouth, you have a good chance of getting the hook to connect by lifting the rod tip. The setup of our rigs is designed to be as stealthy as possible and I have found 6lb line to be the best. Lighter line than 6lb doesn’t have enough abrasion resistance to fight bigger fish and heavier lines spook them.

Use tiny hooks for small fish and size 8 hooks for sight casting bigger ones. Because we avoid using floats and sinkers, Alvey sidecast reels and longer rods are our choice for the creeks. Spin gear works fine too, but the little guy gets better distance with the bigger rod.

The longer rod also helps with casting over fences, long grass and so on. A net with a long handle is handy because the little hooks may not survive an attempt to winch a fish straight up. Brisbane has a whole lot of reserves along creeks that are infested with tilapia and carp.

Kedron Brook, Ithaca Creek and Zillman Waterholes on the northside are worth checking out. Bulimba and Tingalpa creeks to the southeast have been productive lately too. The best time to have a go is from the middle of the day to late afternoon.

This makes a quick fish after school or work quite possible because you probably have to drive or walk right past the fishing spot on your way home. Please remember that tilapia are a declared pest and must not be returned to the water, kept or left on the bank.

Bag up any catches and bin them as soon as you are done.

Tom lives in Brisbane and predominantly fishes from his small fleet of kayaks. He enjoys hitting rivers and creeks chasing bass and cod as well as heading offshore to catch snapper when conditions suit. In 2015 he will be spending more time getting his two young boys into camping and fishing.
Previous Burnett River the place to be at Bundaberg
Next Water temps start to drop on Sunshine Coast