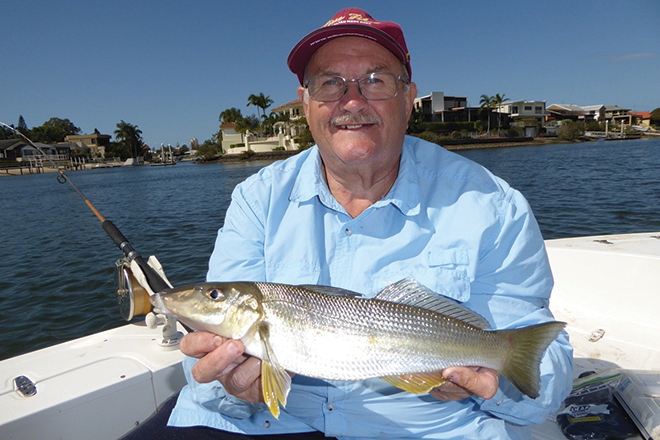 Fresh bloodworms were the bait used by Pete to catch this 40cm whiting.

IF you’re a summer whiting fisho like me, Christmas comes early, with this month as good as it gets.

Tips for big summer whiting: No more travelling miles up the Nerang River to find fish because they are on the move downstream to spawn. This means fishing the area between Sundale Bridge and Isle of Capri will get you a feed of these great fish. After feeding well during winter, the summer whiting are in great condition and a few were caught in the lead-up to the full and new moons in September in this downstream area.

It is this month and next that will see the big girls come out to play, and these 40cm-plus fish are the holy grail of whiting fishing. If you’re new to whiting fishing or have never been to the Nerang River, here is all the information you need to consistently catch fish. The Nerang River is a little different to most because the majority of sandbanks in the river are not exposed at low tide, though there are many of them.

These sandbanks will be 0.5-1m under water at low tide and drop into 2-3m of water. Fishing on top of the banks at high tide and the edges as the tide drops will give you some great fishing. To save searching the river with your sounder, fishing the area around the channel markers is a great place to start, especially if you’re new to the river.

The Nerang River is an exceptional place to fish for summer whiting because all its old-style sand canals built in the ‘60s are full of canal wriggler worms and jelly prawns which provide the fish with plenty of food. In addition there is no commercial fishing pressure, which means more fish for those willing to spend the time in the area to gain a bit of local knowledge.

Most whiting fishos will have heard of the Council Chambers because this is the most popular fishing spot in the river. It does fish well at times but plenty of other spots provide good fishing.

The area on the southern side of Sundale Bridge can fish well on the run-in tide and the eastern side of Chevron Island between Budds Beach and the green beacon just to the north is quite productive.

The western side of Chevron Island also produces, particularly from the green beacon up to where the small canal comes in on the left as you’re heading upstream. Within 100m of both red and green beacons at the Chambers is worth a try, as is the area upstream from the Chambers where the power lines cross the river. Once past Isle of Capri Bridge, anywhere on the right-hand side of the bend up to the red buoy where the Monaco St canal enters the main river can fish well.

The gear needed for summer whiting fishing is very simple. A light, soft-tipped rod of between 7’ and 10’6” is ideal. Two of the best are the Snyder Glas 10’6” Crusoe Island and the 9’ Gary Howard. Spinning reels are popular to pair with smaller rods but I prefer 5” Alvey reels with no drag on the larger rods.

The Alveys make it easy to feed line back to the fish when they are feeding a bit cautiously, which can help them take the bait without feeling any resistance. The preferred setup consists of 6lb line with a 3 or 4 ball sinker depending on current flow, 1.5-2m of trace and a size 4 short-shank hook. Using fluorocarbon line for your trace can be a big help for the larger, more cautious fish.

The best baits, in order of preference, would be bloodworms, canal wriggler worms, yabbies and sand worms. Boat setup is very important to a good catch rate, and having a second anchor is vital if it’s windy or you’re fishing in heavy boat traffic. Dropping your front anchor and allowing an extra 5m of rope to go out, then dropping the back anchor and pulling in that extra 5m on the front until the back anchor is tight will keep the boat nice and still.

This makes it easier for the whiting to feed on your bait and your catch rate will improve immensely. When fishing at night, good lighting on your boat is essential to catching fish consistently. Apart from the navigation and anchoring lights required by law, having a decent light at the back of the boat that shines on your rod tips and not in your eyes is essential for seeing bites.

Because there is a lot of food for summer whiting in the Nerang River the fish don’t feed aggressively. Usually the first indication of a bite is a small shudder or vibration of the rod tip. This is why we use rods with very soft tips. A couple of seconds later, the tip will shudder again as the whiting crushes the bait before swallowing it.

Once it’s swallowed, the rod will bend and you should pick it up to set the hook. My mates and I use at least two rods each and these rods are never held, rather a very close eye is kept on the rod tips to pick up the slightest indication of a bite. An early evening trip is best at this time of year. We normally start at 5-6pm and are back at the boat ramp by about 10pm.

The run-in and run-out tides are both productive, however the fishing slows down around the change of tide. Whiting fishing has been performed this way in the Nerang since the 1960s and works extremely well. With a little practice you will find it works just as well for you. The legal size for whiting is 23cm (it should be at least 25cm) with a bag limit of 30 per person (it should be 20).

I don’t see any reason why two fishos would feel the need to keep 60 whiting and still expect to be seen as fishing responsibly. Other species worth chasing this month will be flathead from the Seaway up to the southern mouth of the Coomera River and snapper offshore, however not as many snapper are around now as early in the season. 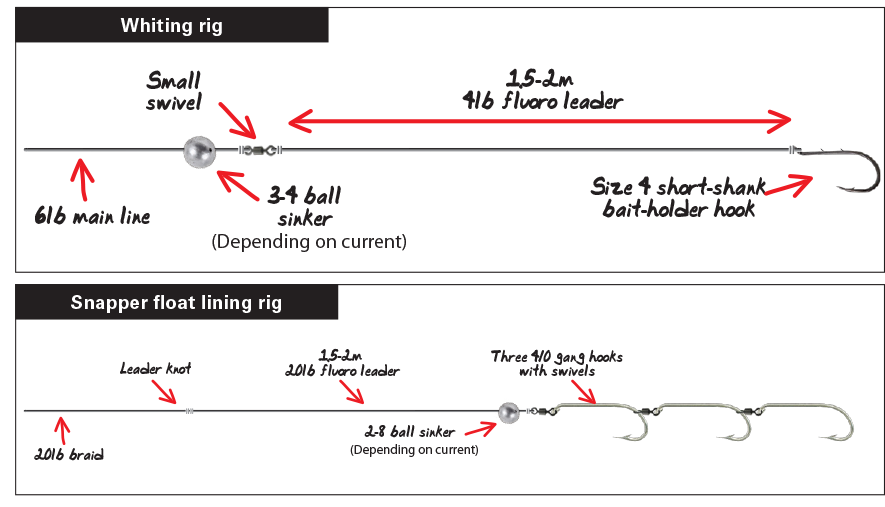 Wayne started fishing seriously 22 years ago, and 19 years ago moved to the Broadwater region on the Gold Coast because it had the best and biggest whiting in southeast Queensland, which is still true to this day. He works most Saturdays at Oxenford BCF and spends almost all the rest of his time fishing and crabbing the Broadwater and the rivers that run into it. Since moving there he has discovered that despite a lot of boat traffic it is still a great place to fish, with an amazing variety of species to catch.
Previous Wilson Mystique Combos
Next Chasing barramundi in the Great Sandy Strait