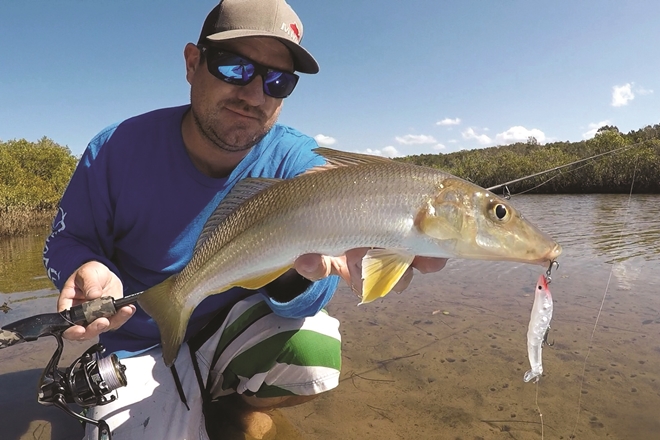 Mick Molnar, the owner and designer of the MMD Splash Prawn with a nice whiting on the new Ghost colour.

G’DAY everyone, in this month’s article I will chat about a technique that although has been around a fairly long time, still holds mystery: catching whiting on surface lures.

The main reason the whole concept of whiting on surface holds some mystery and disbelief is us older anglers were taught that whiting are only bottom feeders. This is basically correct in most cases, but with some wizardry in choosing the correct lures, locations and technique, they will readily rise and repetitively smash a surface lure.

The concept of whiting on surface was discovered by using small standard cup-faced poppers and they still work well, but in recent years the first choice of lures has been stickbaits. Through trial and error I have found Bassday Sugapen and MMD Splash Prawn lures the way to go for the best results.

Choosing the correct areas to succeed with this technique is of utmost importance with the main thing to be looking for being very shallow water as I have found that they won’t rise in water that is over a metre in depth. Preferably my favourite depth is between 100mm and 500mm.

The shallows or flats as they are known should also hold the correct feeding environment for the whiting for example yabby holes, the edges of sea grass beds or in some spots shell grit. The good thing about finding these areas which are in most rivers is that the land-based anglers can even find spots without the need for a boat or kayak.

The best technique for getting the fish to rise is commonly known as walking the dog, which involves casting out and retrieving the lure with your rod tip held reasonably low while incorporating a small left to right twitch of the rod tip. This technique makes the move in a smooth and continuous motion that makes the lure spit water from the face of it at the same time, which imitates a fleeing terrified prawn.

The technique in its purity does take a degree of co-ordination, which comes quickly for some anglers, but others might struggle at first and pick it up with practice. When I have a client on my boat who might have a bit of trouble, I always tell them to loosen their grip of the rod, relax and try not to overthink and it will happen.

It is also important when the whiting start to follow and attack the lure on the surface that you keep your composure and keep the lure coming with the same speed and action. If you strike, you will pull the lure away, or if you stop they will often go straight back to the bottom. The exciting thing about this technique is when it’s done right they will pursue the lure right up to a rod length away from you, which is a visual rush.

A couple of other tips might help you with success: the water must be reasonably clear so they can see the lure. It also helps if there is a bit of wind that will break up the surface tension of the water. I think the slight break in surface tension helps to hide the lure and mask its true identity.

Thanks and I will talk again next month.

Smithy has been working as a full-time professional fishing guide for over 20 years, which makes him southeast Queensland’s and northern NSW’s longest-serving guide. Above all the commitments Smithy has in the charter industry, his overriding passion has always been to pass on his specialist experience to anglers and teach people of all ages and angling abilities the correct techniques required to catch all the Gold Coast’s estuary species on a variety of different lures. Smithy’s unique charter operations guarantees you will catch fish on lures or you don’t pay.
Previous Sharp increase in whale shark injuries due to boat encounters
Next Good fishing lures make all the difference