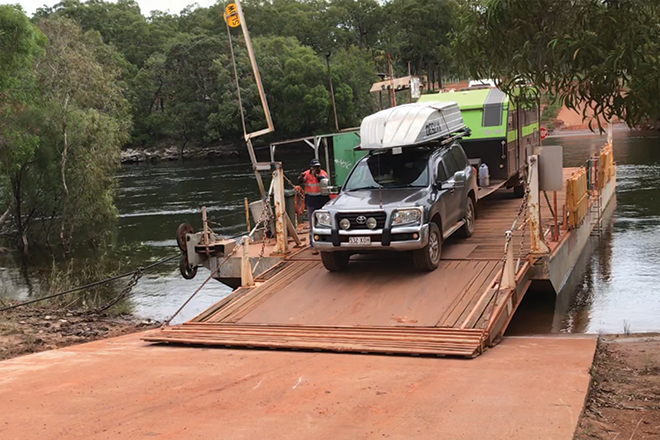 Towing the van to the tip of Cape York

WHAT an amazing month we’ve had.

This month we travelled to the tip of Cape York the most northern point of the Australian continent.

When you hear people talk about the Cape, a lot of discussion revolves around the four-wheel-driving opportunities on the famous Telegraph Track and Gunshot, which is just a crazy vertical drop into a creek.
Though the Tele Track is an amazing 4WD track, the Cape has many other things to offer, and using the Peninsula Development Rd you can access a lot of these areas with a pretty standard 4WD.

It also allowed us to tow our off-road caravan with tinnie on top of the LandCruiser, with just the odd corrugation and washout along the way. What I am trying to say is don’t let the reputation of the Tele Track deter you from coming up and seeing one of my favourite places in Australia.

As you are heading up to the Cape you will pass many national parks such as Lakefield and Bathurst Head.
Some of the places that really stuck in our minds were Eliot Falls, Fruit Bat Falls and Twin Falls. These are fantastic swimming holes about 50km south of the Jardine River.

You can camp at the national park campgrounds adjacent to Eliot and Twin falls, but no camping is offered at Fruit Bat Falls. You still need to be very self-sufficient, with only long-drop toilet amenities.
These falls really are little oases because by this stage of the trip you really do have red dirt in all the nooks and crannies.

It is wonderful to enjoy a nice cool swim and just take in the sheer beauty. We ended up spending a couple of days around the falls, just chilling out and really enjoying life. To get up to the very tip you have to cross the Jardine River by ferry, which costs $130 return and seems a little steep considering the river is only about 50m wide, but this fee also provides you with a permit to access traditionally owned land and designated free camping areas.

I must say, some of the scenery where you can camp directly on the beach overlooking the water is pretty amazing. But again, you must be fully self-contained in these areas because there are no amenities. While we were up the top, we decided to stay at Alau Beach Campgrounds.

This was a great decision because it was very central to many of the locations at the tip and we used it as a for day trips and sightseeing. Alau (Umagico) is one of the first places you come into heading towards Bamaga.

The park was very clean and the staff helpful and friendly. They had just installed a new swimming pool and were waiting for council approval before guests could enjoy it. Lots of friendly dogs were floating around, which might sound a bit off-putting but we are dog people so enjoyed it.

The dogs were very friendly and guarded our caravan and gear at night like we were their new adopted family. Not only do you wake to amazing ocean views, but we also arose one morning to about 10 wild brumbies walking around our campsite.

With our daughter being a horse nut, she loved seeing a newly born foal learning to walk and run and literally just finding its feet for the first time. It was very cool! From Alau, we did a little fishing trip from Inginoo around to Mutee Head.

We micro jigged and caught a heap of little trevally and queenfish as well as hooking better fish that I presume were larger fingermark and black jewfish. Unfortunately the sharks became quite fierce, so we decided to move on and have a flick up the Jardine River where we caught barras and a nice mangrove jack for dinner.

I hooked a few saratoga but unfortunately the Houdinis all managed to throw the hooks! We also went out to Punsand Bay Resort for pizza night (Wednesday) and the pizzas were really yummy. A beer to wash them down and a swim in the cold pool overlooking the water was a fantastic way to spend an evening.

We made a trip out to the very tip and on the way you pass a tent setup called The Croc Tent, which sells great Cape York merchandise. We wanted some Cape York shirts to remind us of the trip and to wear in the obligatory tip photo.

The tent has a wide range of merchandise to celebrate the moment you made it to the tip. When you get to the carpark at the tip you immediately start walking up a rocky hill. Once at the top you begin walking out towards the headland and the tip.

Once you get to the northern tip, you’ll find the famous sign where you can get a photo. Believe it or not, when we were there we had the whole place to ourselves, so I had to set the iPhone up on a rock with a timer to take a photo of us all.

A great place to check out after 5pm on a Sunday is Loyalty Beach where you get two good size pieces of fish and chips for $15. You can sit watching the sunset over the water with a nice cold beer. The place has such a laid-back atmosphere you’d think you were in Fiji or somewhere like that.

We are home schooling the kids and lots of wartime plane wrecks are scattered around the Cape, so it was great to spend a day driving around and checking them out to do some hands-on history. I managed to get in another fish by myself in the Jackey Jackey system, having a great session on the last of the run-out catching nice barra and tarpon.

As I had been to the Cape before with the lads (detailed in a previous BNB article), going with the family had a completely different and I must say much more relaxed feel. We really enjoyed the time swimming in the waterfalls, the wartime history, meeting people, seeing the most northern point of the continent and just getting to immerse ourselves in the whole experience.

It was such an amazing holiday! Even though people talk about Cape York, the hardcore fishing and 4WDing on offer, and the region being one of our last frontiers, it is still very accessible with a reasonably standard 4WD, off-road caravan and tinnie on top.

Take your time and take in all the other things the Cape has to offer. Don’t get me wrong, we still did a bit of hardcore fishing and 4WDing, and driving out over the Five Beaches Track at Somerset for the day and 4WDing into some of the waterfalls just added to the experience.

Don’t be scared off – get up there and have a look.