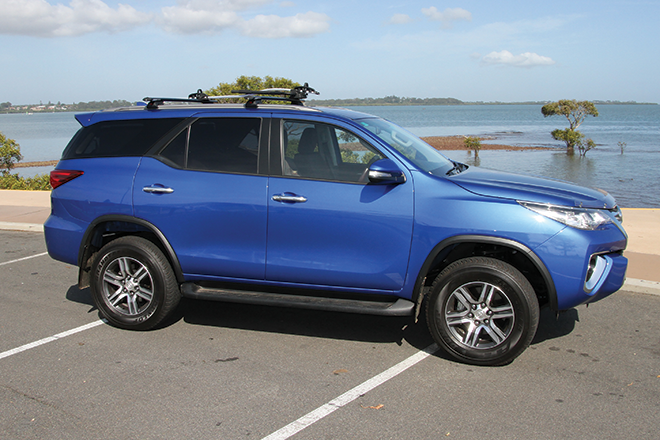 COLLOQUIALLY known as soccer mum cars, in recent years SUV sales have boomed to make the segment one of the most popular in Australia today.

In order not to miss out on increasing sales in this area, most manufacturers have one or more SUVs in their line-up. At first glance you would think Toyota had the market well and truly covered with its RAV4 (which now comes in a diesel), Kluger and Prado.

However, consumer demand, especially for diesel vehicles, meant Toyota found room for one more niche vehicle: the Toyota Fortuner. While not a direct replacement for the Kluger, the diesel-powered Fortuner sits between the very popular RAV4 and even more popular Prado. Currently manufactured in three models of GX, GXL and Crusade, Toyota has delivered a vehicle that is bred for adventure.

I was recently handed the keys (or more correctly the key fob) to a Toyota Fortuner GXL auto to put through its paces. As you can tell from the photos, the colour of the test car was Nebula Blue, which definitely stands out and fits with the adventurous nature of the car.

With six other colours to choose from in GXL and Crusade trim, you are certain to find one you like. In terms of performance, I generally go on about how responsive, comfortable, practical, and in this instance how much fun a car is to drive.

Like the HiLux I tested recently, the Fortuner featured ECO and PWR buttons so you could tune the engine to the traffic conditions or how you wanted to drive. Delivering 130kW of power at 3400rpm, the 2.8-litre double overhead cam turbo diesel engine had sufficient poke off the mark and when passing.

Combine this with an impressive 450Nm of torque, which is reached very early in the rev range at 1600rpm, and you have a vehicle that is suited to city driving as well as some open road touring and towing. In fact, the Fortuner is rated to tow 2800kg of gross braked trailer mass, which ticks a big box for versatility and makes it competitive against several larger vehicles in the market.

Unfortunately I didn’t get a chance to take this car off-road but managed a mix of city and highway driving. Overall, the 2.8-litre diesel pushed the Fortuner along very nicely and had that extra bit of punch when planting the foot, especially after pressing the PWR button.

That’s pretty good considering it’s a dedicated seven-seater four-wheel-drive with a kerb weight of just over 2.1 tonnes. Given the 80 litres of diesel the Fortuner carries, you will achieve reasonable range out of a tank.

It was a shame I didn’t get to take this vehicle off-road because while you can drive it in 2WD on the road, it has designated high and low-range 4WD modes with automatic locking hubs. 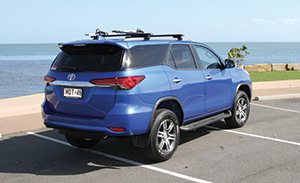 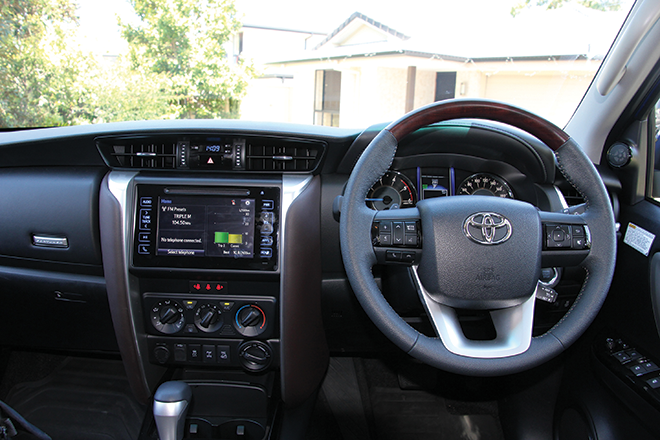 In addition, you just have to push a button to engage the rear diff lock. Combine this with Toyota’s Downhill Assist Control and you end up with a capable off-roader.

Internally, the Fortuner had plenty of room, especially in the front seats and first row of rear seats. Even with the driver’s seat positioned well back, I could comfortably sit in the seat behind. The Fortuner is a seven seater but the very rear seats, which fold up on the side, are designed more for kids.

One particular feature I liked was the roof-mounted air-conditioning vents for each row of seats. The dash has a classy look with a large touchscreen display, though satellite navigation is not standard on the GXL. Additional features included fuel usage data that could be viewed in various ways, including on the touchscreen and the information port next to the odometer.

Externally, the look of the new Fortuner bears some similarities to the sleek new HiLux, especially when looking at the front end. The Fortuner GXL comes standard with fog lights, colour-coded mirrors and enough chrome to give it a sophisticated look. Alternatively, throw on a set of steel rims and some mud tyres and you will have transformed the car to look much more aggressive (there was a tricked-up example in the Motorama Toyota Moorooka showroom when I was there).

Overall, the Toyota Fortuner fills a niche in the market and complements the range of existing Toyota models. If you are after a good-sized SUV that has serious off-road and towing capabilities, I’d recommend checking it out.

For more information on this or other vehicles in the Toyota range, drop in and see the team at Motorama Toyota. Motorama’s Moorooka showroom has a massive touchscreen that allows you to check out the whole range inside and out.

You can even add a host of optional extras to see how they will look while also checking out the entire colour palette for each model.