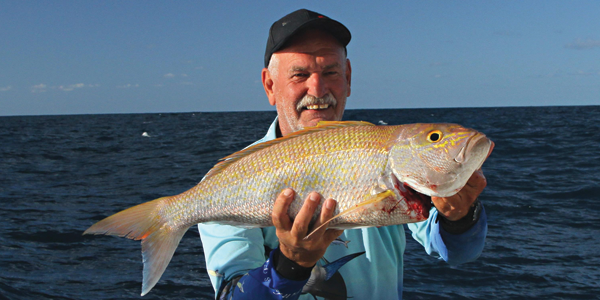 One of the many rosy jobfish hooked on squid.

Trip from Bribie Island to Yeppoon

SOME days I have to pinch myself to see whether I am dreaming or if life really can be this good. I was recently invited to come on board a 58’ Riviera as crew on a trip from Bribie Island to Rosslyn Bay in Yeppoon. We were to accompany another 18 boats cruising/sailing/motoring to Rockhampton over a 10-day period.

The trip would see us anchor on the Fraser Coast, at Tin Can Bay, Kingfisher Bay, Bundaberg Marina, Pancake Creek, Lady Musgrave Island, Heron Island, Great Keppel Island and finally Rosslyn Bay. It has been a long time since I was seasick but I certainly felt the effects during the first night, when we decided to anchor side-on to the swell in a 20-knot breeze.

I call it a breeze because the wind soon increased to almost 40 knots for the next few days. Luckily we were able to find some good shelter in Tin Can Bay Marina. Most of the other boats travelled north at about eight knots, so we were able to do a bit of sightseeing and fishing because our boat was capable of 37 knots.

However, going this speed meant we burned 500 litres of fuel per hour, so we settled down to 20 knots, which only burned about 200 litres per hour. I am sure we must have cruised over some magnificent fish on the way up to Pancake Creek but it was just too uncomfortable to fish in those conditions, so we sat on the back deck and sipped on great-tasting refreshments.

At one stage I even launched the rubber ducky and caught a couple of doggie mackerel for dinner, but that was too much hard work, so once again we sat back waiting for the wind to drop. Two days of sitting around doing nothing was driving us crazy, so we decided to travel to Lady Musgrave Island for a look.

The waves were breaking over the upstairs cockpit but we finally arrived at Lady Musgrave Island, anchored the boat, sat back and did nothing. At least now we were parked over a reef. I looked off into the distance and saw a trawler crashing its way through some spectacular waves, but that was about the only exciting thing that happened for the next two days.

Finally, we woke one morning to find that the wind had dropped to just 15 knots, so we decided to head north towards Heron Island. Last year we did a similar trip and found a spot in about 80m of water where we caught pearl perch and rosy jobfish, so set a course for this area.

The wind was still blowing when we arrived and dropped the anchor. I find it a bit difficult to fish with soft plastics in deep water while anchored, especially when the tide is roaring past, but I managed to hook a couple of mack tuna before switching to pillies and squid.

My first fish was a stonking pearl perch that weighed almost 6kg, and it was soon followed by another about the same size. A few minutes later, my little three-piece travel rod bent over hard and after quite a long fight a 10kg snapper broke the surface. You can catch the biggest fish in the world and you can have the best camera in the world, but if your mate is also catching excellent fish, it is really hard to get them interested in taking photos.

As a result, the quality of the accompanying photos leaves a lot to be desired. Nevertheless, at least I’ve got photos this month. The tide was still roaring past, so I sat back to give the other two passengers the opportunity to catch fish without tangling their lines.

The boat is 17’ wide, which gives you a decent amount of separation. Fish seemed to be coming in thick and fast but most were either hussar, javelin fish or fusiliers. Amazingly, many of the hussar were almost 1kg and too good to use as bait. One of the guys decided to use squid for bait and immediately caught a rosy jobfish of about 6kg.

From then on, every time squid was used we hooked another rosy jobfish. Boy do they pull hard. We had just about boated our limit when something big grabbed a hold of my line. I wasn’t sure what it was because it just kept pulling line from my reel.

With just 30lb braid and 20lb trace, I wasn’t game to tighten the drag too much. I had previously set the drag to 12lb, which would allow for the knot and have a few pounds to spare. The other two blokes on the boat kept telling me to hurry up because it was just another hussar, but this fish was fighting me all the way and wouldn’t leave the bottom.

After about five minutes I managed to regain most of my line and finally lifted the fish off the bottom, but it was almost as determined to stay near the bottom as I was to get it to the top. It must have been 10 minutes later when we finally saw some colour and I became really excited. About 3m down I saw the biggest red emperor I had ever seen.

We had to use the gaff because the fish wouldn’t fit into the net. After a few high fives, we weighed the fish at 19.83kg.
Surprisingly, that was the only red emperor we caught. I don’t normally keep too many fish, but when I get a chance to catch fish of this quality, I do like to take one or two home with me.

After such a great day, we decided to head to Great Keppel Island and celebrate. The next morning we woke just as the full moon was setting over the islands before heading for Rosslyn Bay. The owner of the boat chose to leave it there for a few months to allow us to do a number of trips to Swain Reefs until we cruise back down in November.

If that news wasn’t good enough, when I arrived home I received a phone call from Tim at Coastal Powerboats to say my new Stessl was ready to be picked up. I must admit, I was like a kid with a new toy. I haven’t slept in it yet but I’ve come very close.

Now I have to fit the new GPS/sounder, autopilot and a few lights, and I will include the statistics in the next issue.
I can tell you it is a very quick and quiet boat. Until next time, may all your fish be hungry.

If there is one thing that Frank Oostenbroek (FrankO) is passionate about, it's fishing with soft plastics. Whether it is in fresh water, estuaries or out chasing marlin, FrankO has proven his ability to continually to catch the big fish. FrankO offers a variety of services including a fishing school, photography and electrical fit-outs on boats.
Previous Calm weather off Kawana
Next Bennett self-levelling trim tabs video review