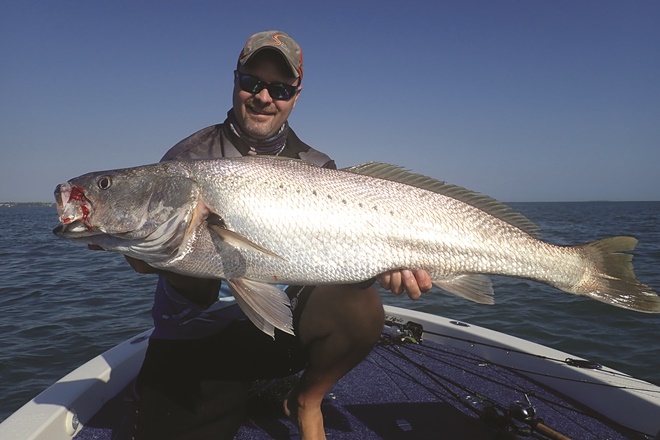 The author with a lovely 1m Moreton Bay jewfish that took a small 3.5" Molix RT Shad plastic on a TT 1/2oz jig head.

FINALLY southeast Queensland has got some much-needed rain and relief from the heat and wind.

Dropping water temperatures and the influx of fresh water should fire up the prawns and fish over the coming month and make for great fishing.

Longtail tuna have improved in numbers and regularity, feeding off the surface throughout Moreton Bay since cyclone Oma. Unfortunately, sharks have been a problem, so try increasing the size of gear you are using to beat them. Fishing heavier lures such as stickbaits allows the use of heavier tackle.

PE4-5 rods and lines may not seem sporting but they can be effective and I’d rather land the fish than lose it to a bloody shark. If a tuna randomly picks up speed during the fight, this usually means it is being chased by a shark, so ‘free-spooling’ the tuna to allow it to get away from the shark can help save the fish from being eaten. April can certainly be a good month for catching tuna in the bay and I’m hopeful this could be a good year for them.

Reports of big snapper have come from throughout Moreton Bay’s middle parts at the time of writing. Fishing deeper water of 10m-plus has seen cracker snapper over 80cm landed. Soft vibes and soft plastics have been getting the results of late. Targeting the up-current section of a large structure can be successful for these big bay snapper because they like to hold in the down-current area created by the current hitting the structure and rolling back down, sucking bait down with it for the snapper to feed on.

The edges of the islands throughout the bay will be worth a look this month for some early morning snapper action too. Prawn imitations can be a viable option at this time of year because the snapper can focus on them while they are about.

I had a good session on solid bay jewfish recently, with fish ranging in size from mid-80cm to 1m. The fish were scattered across a section of bottom, which is a little unusual because they tend to stick in tight schools, though I have experienced this a couple of times before throughout Moreton Bay. This makes it a lot easier to position the boat over the fish than if they are in a tight school.

When jew are scattered over a large area, anglers can set up long drifts and fish can be hooked randomly during the drift. This scenario requires a lot less skill than when they are tightly schooled, which necessitates precise drifts and casts to where the fish are holding in a small area with deep water and strong current. Sharks have still been an issue from time to time but hopefully they back off as the water temp drops.

Jacks have been about in good numbers of late and most anglers will take advantage of targeting them over the next month or two before they start to slow as we move towards winter. Rolling soft plastics along pontoons has been a very popular way to target jacks over the past few months, especially in the Gold Coast systems that have an abundance of jacks, such as the Coomera and Nerang rivers. The Live Target Mullet and Herring have been very popular options for pontoon work this season. They are very realistic and swim just like the real thing, and with the addition of some weight to the nose can be swum at speed, which seems to turn on the nasty red fish.

Banging hard-bodied lures over the rocks and through the timber has accounted for plenty of mangrove jack as well. Topwater lures will be a popular choice over the next two months because the prawns are moving about, and the recent rain will help this cause no doubt. The Lucky Craft G-Splash 80 has probably been the most popular jack surface lure over the past few years and is well worth having in the kit for targeting jacks off the top.

April is a great month for a huge range of species in southeast Queensland and it’s well worth getting out and having a go.

Peter Herbst has 30 years of fishing experience around SE QLD. Everything from whiting to marlin has been a target at some stage but these days Peter enjoys nothing more than casting lures.
Previous Understanding the impact of recreational fishing
Next Yeehaw to Kings Canyon – caravanning