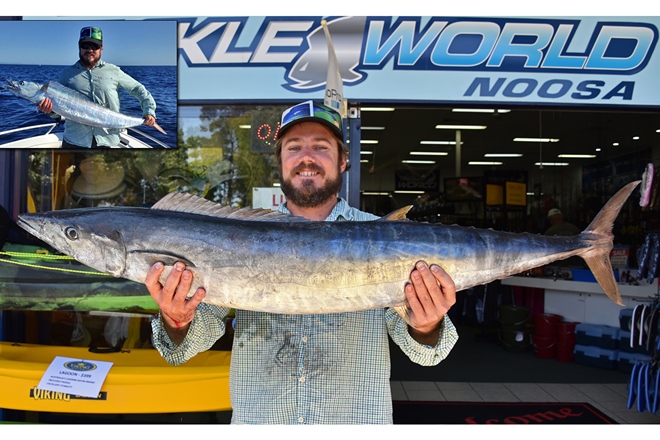 Dave Hirst from Peregian Springs won the $50.00 Davo's Fish of the Week prize with this 11kg wahoo which he boated at Sunshine Reef. Photo: www.fishingnoosa.com.au

Weather and Fishing Heating Up in Noosa

With some sensational weather over the weekend anglers were out in force, Whiting were in good numbers along the Gympie Terrace with the best bit first thing in the morning. The Frying Pan and munna point areas also saw quality fish. Prawns, blood and beach worms were highly successful baits taking some 42cm+ models. Surface lures in the early morning and late afternoon around the sound, woods bays and Tewantin boat ramp areas have provided some good action on Giant Trevally and big eye trevally, the Jackson Athlete surface walker is perfect for the whiting while its bigger brother the Jackson Risk Bait works well on the trevally.

Live fish baits fished around structure in the deeper areas of the ski run has been successful on mangrove jack. Strada 70mm dredge lures retrieved through the same areas also been proving effective on the jacks. Good quality sand crabs have been taken from around weyba creek, while mud crabs are also being potted from the stretch between the lakes and in the lakes themselves.

On the beaches, Teewah beach has produced some good quality whiting on live beach worms. Flathead have also been inhabiting the same gutters along the Noosa North Shore, Anglers casting pilchards have gotten onto some quality tailor still making their way south from Frazer Island. The gutter along Castaways, Marcus and Coolum beaches have providing good numbers of whiting, bream and dart.

The Offshore anglers got out through the week and over the weekend. Squire, snapper and trag jew where all taken from North Reef. Fishing floaters and bottom bouncing pilchards and squid, Mahi Mahi and wahoo also came from North Reef whilst trolling, there have been some small black marlin reported from inside Lagoona Bay. Land based anglers will be excited by this with the opportunity to tangle with a sail fish off the Noosa Headlands, Chardons Reef has also seen some marlin harassing teasers and larger whole baits. Jew, squire and pearlies have also come Chardons.

Bass are still taking surface lures on the edges At Lake McDonald early morning and late afternoon. Lures like the Jackson Pygmy Pop being ideal to fish across the top of the weed.